Randolph "Whitey" Whitley was a villain in the 2000 AD comic strip Judge Dredd and was the antagonist who appeared on Judge Dredd's first comic "Judge Whiter" (prog/issue 2 made in 1977).

Whitey was a small time leader of a gang with a deep hatred of the Judges. In the first story, he and his gang were gunning down Judges with laser cannons from the Empire State Building. After Whiter guns Judge Alvin, Chief Judge Goodman suggested bombing it, but Dredd convinces him that he should go for them as it will show the population that it's not a good idea to mess with Judges. He goes to the Empire State Building where Whiter and his gang are hiding out and set's his bike on automatic, after the gang discover it was unmanned, Dredd appears behind them and manages to gun them down and arrests Whitey, sentencing him a lifetime for the murder of a Judge and sends him to Devil's Island, a place where there's endless noise and a prison with no need for walls as it is located on a traffic island where the traffic never stops and attempting to cross the road means certain death. He managed to escape from the Devil's Island twice before he was eventually killed in the Judge Dredd's 10th anniversary comic.

Whitey was a stubborn and rude man who completely hated the Judges and hated Dredd more than anyone else due to him sending Whiter to Devil's Island. He's shown to be smart though, due to him escaping from Devil's Island twice. 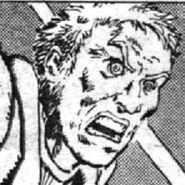 Dredd guns down the gang and arrests Whitey.
Community content is available under CC-BY-SA unless otherwise noted.
Advertisement