Earth (The land of Ooo)

Wipe out the house people

Business Creatures
The Why-Wolves are characters that appear in the Adventure Time episode "Donny." They are monsters that resemble werewolves, but have a more inquisitive nature, and will sometimes pause to give lectures. One Why-wolf explains that their species is possessed by the spirit of inquiry and bloodlust.

They resemble classic, modern werewolves, although simply by tearing away tufts of fur, they transform into more civilized versions of themselves. After this transformation, they wear grey suits and glasses. It has been seen that some Why-wolves have two heads with one eye on each.

In the episode "Donny," while Finn and Jake were trying to help Donny stop being a jerk, Finn hears a call for help from the house people to discover vicious wolves attacking them. He tries to fight them back and manages to toss two of them into a well. Finn wonders what is with the wolves when one of them in the well changes into a business suit and explains.

He says they are Why-Wolves who are trying to wipe out the house people so they can populate. The Why-wolves are usually kept in check by Obnoxygen, a gas produced by Donny the ogre that is deadly to Why-wolves. However, if left unchecked, the Why-wolves would eat the House People and grow in population until they attract the Cosmic Owl, who will subsequently devour them.

Finn then rushes back to the tree house to find Donny changed. So, he and Jake try to get him to be a Jerk again by making fun of him. This causes everyone both the house people and the why-wolves to laugh at him. This makes him so mad that he reverts back to being and jerk and produces Obnoxygen driving the wolves away. 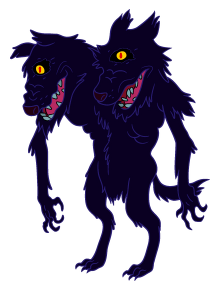 Two-Headed Why-Wolf
Add a photo to this gallery

Retrieved from "https://villains.fandom.com/wiki/Why-Wolves?oldid=3946892"
Community content is available under CC-BY-SA unless otherwise noted.