Burning children in her oven.

The Wicked Witch is a minor antagonist in the Blood and Wine expansion of The Witcher 3: Wild Hunt. As everyone in the illusion, she is a stereotypical fairytale character, in her case the evil witch who eats children. She lives in the fairytale illusion created by the royal mage when Syanna and Anarietta were children.

When Geralt enters the fairytale illusion to retreive Syanna who has been imprisoned there, he eventually arrives at the house of the Wicked Witch where he finds the witch in dispute with Syanna.

Syanna attempts to free someone from the witches' oven but the hag forbids it. She forces Syanna to stay away from the oven as the person inside has eaten from her gingerbread. When Geralt approaches, the Wicked Witch claims that despite his age, he will make a fine meal once he has been seasoned. She then jumps on her broom and attacks Geralt, maniacally cackling while doing so.

In the battle the witch either creates venomous plants who attack Geralt or flies above him to empty her cauldron above him, burning him with the liquid inside. She can also creates panthers out of soup who then attack Geralt. After knocking her off her broom with Aard, Geralt manages to defeat and slay the Wicked Witch. After the hag and her broom are slain, Syanna frees the person from the oven who is revealed to be Jack (from Jack and the Beanstalk). 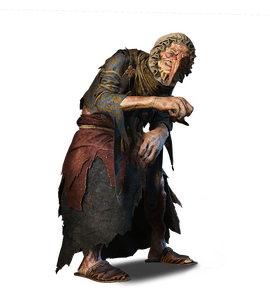 The journal image of the witch 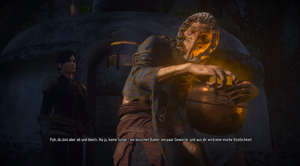 The Witch with Syanna 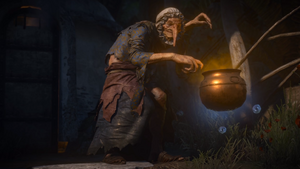 The Witch prepares to attack
Add a photo to this gallery

Retrieved from "https://villains.fandom.com/wiki/Wicked_Witch?oldid=3545043"
Community content is available under CC-BY-SA unless otherwise noted.