The Wicked Witch
Witch of the West

The Wizard of Oz

Getting revenge on Dorothy Gale.

Get revenge on Dorothy for killing her sister.
Conquer all of the Land of Oz.
Kill Batman and his gang.
Get her broom back from Sesame Street (all failed).

The Wicked Witch of the West is the main antagonist of The Wonderful Wizard of Oz, the first novel of the famous Oz series, and its classic 1939 film adaptation The Wizard of Oz. She is a malevolent witch who rules over the Winkie Country, as well as Dorothy's arch-nemesis.

While this relationship is not mentioned in Baum's books, in the movie, the Witch is the sister of the Wicked Witch of the East, who is killed when Dorothy arrives in Oz. The Witch asks aloud, "Who killed my sister?" (except with more calculation than sorrow). As a result, The Wicked Witch of the West's role is made more prominent as she seeks revenge against Dorothy for killing her sister. When Dorothy claims the death was an accident, the Witch of the West replies "Well, my little pretty, I can cause accidents too.".

It is from this movie that popular culture gets the oft-quoted phrase, "I'll get you, my pretty, and your little dog too!".

Her other motivation is to get the powerful Ruby Slippers (changed from the Silver Shoes of the book). She often, but not always, flies on a broomstick (as opposed to her umbrella in the novel), and has a crystal ball through which she can see happenings elsewhere.

The Wicked Witch of the West is also famously featured in the book and theatrical production Wicked, which explores her past and portrays her as a tragic character and the protagonist, while the Wizard is the true villain. Here, she is given the name Elphaba Thropp, a pun on the name L. Frank Baum. The role was originated by Idina Menzel.

In Wicked Witch of the West is featured in an episode of Sesame Street. In the episode, the Witch flies over Sesame Street and loses her broom. The magical cleaning tool falls into the hands of David; afraid of what the witch might do with it, he refuses to give the broom up. The Wicked Witch responds by making it rain inside Hooper's Store, and even threatens to turn Big Bird into a feather duster and David into a basketball. Oscar the Grouch is the only one who takes to her, even to the point of having a crush on her. Big Bird eventually warms to the witch, and is saddened when she leaves she tells him that one day she will return (only to drop her broom yet again). The episode was considered too scary for the target audience many viewers, and as such, the episode was pulled from airing, with the episode only resurfacing online in 2022.

In the 1976 Paul Lynde Halloween Special, Margaret Hamilton again reprises her role as the Witch, this time teaming up to torment the hapless Lynde (who himself played a Warlock on Bewitched) with Billie Hayes as Witchiepoo from HR Pufnstuff.

The Muppets' Wizard of Oz

Oz: The Great and Powerful

The Wicked Witch of the West appeared as the first boss in Lego Dimensions after Dorothy and her friends were captured by Lord Vortech, who was in need of her Ruby Slippers. When the Wicked Witch of the West saw the three protagonists of the game, she thought WildStyle was Dorothy and Batman was her dog. She then sees the keystone and orders her flying monkeys to get it for her. After she acquires it, she flies back to her castle. As Batman, Gandolf, and WildStyle makes their way towards her castle, she acquires new powers from the keystone and uses it to create portal everywhere. Once you place cages in front of the portals to capture her, she breaks free. After that, you use the spare pieces of the cages to build a water cannon and use it to squirt her with it. She then disintegrates and falls into a portal summoned by Lord Vortech.

She also appears in the same game as a playable character, via the 71221 Fun Pack.

The Wicked Witch of the West makes a cameo appearance in the 2021 film Space Jam: A New Legacy, the anticipated sequel to the 1996 Warner Bros. hybrid film Space Jam. She appears alongside other villains from other Warner Bros. properties such as Agent Smith, the 1989 incarnation of Joker, the 2017-19 incarnation of Pennywise the Dancing Clown, and Lord Voldemort as one of the speculators of Al-G Rhythm's basketball game. Much like in The LEGO Batman Movie, the Wicked Witch of the West has been reunited with Agent Smith and Lord Voldemort.

It has been reported that Mila Kunis would be playing the role as her.

During an alternative timeline of The Wizard of Oz, Glinda gave Eveline (the Wicked Witch of the West) a second chance by reviving her and stripping her of her powers (thus storing them into her broom). Much later, Eveline devises a plan where she sends one of her monkeys to give Scarecrow, Tinman, and Cowardly lion some sleeping ribs to make them fall fast asleep and then send Ozzy to quietly open the windows, unfortunately Ozzy slips and falls waking Dorothy's friends in the process, but Eveline and the other flying monkeys manage to stop them and get her broom back. Eveline then curses Scarecrow with being too knowledgeable, Tinman with being depressed, and Lion with being enraged and banishes them back to separate locations. She then turns Goliath into a chicken after he refuses to arrest his own son "Ozzy" and orders derp to arrest both of them, Ozzy flees in terror as they chase him and accidently grabs Eveline's broom, Eveline orders Ozzy to give back the broom, but Ozzy flies away with it (since her broom is only powered by fear), She then orders her soldiers to find Both Ozzy and the broom. Meanwhile, Eveline orders her minions to bring her tower over to the emerald palace (since Glinda became frozen thanks to Gabby accidently). Much later as she spends time on the throne as the new ruler of Oz, her minions come back with urgent news about Ozzy stating that he's looking for the Lion, Tinsman, and Scarecrow making Eveline more mad being forced to take drastic measures by sending her pet Wingo (a giant, winged gorilla). Much later, her minions bring Gabby instead of Ozzy (it's unknown of what relationship they share, but considering that Glinda is her aunt, it could be stated that Eveline is Gabby's mother). She uses a machine to provide a message to Oz and a warning to Ozzy that if he doesn't return with the broom then Goliath will become nothing but chicken soup. Tinsman, Lion, and Scarecrow go off to face Eveline only to have the three of them defeated easily. Ozzy then confront Eveline and then refuses to give the broom and explains to the other flying monkeys that they work for Eveline out of fear. Ozzy then breaks the broom and Eveline sobs by seeing her broom destroyed (and thinks that her magic is gone forever). The flying monkeys then rebel against her, but the broom starts to spark making her realize she still has enough power and turns all her minions into sheep, and goes to grab the other piece. Ozzy quickly grabs it and flies away, Eveline gives chase but Ozzy manages to lure her to a fountain (depicting Dorothy), causing her to fall right into it and melt again. Despite the fact that the fountain had a lot of water, it's likely that she was melted for good and never came back. 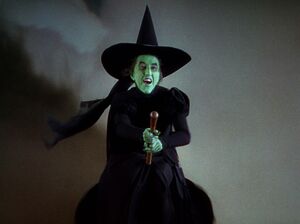 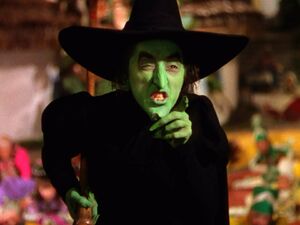 "I'll get you my pretty, and your little dog too!" 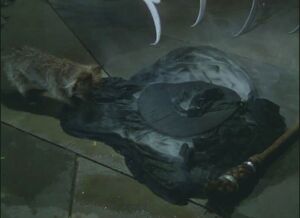 The Wicked Witch of the West meeting her demise, as she gets melted after Dorothy throws water onto her in order to save the Scarecrow. 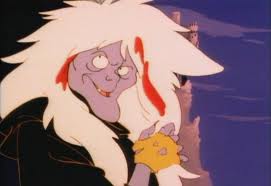 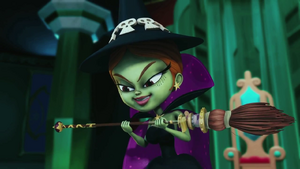 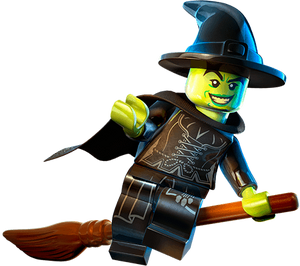 Wicked Witch of the West as seen in Lego Dimensions. 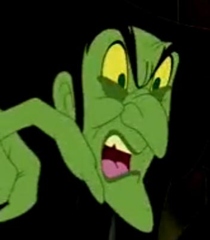 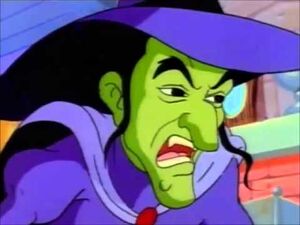 The Wicked Witch of the West in The Wizard of Oz animated series. 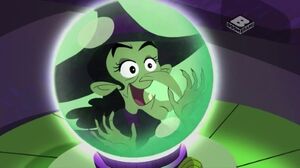 The Wicked Witch of the West in Dorothy and the Wizard of Oz. 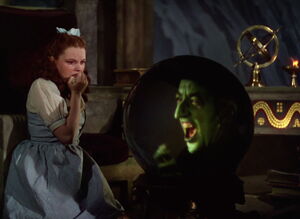 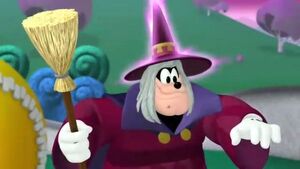 Pete as The Wicked Witch of the West in the Mickey Mouse Clubhouse version. 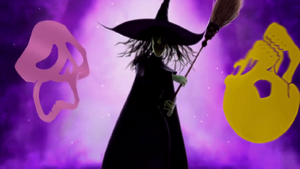 The Wicked Witch of the West in Legends Of Oz: Dorothy's Return. 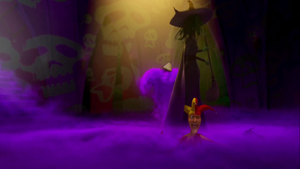 The Wicked Witch treating her younger brother, the Jester, poorly. 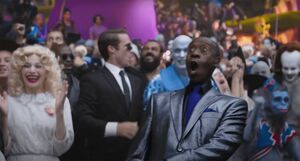 The Wicked Witch of the West with other Warner characters in Space Jam: A New Legacy. 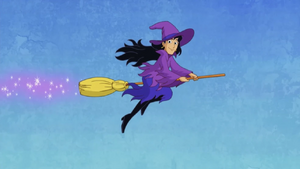 The Wicked Witch of the West in Dora the Explorer. 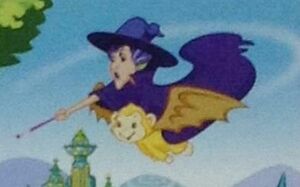 The Wicked Witch of the West in Strawberry Shortcake (2003). 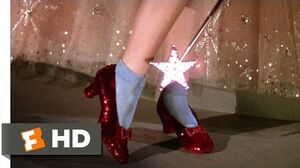 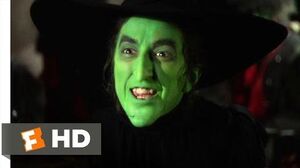