"I'll get you, my pretty- and your little dog too! HAAAAA HA HA HA HA HA!"
— The Wicked Witch of the West threatening Dorothy Gale and Toto.

The Wicked Witch of the West was Dorothy's arch-nemesis and the main antagonist in the 1939 classic film, The Wizard Of Oz.

She was portrayed by actress Margaret Hamilton who also played her "reality" counterpart Miss Almira Gulch.

In the original book, she is described as a hideous form, and a notable feature being an enchanted eye that can see vast distances beyond her castle walls. In the classic movie, the Wicked Witch was stooped, green-skinned, and dressed entirely in black. In many people's minds, this representation of The Wicked Witch has become an archetype for human wickedness, as well as a stereotype for the "witch" character in popular culture.

While this relationship is not mentioned in Baum's books, in the movie, the Witch is the sister of the Wicked Witch of the East, who is killed when Dorothy arrives in Oz. The Witch asks aloud, "Who killed my sister?" (except with more calculation than sorrow). As a result, The Wicked Witch of the West's role is made more prominent as she seeks revenge against Dorothy for killing her sister. When Dorothy claims the death was an accident, the Witch of the West replies, "Well, my little pretty, I can cause accidents too."

It is from this movie that popular culture gets the oft-quoted phrase, "I'll get you, my pretty, and your little dog too!"

Her other motivation is to get the powerful Ruby Slippers (changed from the Silver Shoes of the book). She often, but not always, flies on a broomstick, and has a crystal ball through which she can see happenings elsewhere.

Appearances In other media

The Wicked Witch of the West is also famously featured in the book and theatrical production Wicked, which explores her past and portrays her as a tragic character and the protagonist, while the Wizard is the true villain. Here, she is given the name "Elphaba", a pun on the name L. Frank Baum.

In the 2005 TV-movie The Muppets' Wizard of Oz, the Wicked Witch of the West is the main antagonist. She is the sister of the Wicked Witch of the East, Tattypoo, and Glinda, who once performed as a pop music group, Four Little Pigs. The Witch pursues Dorothy Gale for the silver slippers, which she felt by familial inheritance rights should have gone to her.

As in the original The Wizard of Oz novel, but not the 1939 film portrayal by Margaret Hamilton, the Wicked Witch wears an eyepatch. Beneath the patch lies a glass eye which gives her telescopic vision. She also sports an enchanted biker cap with which she commands her Flying Monkeys. She receives her comeuppance when tap water is used in her bath.

The Wicked Witch of the West also appeared on Sesame Street in 1976 (Episode 0847), with Margaret Hamilton reprising her role from the 1939 MGM film The Wizard of Oz.

In the episode, the Witch flies over Sesame Street and loses her broom. The magical cleaning tool falls into the hands of David; afraid of what the witch might do with it, he refuses to give the broom up. The Wicked Witch responds by making it rain inside Hooper's Store, and even threatens to turn Big Bird into a feather duster and David into a basketball. Oscar the Grouch is the only one who takes to her, even to the point of having a crush on her. Big Bird eventually warms to the witch, and is saddened when she leaves she tells him that one day she will return (only to drop her broom yet again).

Named Theodora in the 2013 Disney film Oz: The Great and Powerful directed by Sam Raimi, she is portrayed by Mila Kunis. Theodora is the first person Oscar meets when he arrives in Oz. Theodora is a very beautiful, naive witch who is protected by her powerful and overprotective sister Evanora . Theodora only wants peace to come to the Land of Oz and truly believes Oscar is the prophesied wizard they have been waiting for. However she is manipulated by Evanora, who tricks her into eating an apple that removes all good from her heart and transforms her into the Wicked Witch of the West. 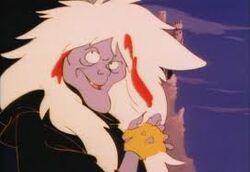 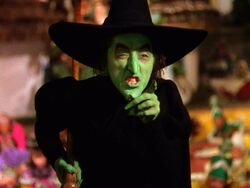 Retrieved from "https://villains.fandom.com/wiki/Wicked_Witch_of_the_West?oldid=557393"
Community content is available under CC-BY-SA unless otherwise noted.