Wife Petter is a minor antagonist in the anime series Panty & Stocking with Garterbelt. She first appeared in the episode 1 Angry Ghost as the main antagonist.

Wife Petter is a Ghost with a physical appearance of a black-furred Chihuahua with a pink tuft of curly hair, lipstick, and a pink apron.

In 1 Angry Ghost, her spouse Husband Petter was murdered on November 27 in Daten City's Central Park, and it was claimed that Panty and Stocking were the ones responsible. During a trial for the sisters, she was called to the stand, where Wife breaks down into tears, begging for her husband to return to her. However, it is revealed that Husband's body has large fang marks rather than marks made by angelic weapons, thus showing Wife is the actual culprit.

She later admitted to having killed him on the night of November 27 because she thought that he was stupid for trying to be friendly and nice. She exclaimed that ghosts are supposed to be evil and wreak havoc. After that, she revealed her true form (boasting a monstrous, quadruple jaw full of sharp fangs) and started chasing the judge, but was killed rather easily by the Anarchy sisters. 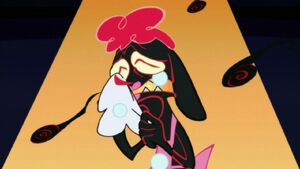 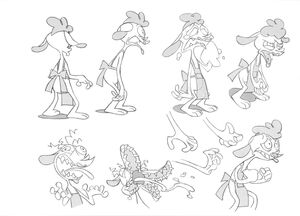 Retrieved from "https://villains.fandom.com/wiki/Wife_Petter?oldid=4066727"
Community content is available under CC-BY-SA unless otherwise noted.