Minding their own businesses until someone makes them mad

Defeat Mario and Luigi (if they anger them).

Help out Mario and Luigi (if they please them).

The Wigglers are a hostile species that often appears as an underling of Bowser in the Super Mario series. It is a caterpillar with spherical segments.

All Wigglers have been voiced by Dolores Rogers.

Wigglers make their first appearance in the first level of the Forest of Illusion. They cannot be jumped on, as that will only make them angry and move faster. They can be beaten by using a Super Star, throwing an object at them, or by Yoshi eating them.

Wiggler was a minor boss in the level Tiny-Huge Island. To access Wiggler's chamber, Mario had to become large, then ground-pound the top of the island, smashing open a small hole, draining a torrent of water into the chamber. Then Mario would have to shrink in size to enter the chamber. When he does, he finds Wiggler, who is angry at Mario for flooding his home, and claims that everything went wrong since Bowser gave him a Power Star, and that the star makes him feel strange. Mario had to defeat Wiggler by stomping on him three times. After that, Wiggler would admit defeat, give Mario the star, and claim that he felt better.

Wiggler appeared as a boss in the third level of Gelato Beach. Enraged at being knocked of the Sandbird's tower, it goes berserk and charges around randomly.

In this game, Wiggler was incredibly heavy and could send Mario flying by building up momentum, and then, ramming into him. It could only be defeated when Mario watered the dune bud sandcastles to make them grow, and having Wiggler trip over them, sending him flying onto his back. Mario could then ground-pound a section of his stomach.

Wigglers only appear in the Japan-exclusive e-Reader level "Rich with Ropes".

Wigglers are found in Honeyhive Galaxy, Beach Bowl Galaxy, Gusty Garden Galaxy, and Gold Leaf Galaxy. When jumped on, they turn red and temporarily chase after Mario. They can be defeated by spinning them to flip it and then jumping on it.

Wigglers only appear in World 5-2. Larger Wigglers referred to as Big Wigglers appear later in the level and have the ability to swim through poisonous water, which Mario can jump on their back to safely cross.

Wigglers act the same way as the first Super Mario Galaxy, although some will start red and stay aggressive. They are found in Puzzle Plank Galaxy, Tall Trunk Galaxy, and Throwback Galaxy. Massive undefeatable Big Wigglers appear as obstacles in Supermassive Galaxy.

Wigglers are only found in World 3-Warp Cannon and World 3-4.

Wigglers and Big Wigglers appear in Soda Jungle, Seesaw Bridge, and Wiggler Stampede. Unlike the other games, they thrust their backs to the rhythm of the music.

A varient type of Wiggler called the Tropical Wiggler is introduced, native to the Lost Kingdom and the Moon Kingdom. When captured by Cappy, Mario can stretch out to reach small platforms.

Wiggler makes its only playable debut in Mario Kart 7, unlockable by placing first in the 150cc Leaf Cup. It is a Cruiser-type racer, with an increased buff to its speed, weight, and off-road stats.

Wigglers appear in the Mario Party through a few boards and hazards in minigames. In Mario Party 5, Mario Party 6, and Mario Party 7, a Wiggler orb can be obtained from a shop. When activated, the Wiggler morphs into Flutter and flies the player to the Star Space. In the story mode for Mario Party DS, Wiggler's Garden is terrorized by a massive Piranha Plant, with Wiggler rewarding the player with the first Sky Crystal should they defeat it. In Mario Party 9, Wiggler is the boss of the Toad Road board and fought in the minigame "Wiggler Bounce". The players have to jump on Wiggler's segments as it roams across the area, with one segment colored red that gives three points. At half health, the Wiggler moves faster.

Wigglers can be spawned as enemies in Super Mario Maker and Super Mario Maker 2. They can be placed regularly or shaken to start out aggressively. If given wings, they jump in high arcs. In nighttime themes in the sequel, Wigglers float instead of walking.

A single Wiggler appears in the first hole of the Wiggler Park course in Mario Golf: World Tour. If a ball hits it, it gets angry.

A Wiggler appears in Mario Super Sluggers as a playable character. In Challenge Mode, Wiggler serves as a roller coaster of Yoshi Park, but speedily races across the track. Mario must change the directions of the rails to steer Wiggler off-track, which calms it and it joins the team. It has good chemistry with Blooper, King Boo, Petey Piranha, and a yellow shirt Mii.

Although it remains unused, a graphic for a Wiggler exists in the code for Super Paper Mario, showing that at one point, Wigglers were supposed to be found in the game.

A friendly Wiggler serves as a major character in World 3. He blocks the entrance to the World by sleeping in the middle of the path, only waking up when Mario uses the Trumpet thing. When explaining that the forest was polutted with poison, he is captured by Poison Bloopers and split into pieces by Kamek. Mario has to capture the four missing segments across the World and bring them back to Wiggler. Once all four segments are reattached, Wiggler aids Mario in reaching an island where Gooper Blooper was poisoning the water with its ink.

Much later in the game, Wigglers evolves into a Flutter and flies Mario to Bowser's Sky Castle.

Once again, a Wiggler appears as a boss, this time in the Chucklehuck Woods. Mario and Luigi are forced to stomp on Wiggler to get around him. Wiggler gets angry, and blocks the bros. path, and has to be defeated.

A Wiggler made an appearance as a mutated creature called Swiggler. Swiggler was a strange creature used for powering up The Shroobs spaceships, by drinking vim, then powering the ships attached to a long cord on its rear.

Wigglers only appear in Morton's Wood Door Hysteria Hotel. Unlike other games, to defeat them, Mario must jump on the head, causing the Wiggler to shrink to the next segment until no more segments remain.

A giant Wiggler serves as the boss of Fury Volcano. It runs back and forth through the linear platform, causing rocks to fall down. To defeat it, Peach has to use the Rage vibe to push down a pillar, making it spring up and flip the Wiggler over to expose its weak belly. As the Wiggler takes damage, it spews smoke from the flower that Peach can blow away with the Joy vibe.

In Super Smash Bros. Ultimate, a Wiggler appears as a Novice-level, support-type spirit that gives the user the Lip's Stick as soon at the start of a battle when used. In their spirit battle, the player must defeat a Yoshi on the Super Smash Bros. Melee version of Yoshi's Island, with the foe starting the fight with a Lip's Stick and themselves getting stronger attacks when they get enough damage.

A Wiggler appears as the first opponent fought by Luigi in the Boxing minigame.

In the Wii U and Nintendo Switch versions of Lego City Undercover, a Wiggler can be seen walking across the top of a railway tunnel.

Wigglers appear in the Super Mario World cartoon referred to as "Caterpillars". They are portrayed as aggressive given their red coloristic and sharp fangs.

Wigglers are usually very quiet minding their own business with no hint of malice very easygoing but become enraged and angry going into a berserker mood if someone messes with the flower on their head. Despite keeping to themselves and being easygoing or non hostile as long as no one damages their flower it is also mentioned that they are easy to annoy. 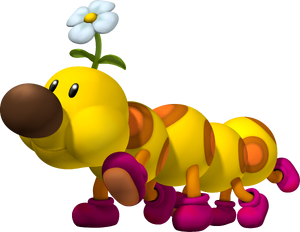 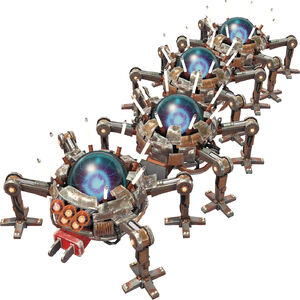 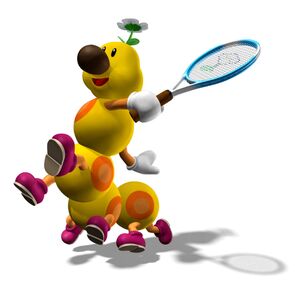 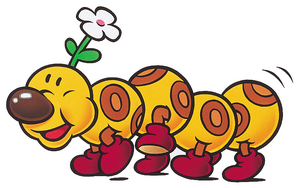