Villains Wiki
Register
Don't have an account?
Sign In
Advertisement
in: Articles under construction, Mature, Disciplinarians,
and 41 more

Leader of the Cooperate's Outpost Three

Enforcing the laws of the Cooperative.

Punishing and torturing others from their violation of her outpost's rules.

Remold the world as she and her outpost society see fit.

Use punishment and violence to make survivors cooperate.
Leave outpost three and escape to the cooperative with Miriam Mead (failed).

Wilhemina Venable is a major antagonist in American Horror Story: Apocalypse. She is one of the leaders of an organization that raises post-apocalypse outposts, an organization known as the Cooperative, which attempts to remold the world in their own image.

She was portrayed by Sarah Paulson, who also played Sally McKenna, Ally Mayfair-Richards, and the reenactment version of Shelby Miller in AHS, as well as Mary Epps in 12 Years a Slave, Dr. Ellie Staple in Glass, Dr. Zara in Abominable, Anne Gillette in Law & Order: Special Victims Unit, and Mildred Ratched in Ratched.

Wilhemina Venable is a stern woman who runs a post-apocalyptic outpost underground after the End of Days was started by Michael Langdon. Her outpost seemingly keeps the survivors inside safe, but it becomes disturbing as she and her subordinates set up strict rules to restrict several things the Cooperate deemed unorthodox, including unauthorized copulation. Anyone who violates the Cooperate's rules shall receive severe punishment, no exception. In reality, Venable and her subordinates plans to take over the chaotic world and remold it in their image. Her use over violence, as she believes, is a way to keep the survivors cooperate.

People in the outpost dressed in either purple or gray, akin to the style Victorian Britain. Venable describes the roles of those who have taken shelter in the outpost; the purples are the upper class who are destined to prolong the human race and are treated with luxury as a result, the grays are the workers who tend to the needs of the purples. Venable herself doesn't consider herself either a purple or a gray, but the face of Cooperative.

After the start of the Apocalypse, Wilhemina Venable becomes the commander of Outpost 3, one of the many outposts that is under the command of the Cooperate, under her stern administration. The Outpost 3 is based upon the former Hawthorne School for Exceptional Young Men, which some of its members brought Michael Langdon, the Anti-Christ, into power.

First appearing in the season premiere, Venable welcomes Timothy and Emily after they are taken to Outpost 3, following the aftermath of the apocalypse. She explains to them that the outpost used to be an exclusive boys school until it was converted by The Cooperative of visionary minds into a refuge. She tells the pair that they are "Purples", who are the upper-class elites who were specially selected for the survival. The others, billed as "Grays", are their servants, grateful for detachment from the fallout.

When Timothy asked Venable if herself is a Purple or a Gray, Venable claims she is neither, as she is the local Cooperative representative, and a "Face" to the Cooperative as some sort. Then, Emily bluntly asks if Venable is not a Purple. Visibly offended, Venable ignores Emily's question and starts to explain the house rules to the newcomers. They should call her "Ms. Venable." Leaving the building is forbidden, or they're not allowed to return the due to radiation hazards. Sexual contact, or any kind of "copulation", is also forbidden; the "Grays" that were executed earlier are examples. Emily and Timothy are disturbed, but Venable then calmly invites them for a dinner with other "Purples".

During the dinner time, Venable enters the common room, ringing the bell and announcing that dinner is ready. The "Purples" get served nutritional cubes, much to many's disappointment, and a frustrated Coco throws a tantrum but she doesn't notice that Venable and her henchmen already heard it and arrives behind her. Enraged, Venable slaps Coco, warning the "Purples" that even those supplies are meant for a few years and conditions must improve or options will be limited.

Facing the "Purples", Venable tells them that a carrier pigeon arrived inside the perimeter earlier, with a message from the Collective. The message reports that three other outposts have been overrun, and they are the only "civilized" people left. The rest are starving or dying. The pigeon has died of radiation contamination.

Later, Miriam visits Venable in her room, and they pretend to be "Purples", wearing their purple, presumably Victorian-era inspired attire. They conspire about dispensing sadistic punishments which Venable admits that she enjoys, and Mead, a former military agent, admits they've been making up rules and punishments as they go along; Mead set the Geiger counter to maximum sensitivity to frame Stu.

The next night, Venable presents everyone a "special treat" with a surprise of meat soup instead of the typical cubes. However, some people including Gallant suspects if there's something wrong with the soup. Then, Andre discovers human finger bones in the stew and assumes the meat is Stu's remains. Horrified and disgusted, Andre shouts this out as Coco and Gallant are so disgusted that they tried to vomit it out, though Venable insists it is not. Evie, on the other hand, rather enjoys the soup and feels nothing bothering her.

Later, Andre and others have an argument, still being traumatized by the unpleasant dinner. Dinah reminds a raging Andre that Venable also ate the meat, which would be poisoned if it were Stu's radiation-contaminated meat. Then, the "Purples" notice that the song which played in the common room on the radio for several weeks, has changed to a song called "The Morning After". Pleased, the refugees take it as a sign that they're going to be rescued.

However, for the next 18 months, the same song is playing over and over again, leaving the refugees disappointed. Nuclear winter has killed off much life outside, and yet Emily and Timothy develop a romantic relationship that is kept secret. One day, Venable announces a further ration of dwindling cubes. No longer taking it anymore, many refugees starts to protest. Gallant rages at Venable and tries to leave the place, until the perimeter alert goes off as it has a breach, scaring everyone. Soon, the gates open to a horse-drawn carriage, bearing Michael Langdon, who becomes an agent of the Collective with an unlimited clearance.

Upon arriving at the Outpost 3, Michael requests to see Ms. Venable. Mead welcomes Michael's arrival and he allows her to dispose of his horses. Then, Venable arrives to meet Michael. Michael explains that he is there to evaluate the residents for possible transfer to the last remaining sanctuary as six have been overrun, and the remaining three beyond Outpost 3 are soon to be. He could take any, all, or none of them; those who do not meet his say-so will meet the same fate as the horses, being shot dead and eaten by unknown forces. 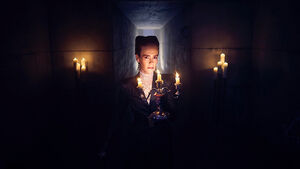 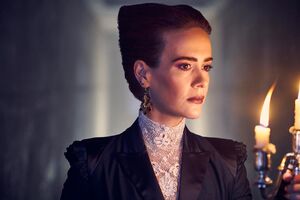 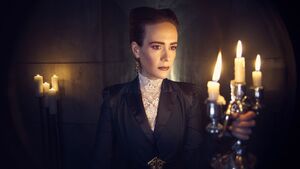 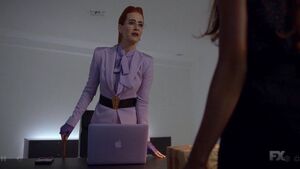 Venable prior to the Apocalypse