Dr. Jackson Arvad, better known as Will o' the Wisp, is a fictional character and a comic book supervillain from the Marvel universe. He is a physicist who gained control over the electromagnetic attraction between his body's molecules, allowing him to adjust his density (like the Vision). He is most often a foe of Spider-Man.

Jackson Arvad was born in Scranton, Pennsylvania. A former employee at Roxxon Oil, he worked in the division dedicated to electromagnetic research as a scientist. Under constant pressure of being fired, Arvad spent lots of time furthering his work on electromagnetism, getting little sleep in the process. He eventually ended up falling asleep on the job, unable to save himself from a laboratory accident that would change his life.

He ended up being caught in the electromagnetic field of a device he was working on, the device weakening the electromagnetic attraction between the molecules in his body, threatening his life. When his boss learned of the accident, he decided to let Arvad die, but not before he demanded any scientific applications the device would've had.

However, Arvad was able to save himself when he learned he was suddenly able to control the level of attraction between his body's molecules.

Will o' the Wisp was forced by his employer, Jonas Harrow, to carry out criminal activities. Spider-Man persuaded him instead to resist Harrow.

He attempted to kill his employer, Jonas Harrow multiple times but was stopped each time by either Spider-Man or inadvertently by Tarantula. Finally, he opted to simply hypnotize the man into confessing his crimes to the police.

Will o' the Wisp later first encountered The Outlaws while hunting down Spider-Man in connection with a crime. Will o' the Wisp eventually joined the Outlaws as an adventurer, to rescue the kidnapped daughter of a Canadian official. 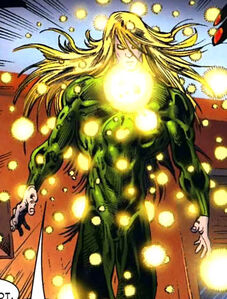 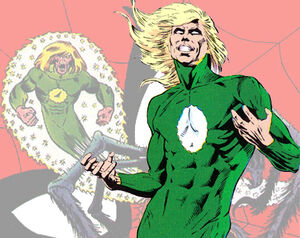 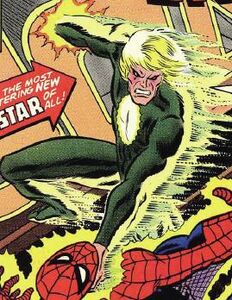 Retrieved from "https://villains.fandom.com/wiki/Will-O%27-The-Wisp?oldid=4100486"
Community content is available under CC-BY-SA unless otherwise noted.