Usurper
Will is a HumaGear who transforms into the Another Rider Another Zero-One and the secondary antagonist of Kamen Rider Reiwa: The First Generation.

He was originally a HumaGear secretary to Korenosuke Hiden until he received the Zero-One Anotherwatch from the Time Jacker Finis. With with his Another Rider powers, Will killed Korenosuke to usurp him as CEO of Hiden Intelligence and enabled the Ark to launch and instigate a HumaGear uprising against humanity.

He was portrayed by Soko Wada.

Will was the original secretary of Korenosuke Hiden at Hiden Intelligence. After he and Soreo Hiden connected with the Ark and reached the "Singularity", developing full sapience, Will began to seek to make life better for HumaGears and was dissatisfied with how humans treated them as tools. To this end, Will schemed to use the Ark to trigger a HumaGear uprising against humanity once the satellite was launched into orbit.

In the original timeline, the Ark satellite's launch was foiled when Soreo Hiden, who despite reaching Singularity was content with his job at Hiden, blew up the launch pad to prevent it from going into orbit. The HumaGears in Daybreak Town that it hacked were destroyed when Satoshi Sakurai blew up the factory to prevent them from getting out.

However, Finis interfered in the timeline and gave Will the Zero-One Anotherwatch from, allowing him to become Another Zero-One and prevent Soreo Hiden from stopping the launch. Aruto and Sougo traveled back in time to 2007 to stop Finis and Will but were unsuccessful in helping to stop the Ark's launch.

As soon as it reached orbit, the Ark broadcast a signal instigating a massive HumaGear uprising against humanity, causing HumaGears to rise up all across the world and attack humans. With his Another Rider powers, Will murdered Korenosuke Hiden and took his place as CEO of Hiden Intelligence. With the resources of Hiden at his disposal, Will used the company to supply the HumaGear uprising with weapons to fight humans with.

By 2019, nearly all of humanity had been wiped out by HumaGears, with only a few small pockets of humans left alive scattered across the world. To exterminate the remaining humans, Will employed Horobi and Jin of MetsubouJinrai.NET to lead a military service dedicated to hunting down human resistance. As their last hope, a human resistance group in Japan led by former AIMS officers Isamu Fuwa and Yua Yaiba began construction on a successor satellite to the Ark, Satellite Zea, which would enable them to broadcast a transmission that could stop the HumaGear aggression.

Having not been affected by the alterations to the timeline, Aruto Hiden did not notice anything different until he arrived at Hiden and was greeted with hostility from the HumaGears working there. Will then appeared and revealed he was the new CEO of Hiden Intelligence, before transforming into Another Zero-One to take out Aruto. Aruto became Kamen Rider Zero-One Rising Hopper to fight Will, but found his power was drastically weakened before being beaten by the Another Rider. Another Zero-One then took the Zero-One Driver from Aruto, but Aruto was able to escape with the Rising Hopper key.

Discovering the location of the human resistance base in Japan where they were manufacturing Satellite Zeta, Will sent Horobi and Jin to lead a force of Trilobite Magia to attack the base. Will eventually showed up himself and became Another Zero-One to take the Rising Hopper key from Aruto, but before he could Soreo Hiden appeared and threw Aruto a ForceRiser so he could become Kamen Rider 001. Another Zero-One still managed to beat back the Rider, but before he could finish him off Sougo Tokiwa and his friends arrived and saved Aruto before traveling to 2007 to stop the Time Jackers from altering history.

Will later took Izu hostage and brought her to a meeting with Hiden's shareholders, intending to broadcast her execution on live television as a message to any who opposed HumaGear dominance. However, after returning to 2019, Aruto crashed the meeting to save Izu and attempted to retake Hiden from Will. While Aruto was able to sway some of the shareholders with an impassioned speech advocating equality between HumaGears and humans, the majority voted "no". Soreo Hiden then rose up and revealed himself as Hiden's majority shareholder, but also voted "no" as he did not yet see Aruto as worthy. However, with help from the human resistance, Aruto was able to rescue Izu before going off to fight Soreo. In the ensuing battle at the Hiden building, while Horobi and Jin held off Kamen Riders Geiz, Woz and Tsukuyomi, Will became Another Zero-One to battle AIMS Riders Vulcan and Valkyrie. With their combined powers, the two destroyed Will with a unified Rider Kick.

Later, Sougo and Aruto defeated Finis and reversed the alternate timeline she had created, restoring the timeline to normal. 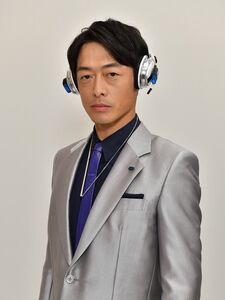 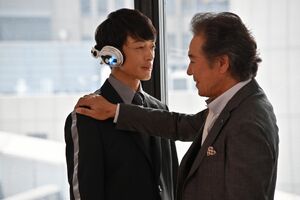 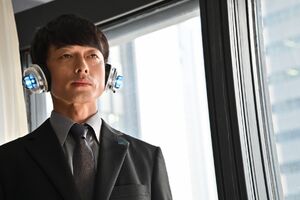 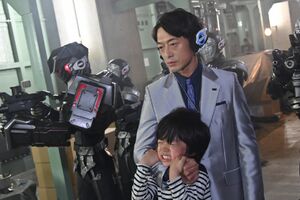 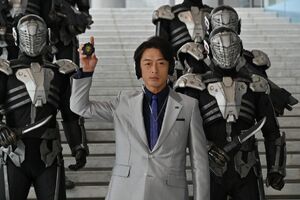 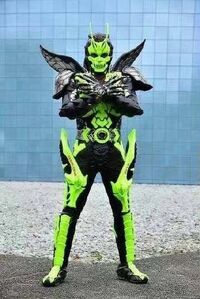 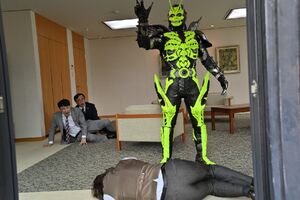 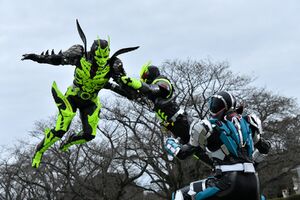 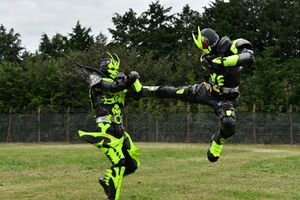 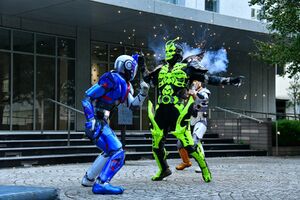