The Werewolf of Fever Swamp

Hunt humans and other animals in Fever Swamp (book).

He was portrayed by Michael Barry in the television series and John Bernecker in the 2015 film.

The Werewolf of Fever Swamp

Will Blake was a twelve-year-old boy living in Fever Swamp who, at some point prior to the events of the book, became cursed with lycanthropy. While in the form of a werewolf, Will terrorized Fever Swamp, preying on local animals. It's implied at one point that he killed a hunter he had been friends with. When the Tucker family moved into Fever Swamp, Will befriended their youngest son, Grady.

When a local girl, Cassie, claimed to Grady that a werewolf existed in Fever Swamp, Will was quick to deny its existence. After the Tucker family noticed dead animals turning up at the swamp, including several swamp deer, Grady's new pet dog Wolf was blamed for the killings, convincing Grady's father that he needed to be put down. However, Grady, unwilling to let Wolf be killed, set him free. Later on, at night, Grady ventures into the woods looking for Wolf, where he met Will. As the two boys searched for Wolf, Will transformed into a werewolf under the full moon, causing Grady to realize that he was the Werewolf of Fever Swamp. Will attacked and bit Grady, but Wolf returned and fought Will off, forcing him to flee.

Will vanished after the incident, leaving his fate uncertain though it's assumed Wolf killed him off. However, with the curse having been passed on to Grady, Grady became the new Werewolf of Fever Swamp, with Wolf as his companion.

In the episode of the TV show, not too much is changed about Will except that it's stated he killed the Swamp Hermit's wife and children at one point upon transforming. He is also shown to believe in werewolves and accuses the Hermit of being one, unlike in the book where he openly denies their existence. After transforming, he attacks Grady's mother and sister and later him. He is thought to be caught by the Swamp Hermit but it was actually a deer and Will manages to kill the Swamp Hermit and proceeds in attacking Grady. He is knocked by into the quick sand by Grady's dog and sinks- later in the episode, his skeleton resurfaces. It's unknown as to whether or not he bit Grady as in the book, given Grady howls at the moon, but doesn't transform, at the end of the episode.

In the Goosebumps film, Will Blake appears in an abandoned Supermarket going through the meat aisle until Champ accidentally alerts him by opening a soda. He searches for them throughout the Supermarket, Zach tries to throw him off, but fails. The werewolf chases them out the market into a parking lot, only to be slammed by Lorraine's car and sent flying into a dumpster. He reappears with the other monsters as Slappy leads them on an attack Madison High School to kill of R.L. Stine. He corners Taylor and is about to attack her, but Champ arrives and bites him with his "silver teeth filings" making the wolf run off.

The werewolf reappears with the monsters going after a bus Stine and the kids are using to escape only for it to be a decoy rigged to explode when the werewolf and the Abominable Snowman open the doors. He regenerates and lead Slappy to the Stine. Zach managed to finish the book just as the monsters reached them, and promptly opened it, causing a vortex to suck the werewolf and all the monsters in the book.

Will returns in this movie, as Slappy uses the "Karru Marri Odonna Loma Molonu Karrano" spell to bring a costume of Will to life. At the end, Will is sucked into the "Haunted Halloween" book, but Slappy's survival and him having written another magical book means his fate is left ambiguous. 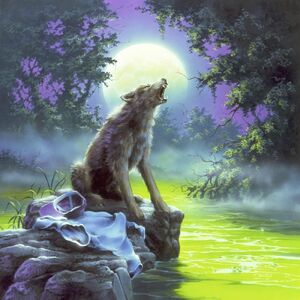 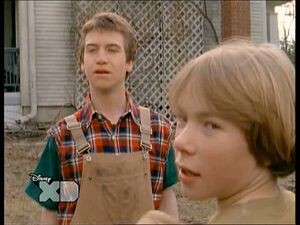 Will with Grady in the TV show. 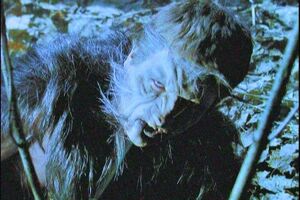 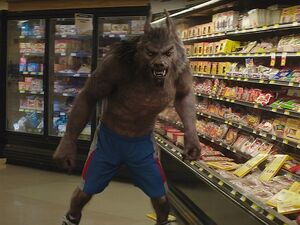 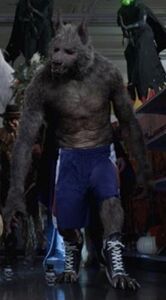 Will Blake as he appears in Goosebumps 2: Haunted Halloween.