Villains Wiki
Register
Don't have an account?
Sign In
Advertisement
in: Articles under construction, Mature, Call of Duty Villains,
and 12 more

He was voiced by Paul Reubens in motion capture, who is known for playing Pee-Wee Herman and Ivor in Minecraft: Story Mode.

Willard Wyler had made a deal with Mephistopheles for the ability to trap others in his own movies, so that they become victims to the monsters within the films. Two of the earliest victims under Willard's hands were the director-actor duo Kevin Smith and Jason Mewes, who were criticized by Willard for ruining the legacy of his films. They were trapped inside one of Willard's films, Rave in the Redwoods with Kevin being turned into a chainsaw-wielding Slasher, and Jason being his first victim. As time goes on, Willard would often send those who defy his will into his film, to let them be killed either by zombies or the Slasher.

When Winona fell in love with Matthew Mason, Matthew married her on the condition that he hyphenate his last name with Wyler's, so that his grandchildren can continue his legacy. Sometime after Winona and Matthew were married, Willard's film company started to go under. He refused to sell it to anyone else, so Winona decided to go her own way and start her own film company with Matthew.

When Winona told her father, he was furious, accusing her and Matthew of betraying him. He then transports the two into Rave in the Redwoods, where they are killed by the Slasher. He covered up their deaths by claiming that they died in an unrecovered plane crash off the coast of Bora Bora in one of his private jets. Willard still  hoping that someone would eventually be able to defeat Mephistopheles' influence, and release Willard from his state. Among them were David Hasselhoff, Kevin Smith, Pam Grier, and Cassandra "Elvira" Peterson, who Willard referred to collectively as "the original four". However, they all failed to work together, and were trapped in four separate movies: David Hasselhoff within Xombies in Spaceland, Kevin Smith in Rave in the Redwoods, Pam Grier in Shaolin Shuffle, and Elvira Petterson in Attack of the Radioactive Thing.

Eventually, all of whom he deemed worthy to save him from his prison. In the intro of Zombies in Spaceland, the four manage to ruin Willard's plan and manage to acquire one of the fragmented pieces of the Soul Key after defeating the Alien boss. Angered by this, Willard sends the four to obtain another piece of the Soul Key from within the movie, while defeating Kevin in his Slasher form at the same time. Willard continuously tries to challenge the four actors, sending them into Shaolin Shuffle and Attack of the Radioactive Thing respectively to defeat the Rat King and Krogzilla. They emerge triumphant in the end and acquire the respective Soul Key pieces from these movies as well.

He then sends them to The Beast From Beyond, where after an intense fight against an ancient race known as Cryptids, they come back to the Theater. As he congratulates the four for their efforts, he is so dragged off to the viewing room by Andre and A.J. As he tries to plea with the four, he is locked within the viewing room as Poindexter turns on Zombies in Spaceland. Willard tries to explain that countless souls are at stake, but he is ultimately sucked within the film.

Despite this however, he was able to escape the film and return to his theater directly after the four actors defeated Mephistopheles. While the actors are initially shocked at his return, he tells them that this was why he chose them, saying there is much work to be done. 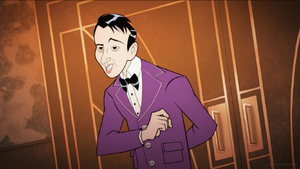 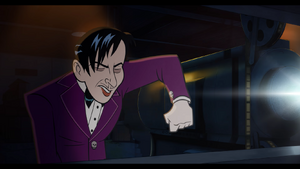 Wyler frustrated that the actors survived Zombies in Spaceland. 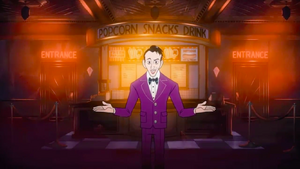 Wyler congratulates the actors for surviving the films. 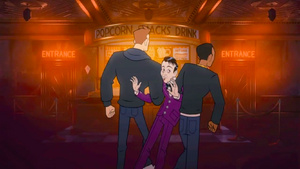 Wyler attempts to explain his actions as the actors drag him away. 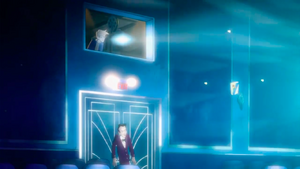 Wyler before being sent into Zombies in Spaceland by the actors. 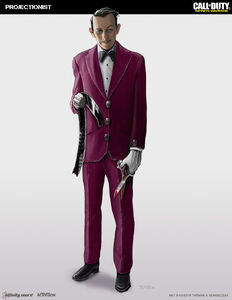