Villains Wiki
Register
Don't have an account?
Sign In
Advertisement
in: Doctors and Scientists, Right-Hand, Male,
and 22 more

Creating weapons to destroy the Ninja.

Willem Viceroy III is one of the secondary antagonists of Randy Cunningham: Ninth Grade Ninja. He is Hannibal McFist's assistant and a mad scientist. He is the one who makes the majority of the weapons and robots that McFist uses, and assists him in trying to destroy the Ninja.

Unlike McFist, Viceroy does not really care about money or power, he simply wants people to appreciate his genius, and sees making monsters and robots a way of demonstrating his skills.

He has a relatively friendly relationship with his boss, although he is sometimes exasperated by the McFist's incompetence and the fact he always steals Viceroy's ideas. It is Viceroy who comes up with majority of the plans, and the majority of the good ideas, but McFist always takes the credit.

Viceroy has a dry sense of humor, a quick wit and is quite sarcastic, particularly to McFist. Unlike McFist, Viceroy is much more light-hearted, and is more an Affable evil. He often argues with his boss, but they normally maintain a healthy working relationship.

Although normally the more serious, Viceroy does occasionally show a dimmer side to his personality, such as not revealed he had a mind reader, despite it being highly beneficial to there situation, and making the screen far to small for it to practice. Ironically despite Hannibal never noticing when he uses sarcasm to him, he never notices (or possibly ignores it) when Hannibal uses it to him. 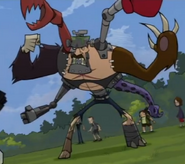