The Man
The Dreamwalker
Billy

Hunting down and killing androids through the park

Reach the center of the Maze so he can learn every secret about the Westworld park (failed).
Play in a Westworld where the hosts can fight back and humans can die (succeeded).
To be with Dolores (ongoing).

William, also known as the "Man in Black", is both a protagonist and a supporting antagonist in the first season of the HBO show Westworld. As a young man, he is portrayed by Jimmi Simpson, best known for portraying Liam McPoyle. As a senior citizen, he is portrayed by Ed Harris, who also portrayed General Hummel, Leonard Dekkom, Wilford, Christof and Mitch Wilkinson.

The Man in Black is the majority owner, member of the board, and visitor of the theme park Westworld, whose goals are to learn the deepest secrets of the park. He knows of a secret quest called the "maze", designed by Arnold and for the host Dolores, which is a discrete path to true consciousness, though he does not understand its significance. He has made it his life goal to unlock the knowledge of the maze.

In the first season finale, it is revealed that the Man in Black is the same person as William.

William first arrived in Westworld as a young, caring visitor. Immediately overwhelmed by Westworld, William, in contrast to Logan, wanted to see and enjoy everything Westworld has to offer. His then-selfless personality led him to save the life of the Host Dolores. He fell in love with her, and helped her escape from Logan twice. William also seems to care for the Hosts as persons while Logan just sees them as means to having fun.

However, after separating from Dolores Abernathy, William starts looking for her. During this time, William realizes that he likes being cruel and evil to the Hosts. He fully embraces this after Dolores, who has been reset, does not recognize him. As Logan notes in the first season finale, William's kindness was a facade that concealed his true nature as a manipulative and violence-obsessed psychopath.

As the Man in Black, he enjoys reveling in his own psychotic pleasures. He has no problem with gunning down entire villages of hosts and he even threatens to kill a fellow guest for talking to him about the real world. The Man in Black is also a nihilist who sees the real world as an "accident" that lacks any purpose or meaning. Enjoying Westworld for providing guests clear narratives, he embraces himself as a villain who is bored with the lack of danger for guests. 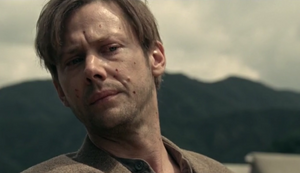 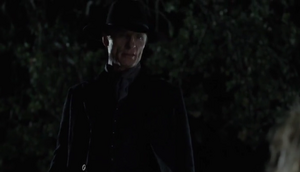 The Man in Black reveals himself to Dolores. 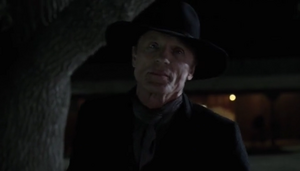 The Man in Black is annoyed by Teddy… 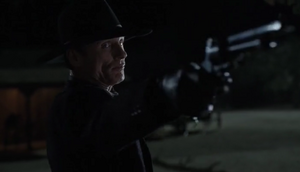 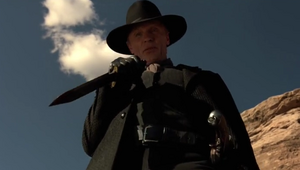 The Man in Black about to torture his captive. 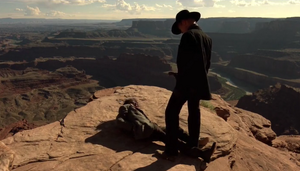 The Man in Black with a captured Host. 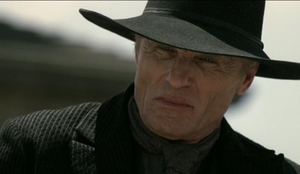 The Man in Black is about to murder a group of men. 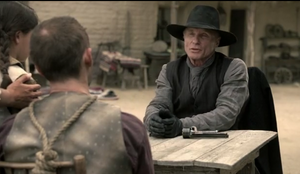 The Man in Black talks to Lawrence. 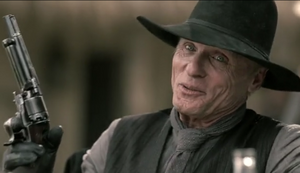 The Man in Black, moments before murdering the barman. 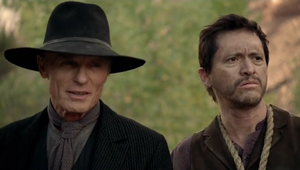 The Man in Black plans with Lawrence. 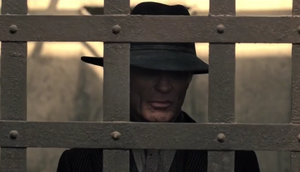 The Man in Black is imprisoned. 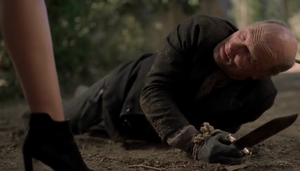 The Man in Black is approached by Charlotte Hale. 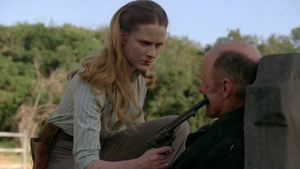 Dolores threatens William with her gun.

William listens to Ford's speech.
Add a photo to this gallery
Retrieved from "https://villains.fandom.com/wiki/William_(Westworld)?oldid=3007152"
Community content is available under CC-BY-SA unless otherwise noted.