Hanging around Freddy Fazbear's Pizza (even though it is closed).

Kill any witnesses to keep from getting caught (succeeded for a while).

William Afton is the main antagonist of the Five Nights at Freddy's novel trilogy. He is the archenemy of Charlotte "Charlie" Emily.

The co-owner of Freddy Fazbear's Pizza, William betrayed his best friend Henry Emily by murdering one of his children and later five others. 10 years later, William took the fake identity of Dave Miller and was hired as the night guard of the mall that was built over the long-closed pizzeria.

A confrontation with his old friend's daughter Charlie ended with his painful demise, but allowed him to become the undead Springtrap. His efforts at getting revenge and achieving immortality would then be aided by his twisted creations and his daughter respectively.

William Afton is an incredibly sadistic and extremely dangerous murderer, devoid of compassion and humanity. Most of his life outside of the franchise is unknown, but it's implied that he had a miserable existence, to the point that he felt that life owed him for his sadistic behavior.

He kills any witnesses to keep from getting caught, which shows his cowardly side. Nevertheless, he is still a determined and extremely fierce serial killer, who will not hesitate a single moment to get in a fight with any of his foes. He is also rather ungrateful, having killed Henry's daughter despite the fact that if it wasn't for him, then the franchise wouldn't have achieved its earlier success.

He sometimes appears as a compassionate man, but like many serial killers this is just a mere facade that he uses to manipulate others, especially children. After he realized that the child's souls are trapped into the cursed place, for a time, Afton actually believed to be good, while he was in fact trapping his victims' souls into the animatronics forever. In his delusional moments, he refers to his victims as his "family".

Afton was described as being overweight around the time that the serial killings occurred, but he eventually lost that weight while in his Dave Miller persona. The most notable trait concerning Afton, however, is the series of scars that could be found on the back of his neck and body. It was revealed that he had survived a previous spring locks incident, though he barely escaped with his life.

As Dave, William is stated to be tall, and his security guard uniform didn't seem to fit him. His skin was described as being sallow in appearance.

In the graphic novel, William is depicted as having medium-length brown hair and large grey eyes.

According to the novel, Afton originally owned Fredbear's Family Diner alongside Charlie's father, Henry, and took on the businesslike roles in the restaurant, while Henry was the creator of the main animatronics used. Being the mechanical geniuses that they were, William and Henry created the springlock suits, with William creating the Spring Bonnie suit, in which he would use in his killing sprees. On Halloween, 1982, Afton donned the Spring Bonnie suit, and he kidnapped and murdered Samuel, Charlotte's twin brother, when they were both toddlers.

While William was suspected of committing this murder, he wasn't charged; as a result, the diner ends up closing down, likely because of unpopularity. Henry and Afton established Freddy Fazbear's Pizza a few miles south of Hurricane, Utah, and once again, in 1985, Afton disguises himself as Spring Bonnie, lures five children to the backroom, murders them, and hides their bodies.

One of his notable victims was Michael Brooks, who later went on to possess the Golden Freddy costume. William is suspected of committing the murders and this time charged, but, considering that the bodies were never found, he was let go. Out of grief from both his daughter and the five children's deaths, Henry commits suicide, and the pizzeria is closed down, resulting in a mall being built over it. After this, Afton secretly changed his name to Dave Miller, and was hired as a security guard for the mall that was built over Freddy's.

Ten years later, a memorial was held by the parents of the late Michael Brooks, and Charlie and her childhood friends return to Utah to attend it. They meet with "Dave" while they were revisiting the pizzeria for the third time; they begrudgingly take him along, but Charlie notices a series of scars on the back of his neck.

Dave goes into the backroom, and he retrieves the Spring Bonnie suit, thus revealing that he was the killer all along, and he kidnaps Carlton, one of Charlie's friends, putting him in a spring lock suit. When the group of friends notices that Carlton was missing, they report it to the police department, but action wasn't immediately taken, due to Carlton's habit of being a troublemaker.

A police officer does go to the pizzeria to investigate, but he's immediately stabbed to death by Afton. Carlton wakes up to find himself in an old, malfunctioning springlock suit; William warns him about making any sudden movements, and he takes his shirt off, revealing more scars from a springlock incident.

Charlie and her friends return to the pizzeria to search for Carlton. William confirms that the animatronics were being possessed by the ghosts of the children, and that they were going to kill Charlie and her friends out of confusion. When told that they would also kill him, he expressed no concern, stating that as long as he had the Spring Bonnie suit on, he would be safe from the children's wrath.

As the group was about to leave the pizzeria, Afton grabs Charlie by the back of her neck, and threatens to choke her to death. Remembering how the spring lock suits operated, Charlie reaches into the neck of the suit and sets off the spring locks, piercing Afton and killing him slowly. The main animatronics - Freddy, Chica, Bonnie, and Foxy - appear, and they drag the dying Afton away.

He was found dead inside the Spring Bonnie Suit inside of a wall. Jessica and Charlie investigate his corpse inside the Pizzeria. He orchestrates the murders in order to locate Charlie and retrieve something from her.

Later in the book, the new wolf animatronic and Twisted Freddy surround Charlie, John, Jessica, and Clay Burke. Charlie starts asking the animatronics "What do you want from me?"

"They don't care about you. I'm the one that brought you here," A voice spoke from the same shadowed corner the wolf had emerged from. Both animatronics straightened up at the sound of the voice. Jessica says she recognizes the voice. Something started coming into view, it was the shape of a man, though its body contorted.

"You have something that belongs to me," the voice says, then the figure stepped into the light. Jessica gasped. "Impossible," Charlie whispered.

Springtrap stepped into the light. It was obvious he had been in a yellow rabbit suit, but its yellow color had went green. It was blood-soaked, along with mold.

"Dave?" Jessica whispered. "Don't call me that," he snarled, "I haven't been Dave in a long time." He held out his new hands; blood-soaked and forever sealed inside a rotting suit.

"William Afton, then? Of Afton Robotics?" Jessica asked. "Wrong again," he hissed, "I've accepted the new life that you gave me. You've made me one with my creation. My name is Springtrap!" The man who had once been Dave cried the name with hoarse glee, then scrunched his gnarled face back into a glare, "I'm more than Afton ever was, and far more than Henry."

Springtrap then boasts about him being able to control the animatronics. He moves closer to Charlie and she moves back. He starts gently stroking her cheek, saying he won't hurt her friends, but he needs something from her.

Clay Burke loaded a bullet into his gun and shot at Springtrap. The creature recoiled and everyone ran away.

Twisted Bonnie followed them. They expected him to not make it through a stream of water but he did easily.

Springtrap returns and boasts about how his animatronics were better than her father's creations. Clay realizes the water is also gasoline and lights it on fire. Springtrap runs away into a cave and Charlie follows. The others try to follow her but are quickly stopped by flames.

Springtrap surrounds Charlie as she walks through the cave, trying to find him. She hears his laughter echo.

Charlie finds some mushrooms and realized they are real, but it startled when Springtrap suddenly grabs her by her throat, crushing her windpipe.

She escapes and tries to run but Springtrap tackles her and tries again, but she rolls out of the way and her back hits a mushroom. She stands up and realizes the mushroom was stuck in the ground by a sharp point. She grabs it.

She looks back up to see Springtrap lunge at her. She dodges and shoves the spike into his chest. He stops and tries to fight her off as she digs it further into his chest.

She starts asking frantically "Why he took Sammy" and "Why did you choose him?" But Springtrap only answers with "I didn't choose him" and "I didn't take him. I took you."

Charlie loosens her grip on him. She realizes the cave is shaking. Clay, Jessica, and John now joined her. As she took her eyes off Spingtrap, he rolled into an open trap door in a rock, disappearing from view.

William did manage to leave the Springtrap suit, but was left weakened, using a wheelchair, and lost his hair and an eye. As well as this, he added a ton of grafted skin to keep him alive, and began using his real name. William's animatronic, along with Circus Baby, captured Jessica at Circus Baby's Pizza, and he explained his weakened state.

That when he was in the suit, he admitted to being on a power trip and tells Jessica. However, parts of the suit are still lodged in his body and it is VERY painful for him to move (Jessica obviously doesn't feel sorry for him). He has been capturing children for an experiment with a combination of all the original Freddy's animatronic's endoskeletons.

It is revealed all the murdered children's souls are still the combination of endosekeletons and are in pain. Once Afton injects a glowing liquid into Carlton (most likely remnant), Carlton Burke can talk to the souls of his friends who think William Afton is friendly and he explains that William Afton himself is the one who murdered them.

They then subsequently take hold of the animatronics once more and throw William into a furnace, where he finally dies and the souls of the children pass into the afterlife. It's later revealed that William Afton in the Spring Bonnie suit actually murdered Charlotte, rather than Sammy, in 1983.

William Afton, under the identity of "Dave Miller". 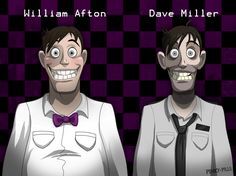 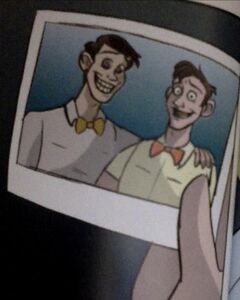 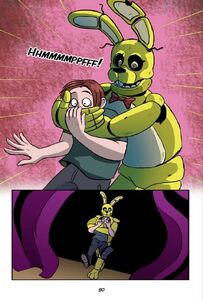 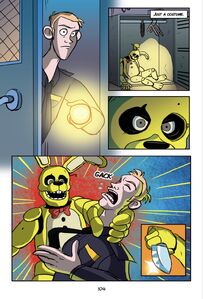 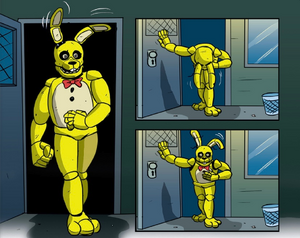 William bowing to the captive Carlton 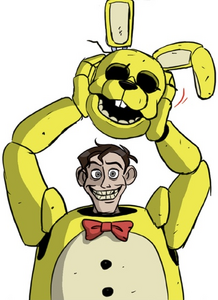 William in the Spring Bonnie suit, taking off the animatronic's head. 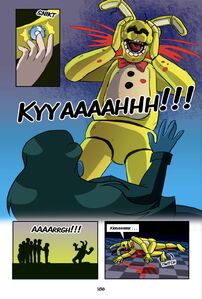 William's death in The Silver Eyes. 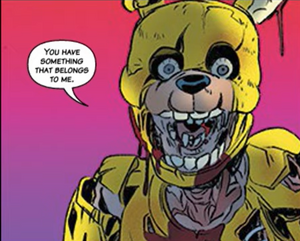 William Afton as Springtrap, as seen in the graphic novel of The Twisted Ones. 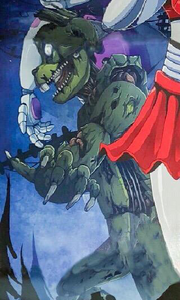 Springtrap on the poster for The Fourth Closet. 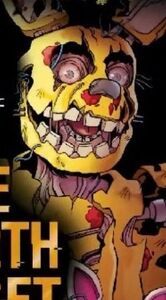 Springtrap on the cover for The Fourth Closet.