Get away with his murders (failed).
To gain immortality from harvesting the remnant from his victims. (presumably)

Purple Guy (real name William Afton) is the main antagonist of the Five Nights at Freddy's franchise. He was a man who dressed up as one of the mascots at Freddy Fazbear's Pizza (Spring Bonnie) and used his kid-friendly disguise to lure five children into the Safe Room, where there were no security cameras. It was confirmed that William was a former security guard of Freddy Fazbear's Pizza. He is the undead animatronic Springtrap and becomes the main antagonist of 3 and Freddy's Fazbear's Pizzeria Simulator. He is also the primary antagonist in the FNAF novel series.

He is voiced by PJ Haywood, who also voices Michael Afton.

An unknown man emerged in Freddy Fazbear's Pizza with plans for death and chaos for the company. One day, in Fredbear's Family Diner, as Fredbear was serving cake to the children, a girl was crying outside because she was locked out of the restaurant by three other children. As she cried, William drove over in a purple car and murdered the girl.

Fredbear was unable to protect the child. With that, Purple Guy drove away, leaving the child's corpse outside. The girl's spirit, possibly driven by revenge, and a desire to help William's other victims, was theorized to have possessed an animatronic a certain time after that, known as The Puppet. Fredbear's Family Diner was then shut down.

Later, in 1983, Fazbear's Entertainment opens Freddy Fazbear's Pizza, introducing Freddy Fazbear, Bonnie, Chica, and Foxy as the new mascots. These new animatronics were added alongside the original Fredbear and Spring Bonnie characters, which were made as springlock suits that doubled as both animatronics and costumes that a person could wear. William returned to the restaurant and wore the Spring Bonnie suit to lure five children, one by one, into the establishment's Safe Room before murdering them. Afterward, The Puppet, possessed by William's first victim, stuffed the corpses of the five children into the Freddy, Bonnie, Chica, Foxy, and Golden Freddy animatronics, allowing their spirits to possess them.

In Five Nights at Freddy's 2, William can be seen in the Foxy Go! Go! Go! Minigame.

On the third playthrough, William, who killed the crying child in the Take Cake to the Children minigame, is seen standing in the corner of the starting room, smiling. When Foxy approaches the children, they seem lifeless. The minigame ends with Withered Foxy's jumpscare.

He also appears in the S-A-V-E-T-H-E-M minigame on rare occasions, where he attacks Freddy and crashes the game by saying "You can't," which is in response to the various messages about saving the children.

William Afton then returns to Freddy Fazbear's Pizza to dismantle the animatronics. After Night 1, the player can have the ability to play as 8-bit Freddy, and Shadow Freddy appears and says "Follow me." After you follow it to a secret room, it will say "ERROR" at the left-hand corner of the screen, followed by a static noise, and Purple Guy can be seen taking Freddy apart.

He then continues to do the same to the other animatronics as each night goes on. After Night 5, the player has the ability to play as the ghost of one of the murdered children. The player then has to walk to the Safe Room, which they have the ability to enter. William can be seen scared, with 4 of his victims blocking the exit. The player has to chase him around, and William will then immediately run into the empty Spring Bonnie suit. He then laughs at his victims, thinking he is safe, until the suit's spring-locks malfunction. As a result, the numerous mechanical parts lining the inside of the suit crush and puncture William's body. William eventually dies from serious injury and blood loss, only for his spirit to reanimate the Spring Bonnie suit. William Afton then becomes Springtrap.

30 years later, the managers of the pizzeria figured out that the animatronics were severely broken. They decide to close the pizzeria forever, and they then made a horror attraction called "Fazbear's Fright" in an amusement park. They put William (now known as Springtrap) inside this attraction. William, as Springtrap, noticed that he had no escape and attempted to kill the player for five nights. After Night 6, the attraction burns down. In Sister Location's Custom Night ending on Very Hard Golden Freddy mode, it is revealed that Springtrap has survived.

William Afton only appears in the Fazbear location shown in the minigames, at the end of Night 3. In the following game, 'Sister Location,' it is implied that William is the father of the minigame protagonist of FNAF 4, the Crying Child.

In the opening scene of Sister Location, an entrepreneur is interviewing William about the Circus Baby's Pizza World animatronics. They inquire why certain features were added and express their concerns, but he avoids answering their questions regarding these specific features, which he had actually designed to make it easier for him to kidnap and murder children under the guise of kid-friendly entertainers.

William is also the CEO of Afton Robotics, the creator of the Circus Baby animatronics, the former owner of Circus Baby's Entertainment and Rental, and, by extension, Circus Baby's Pizza World. It's revealed that during Circus Baby's Pizza World's opening, William instructed his daughter, Elizabeth, to not go near Baby, due to her being programmed to kill children when they are alone. But Elizabeth does find herself alone with Baby, who lures her close with ice cream. Once she is within reach, Baby drops the ice cream and grabs William's daughter with a robotic claw, pulling the girl into her chest cavity and killing her.

It is revealed in the Custom Night's final cutscene that William sent his son, Michael, to his rundown factory to find his daughter. This ends up getting his son killed by his daughter Elizabeth, who is now possessing Circus Baby. After Ennard vacates Michael's body, he repossesses his own corpse, which has decomposed into a purple colour. At the end of the cutscene, Michael vows to find his father and possibly kill him to get revenge for all the murders. In the end, it's shown that William, as Springtrap, survived the destruction of Fazbear's Fright.

William Afton returns in the sixth and final installment as Springtrap once more, as one of the two main antagonists of the game, alongside his daughter, Elizabeth, who possesses Scrap Baby. He makes his first appearance as Springtrap, after Tuesday's night is complete, during his salvaging phase. Like the other hostile animatronics, the player can choose whether to throw him back into the alley outside the pizzeria or to salvage him. If the player chooses to throw him back into the alley, he will be absent for the rest of the game. If the player chooses to salvage him, they will have to observe him while listening to five audio prompts. Springtrap, like the other animatronics, will move when the player's view is obstructed by the maintenance checklist. If the player fails, Springtrap will jumpscare the player and taunt them. If the player succeeds, William will disdainfully remark that the player deceived and lured him to their establishment.

Regardless of the outcome, the player will have to defend themselves from Springtrap onwards. After Saturday’s night shift is complete, Elizabeth, possessing Baby, speaks to the player about how she and her father manipulated the player into inadvertently granting them children to kill, and souls to collect, before declaring that she will make her father proud. Her speech is then interrupted by the player’s supervisor, known in-game as the Cassette Man (heavily implied to be William‘s former business partner, Henry). He sets the building on fire, and then informs the animatronics that they have all been lured to the player’s establishment, as a trap set for them, in order to force the spirits possessing them to pass on to the afterlife. The Cassette Man specifically addresses William, telling him that he will be sent to Hell for his murders, before speaking to Lefty, who was designed to contain The Puppet inside his suit. He reveals that The Puppet is possessed by his daughter, who was William‘s first known victim. He apologizes to his daughter for not being there at the time of her death to save her, before declaring that it’s time for all of the tragedies surrounding Fazbear Entertainment to be put to rest.

In this game non-canonical to the main series, it is heavily speculated that Afton is the one being made to fight off several of the animatronics as part of his personal hell for every deplorable action he committed throughout his life. Some evidence pointing to this conclusion comes from lines the animatronics give towards the player one, in particular, being from withered Chica who is revealed to have been Afton's first victim from the previous game. In the Puppet's taunting lines, it states that it used to fear him, but is now in a position where it can exert judgment on the player for eternity. Many also believe that a word-bite heard in the game is, in fact, Afton declaring his eternal hatred for his son and his former business partner whilst burning in Hell much like how the Cassette Man foretold in Pizzeria Simulator.

In the spin-off game, Afton appears in his original form and Springtrap forms.

William Afton appears in the novel trilogy as the main antagonist including his Springtrap persona.

William Afton's background is mostly told via silent actions within retro-graphics, or by reading between the lines throughout the games. Between his minigame presence and piecing together information gleaned from the phone calls as well as the posters in Five Nights at Freddy's, the community has been able to piece together some information about William. He seems to be malevolent, sadistic, and cruel, ominously smiling as he kills children. He is also increasingly psychopathic and demented, as he is able to hide his true nature under a mask of politeness, judging from the intro of Sister Location, and also psychologically manipulates his son, Michael, by presumably using his guilt over unintentionally causing his younger brother's death in 1983 (if Michael is the older brother), in order to force Michael to obey his every order. Despite his sadistic and dangerous tendencies, he is shown to genuinely love and care for his daughter, Elizabeth, and does express grief over her death, though Freddy Fazbear's Pizzeria Simulator implies that he is responsible for influencing Elizabeth's bloodlust and sinister behavior, and may have even wanted her to continue his murderous legacy, and carry on his experiments for him.

William Afton's motives for his actions as of Sister Location remain unknown. He is seen dismantling the animatronics at Freddy Fazbear's Pizza twice, which appears to be linked to the spirits within the animatronics being released.

William in one of the minigames.

William scared.
Add a photo to this gallery 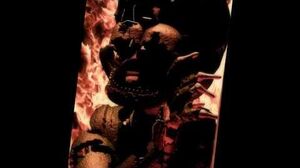 Retrieved from "https://villains.fandom.com/wiki/William_Afton_(Five_Nights_at_Freddy%27s)?oldid=2807812"
Community content is available under CC-BY-SA unless otherwise noted.