Hunting down people that escaped his camp.

Murdering people and then steal their supplies.
Antagonizing Kenny and Clementine.
Antagonizing and intimidating the cabin survivors.
Making fierce speeches.
Ordering his minions around.

Get his group and his unborn baby back (succeeded).

Corrupt Clementine into becoming a more ruthless survivor (either succeeded or failed).
Stop Clementine and her group from escaping his community (failed).

He is described as the intelligent and ruthless leader of a community of survivors and is greatly feared by the cabin survivors, all of whom were once a part of his group before leaving to escape him.

He was voiced by Michael Madsen, who also played Victor Vega in Reservoir Dogs, James Alexander in L.A.P.D.: To Protect and to Serve, Toni Cipriani in Grand Theft Auto III, Budd in Kill Bill, Maugrim in The Chronicles of Narnia: The Lion, the Witch and the Wardrobe, Michael O'Leary in Call of Duty: Black Ops II and Grouch Douglas in The Hateful Eight.

With a very obscure backstory, Carver built up a large community during the zombie apocalypse at an abandoned Howe's Hardware, having dozens of people under his command. One of these people was Rebecca, a person whom he apparently had an affair with and got her pregnant. Rebecca later escaped Carver's camp with a small group of other escapees because of Carver´s brutality and he began searching for them.

Carver first appears as a man under the name George, who broke into the cabin the escaped group of survivors resided as. As the only people there were Clementine, a recent joiner, and Sarah (unbeknownst to Carver), he quickly left after inspecting the house.

When the group returns, Clementine reports "George's" visit and they quickly move out. After moving into another house with Kenny, Clementine's old friend, Sarita, and Walter, Carver and his group quickly tracks them down. Ultimately, all members are captured (except Luke, who went missing) and Walter is coldly gunned down by Carver before they are all escorted out back to Howe's Hardware.

When they return, Carver locks the group up with the other prisoners and forces them to work to try and earn their way back into his community. He kills a member he sees as weak and brutally beats Kenny after discovering their escape attempt. When Bonnie opens the gate to set them free, Carver holds them all at gunpoint saying he would rather shoot Rebecca then let them leave again.

Clementine drops down on Carver allowing Kenny and Luke to disarm him while the group debates what to do with him. Kenny shoots him in the legs and grabs a crowbar in preparation to beat him to death. Everyone except Rebecca and possibly Clementine leave so they don't have to watch. Kenny bashes his face in, killing him and completely obliterating his face. After he is dead, Rebecca take his gun of him and they all leave to join the others.

In the third season, Carver can be mentioned by Kenny, that what he did to him was for Clementine. Or, if Jane were saved by Clem in the final of the second season, his corpse can be seen in a pile a bodies.

It has been hinted by characters like Bonnie and Jane before the events of the second season that Carver was once a kind, caring, lenient, empathetic and charming leader, but due to unknown reasons Carver lost his effective empathy and became the psychopathic madman he is in season two. Carver was shown to be very intelligent, knowledgeable, acquainted, cognizant, mindful, and aware of his surroundings by easily figuring out that Clementine was allied with the cabin group that he was hunting down.

Carver is incredibly sadistic, cruel, odious, and short-tempered and shows little to no remorse for the people he killed or hurt since he viewed them as "weak" or traitors that needed to be punished for their crimes against his community. At the same time, Carver and his subordinates are completely delusional and pretentious of the fact that they are evil people, they kill innocent people that are deemed weak or a threat by Carver, imprison those they try to leave or don't follow Carver's rules, and abuse and attack people when they make a mistake or talk out of term. Carver even struck Clementine across the face and forced Carlos to hit his own daughter and murdered Reggie without remorse. As well as that, Carver slowly becomes more and more arrogant and aggressive, culminating in him in tauntingly goading Kenny while the latter beating him to death with the crowbar.

Carver had a deep obsession for his unborn child (Alvin Jr.), even though the child is more than likely not his. Carver wanted his child to be raised to be strong and ruthless just like himself, so once Carver dies his child can take over his community, carrying on his legacy. 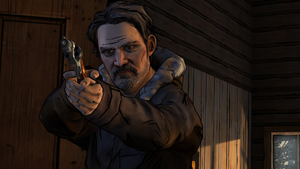 Carver holding a gun as he surveys the cabin. 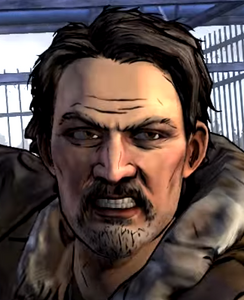 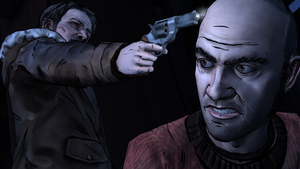 Carver shooting Walter in the head. 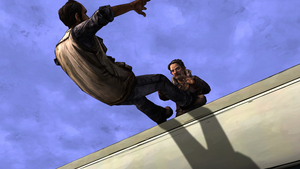 Carver pushing Reggie to his death. 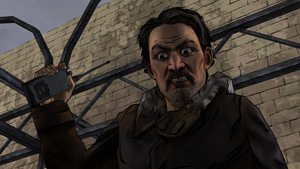 Carver glaring at Kenny before brutally beating him with a radio and thus taking his eye.

Carver brutally beaten to death with a crowbar by Kenny.