Brother
First Werewolf
Alpha Werewolf
The Father of all Werewolves

The first Werewolf
Member of the Corvinus Family

Kill anything in sight (succeeded until his capture and later death)

William Corvinus is one of the two main antagonists of the film Underworld: Evolution.

He was portrayed by Brian Steele.

He is a very powerful Werewolf who is capable of slashing violently with his sharp claws and also biting anywhere with his sharp teeth. He also seems to have high endurance, as Selene's guns and shurikens had little effect on him.

William was born sometime in the 5th century AD, the son of Alexander Corvinus, the First True Immortal, and his mortal wife, Helena, and is the twin brother of Marcus Corvinus, and an unnamed brother. Along with Marcus, William inherited the Corvinus Strain in its active state from their father, meaning that they were born Immortal.

It was William who was bitten first; the brothers were in the Carpathian Mountains when a large black wolf lunged out of the shadows and attacked them: The wolf first attacked Marcus, who was unable to defend himself due to his panicking horse. William jumped in front of it and was able to kill the wolf with his sword, but not before it bit his wrist through his chainmail in its death throes.

Marcus took his twin to a nearby inn to have his wounds seen to, but as the night wore on, William became seriously ill, developing a high fever, and convulsions racked his body: The Corvinus Strain present in William's body reacted in an immune response with the Rabies virus and the wolf's DNA deposited by the wolf's bite, causing it to mutate, changing William's entire physical composition: William began to sprout hair all over his body, and his face changed to reveal a more wolf-like appearance. Before the night was through, William had become the first Werewolf.

Unlike the later generations of Lycans, William was incapable of transforming back to human form. His lycanthropy virus was much more infectious than his brother's Vampire virus, even allowing his victims to transform post-mortem. Before being bitten, Marcus and William shared a bond that their father never truly saw, one so strong that even after his transformation, Marcus was the only one that William would not harm. Despite Marcus's and Alexander's efforts, William's rage could be uncontrolled and he roamed the countryside, killing everything in sight. His lycanthropy virus spread across the land, turning hundreds of humans into powerful Werewolves.

William Corvinus is first seen being attacked and captured by Viktor and his vampires. Viktor chose to imprison William rather than kill him because he feared that if William was killed then every Werewolf would be killed as well. This was actually a lie told by Marcus to save William and himself.

Years later, William was finally freed by Marcus, who was searching for him. He tries to attack Marcus but when he recognizes him, he stops and remains calm, due to their bond being very strong. They are both interrupted by the arrival of Selene and recruits of Alexander.

William proved to be a powerful fighter, as he easily killed the recruits in less than minutes. First Selene fights William but her guns and shuriken's do not do much damage to him. Selene's lover, Michael Corvin, then fights William. Michael proved to be a stronger fighter as he breaks William's head, killing him. 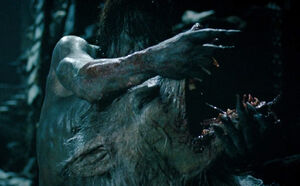 William moments before his death.
Add a photo to this gallery

Retrieved from "https://villains.fandom.com/wiki/William_Corvinus?oldid=3892740"
Community content is available under CC-BY-SA unless otherwise noted.