Have Rowf and Snitter killed in order to prevent A.R.S.E. from being shut down (failed).

William Harbottle, also called Hot Bottle Bill, is one of the three main antagonists (alongside Dr. Boycott and Digby Driver) of Richard Adams' 1977 novel The Plague Dogs, and its 1982 animated film adaptation of the same name. He is the Secretary of State of the Department of the Environment who was responsible for having A.R.S.E. established in Lawson Park. After two dogs named Rowf and Snitter escape from the research station, Harbottle devises a plan to have them killed, so the research station wouldn't be disclosed by the media.

He was voiced by the late William Lucas in the film.

William Harbottle is an egotistical, greedy, cruel, unscrupulous, and self-serving politician who only cares about money. He made reasons to kill Rowf and Snitter because he didn't want the public to find out about the two dogs being test animals and to prevent the research station from being disclosed by the media. Despite knowing that the dogs couldn't have gotten infected by the bubonic plague, he and his civil servants went on to announce that they may have gotten it, even though Dr. Boycott said it was impossible. This is because Harbottle only wanted to protect his political career, as the media discrediting the lab would embarrass the Secretary of State.

According to Major Awdry, he saw the army's operation to kill the dogs primarily as a publicity stunt for his own benefit and the army's search for the two dogs also led to more disaster for the local farmers. When he and his senior civil servant, the Under Secretary arrive at the Drigg Nature Reserve to have the dogs shot after they were rescued from sea, he was told by Major Awdry that Alan Wood was their lawful owner.

Despite this advice, he still ordered Awdry to shoot the dogs and refused to leave when he was told by Major Rose that it's illegal to kill animals in his reserve until Digby Driver threatened to give him a bad reputation. After his authority has been challenged, he orders the Under Secretary to deal with the problem. When Rowf chases him away, Harbottle looks out in shock and panic, realizing that his plans to eliminate the dogs have failed and that his political career will be jeopardized.

After a political battle at Lawson Park, a research station called Animal Research: Scientific and Experimental had been approved and established by Harbottle as a mean of making public money through medical research. At the research station, Dr. Boycott and other scientists began to perform thousands of torturous experiments on animals.

Five years later, two dogs named Rowf and Snitter escape the laboratory and roam the countryside of the Lake District in search of a master until they are forced to kill livestock in order to survive in the wild with the help of a fox known as "the Tod". After a Jewish businessman named David Ephraim (Pierce Chetwind in the film) was accidentally killed by Snitter via a gunshot to the face, the Department of the Environment sends Digby Driver to investigate.

When the Dawsons capture Snitter, they call the police and Stephen Powell heads out to retrieve him. However, the Tod comes and helps Snitter escape before the police could catch him. Digby Driver comes by and takes Powell back to the research station as he discusses about Dr. Goodner's defence work on bubonic plague. Driver later blackmails Goodner and he publishes a headline about Rowf and Snitter carrying the plague, causing mass hysteria in the public.

When Geoffrey Westcott (Ackland in the film) tries to kill the dogs for raiding his groceries, he heads to the Dow Crag and only manages to shoot off Rowf's collar as he falls to his death. His corpse is devoured by the two starving dogs and his body was later found by the authorities. The next day, Hot Bottle Bill and his civil servants meet at the House of Commons during a parliamentary debate. Harbottle informs his subordinates about Westcott's death and announces that he deployed the 3rd Battalion of the Parachute Regiment to exterminate the two dogs.

The next day, while the army is searching for the dogs, they learn that the dogs are headed to Ravenglass on a train and a reporter named William Williamson interviews with Major John Awdry about his thoughts about the dogs. Harbottle arrives in his limousine and Mr. Williamson chats with him as he wishes him good hunting to kill the two dogs. Major Awdry and his army then head over to Ravenglass to locate the dogs. Rowf and Snitter arrive at the Irish Sea and the army corners them. Snitter claims to see an island across the sea and heads out to sea with Rowf following him. Meanwhile, Digby Driver redeems himself and helps Alan Wood locate the dogs when they arrive at the Drigg Nature Reserve.

The two dogs are rescued by two naturalists named Peter Scott and Ronald Lockley and they arrive at the nature reserve as the dogs are reunited with Wood. Harbottle and the Under Secretary arrive in their limousine and they greet Wood. Harbottle requests Major Awdry to shoot the dogs, but Awdry informs him that Wood is their lawful owner. Although Harbottle is surprised to hear the news, he insists on having the dogs shot and Major Awdry is reluctant to do so. However, the warden of the nature reserve, Major Jim Rose informs Harbottle that it's illegal to kill animals in his reserve and orders him to leave. Harbottle refuses to leave until Digby Driver threatens to give him a bad reputation if he kills the dogs. Harbottle retreats and orders the Under Secretary to deal with the problem. However, Rowf chases him away and they drive off as Driver takes pictures of Harbottle in his panicked state. Driver states that he will make Harbottle an embarrassment and humiliate him even more than Boycott, implying that Harbottle's project will be shut down. 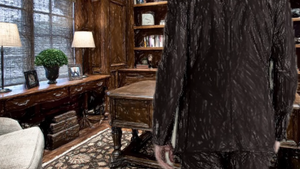 William Harbottle at his office. 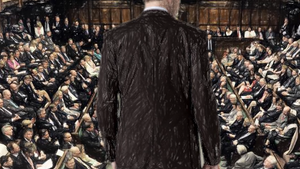 Harbottle at the House of Commons during a parliamentary debate. 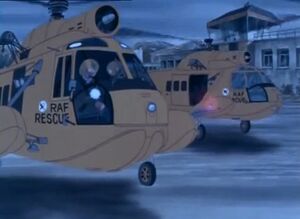 Harbottle deploys the 3rd Battalion of the Parachute Regiment to hunt down Rowf and Snitter.