The Soul Mates (alongside Steven Baleman)

Rape, torture, and murder as many young women as possible

William Harris is one of the two main antagonists of the Criminal Minds episode "Soul Mates". He is a charismatic serial killer and rapist who preys on young women and teenage girls along with his partner-in-crime, Steven Baleman.

He was portrayed by Michael Boatman.

Harris was born in 1965 and grew up in Columbus, Ohio, before moving to Atlanta, Georgia. He works as a lawyer, and he and his wife Sharon have a teenage daughter, Andrea.

A year before the events occurring in the episode, Harris was arrested and charged with the kidnapping and rape of a teenage girl. The charges were dropped after the victim refused to testify against Harris, but his reputation in the community was damaged beyond repair, so he moved with his family to Sarasota, Florida.

Soon afterward, Harris and his family went to a neighborhood block party, where Harris met Steven Baleman. Through careful suggestion and innuendo, the two realized that they shared the same taste for rape and murder. They would soon begin killing together, communicating through a secure website in which they planned their crimes and shared their twisted fantasies. By the time of the episode, they have killed three young women and one teenage girl. Their modus operandi is to torture and rape their victim for 48 hours before finally killing them and dumping the body in a secluded area.

Harris is arrested for the murder of his and Baleman's latest victim, Missy DeWald. The FBI's Behavioral Analysis Unit (BAU) team is awaiting the officers when they arrive at the local police station.

At the police station, BAU Special Supervisory Agent David Rossi explains that Harris matches the profile of the killer, a successful family man who lives and works in the area. The BAU team digs through all areas of his life while Rossi and Derek Morgan handle the interrogation, reasoning that, as long as they hold Harris, his partner won't be able to kill DeWald. BAU agent Spencer Reid and technical analyst Penelope Garcia look through Harris' computer, with Garcia noting that he has covered his tracks well.

Garcia eventually finds blog entries sent to and from another individual, and Reid realizes the collaboration may be between a killing team; he observes that the two people communicating are obsessed with each other, and that their messages have overtones of violence and sadism. Rossi tells Harris that they have found the messages and demands to know where DeWald is, but Harris refuses to tell them, saying that the longer they question him, the longer the real killer has to hurt her. When DeWald's body is found, Harris smirks, saying, "I told you so." When the medical examiner finds that DeWald had died several hours before her body was found, the BAU realizes that Harris' partner must have killed her.

In order to provoke Harris' partner into acting on his own, the BAU team releases a statement that Harris is cooperating with them; sure enough, Baleman, feeling betrayed, kidnaps Andrea. Upon learning what has happened, Harris is unsure what to do, as telling the BAU he knows where Baleman is would give away his own guilt. Morgan tells Harris to act like a father and, in a rare moment of conscience, Harris agrees to help them catch Baleman.

Harris wears a wire tap and leads the BAU team to his and Baleman's hiding place, where a terrified Andrea is bound and gagged. Harris frees Andrea and tries to convince her that h is innocent, but when Baleman shows up, he berates him for targeting his daughter and says that he never gave him up, thus revealing their guilt. The BAU team, flanked by local police, swarm in and arrest both of them. As Harris is led away from his shattered wife and daughter, Rossi remarks that Harris didn't help catch Baleman for them, but just so he could see his partner one last time. 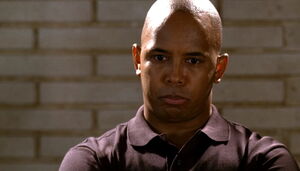 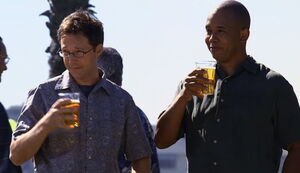