William Munny is the protagonist and anti-villain of the 1992 Western film Unforgiven.

He was portrayed by Clint Eastwood.

Miles away in Kansas, the Schofield Kid, a boastful young man, visits the pig farm of William Munny, seeking to recruit him to kill the cowboys. In his youth, Munny was a bandit who was notorious as a cold-blooded murderer. Now a repentant widower raising two children, he has sworn off alcohol and killing. Though Munny initially refuses to help with the execution, his farm is failing, putting his children's future in jeopardy. Munny reconsiders a few days later and sets off to catch up with the Kid. On his way, Munny recruits Ned Logan, another retired gunfighter, who reluctantly leaves his wife to go along.

Back in Wyoming, gunfighter English Bob and his biographer, W. W. Beauchamp, arrive in Big Whiskey, also seeking the reward. Little Bill and his deputies disarm Bob, and Bill beats him savagely, hoping to discourage other would-be killers. The next morning he ejects Bob from town, but Beauchamp decides to stay and write about Bill. He has impressed the biographer with his tales of old gunfights and seeming knowledge of the inner workings of a gunfighter's psyche.

Munny, Logan and the Kid arrive later during a rainstorm; they go to the saloon/whorehouse to discover the cowboys' location. With a bad fever after riding in the rain, Munny is sitting alone in the saloon when Little Bill and his deputies arrive to confront him. With no idea of Munny's past, Little Bill beats him and kicks him out of the saloon after finding a pistol on him. Logan and the Kid, upstairs getting "advances" on their payment from the prostitutes, escape out a back window. The three regroup at a barn outside of town, where they nurse Munny back to health.

3 days later, they ambush a group of cowboys and kill Bunting. Logan and Munny no longer have much stomach for murder. Logan decides to return home while Munny and the Kid head to the cowboys' ranch, where the Kid ambushes Quick Mike in an outhouse and kills him. After they escape, a distraught Kid confesses he had never killed anyone before. He renounces life as a gunfighter.

When Little Sue meets the two men to give them the reward, they learn that Logan was captured by Little Bill's men and tortured to death. He revealed the names of his two accomplices. The Kid heads back to Kansas to deliver the reward money to Munny and Logan's families. Munny drinks half a bottle of whisky and heads into town to take revenge on Bill.

That night, Logan's corpse is displayed in a coffin outside the saloon. Inside, Little Bill has assembled a posse to pursue Munny and the Kid. Munny walks in alone and kills Skinny Dubois, the saloon owner and pimp. After some tense dialogue, a gunfight ensues, leaving Bill wounded and several of his deputies dead. Munny orders everyone out before stopping Little Bill from reaching for his pistol. Bill curses Munny before the latter finishes him with a final gunshot. Munny threatens the townsfolk before finally leaving town, warning that he will return if Logan is not buried properly or if any prostitutes are further harmed.

A brief epilogue states that Munny was rumored to have moved to San Francisco, where he prospered in dry goods.

Although in his youth he killed dozens of men, once he found his wife he became more caring especially when he had children, he also showed remorse about his actions and admitted he was a bad man and became a better man. 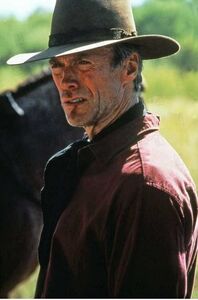 Add a photo to this gallery
Retrieved from "https://villains.fandom.com/wiki/William_Munny?oldid=3367702"
Community content is available under CC-BY-SA unless otherwise noted.