Help Soviet Union to win the war (both failed).
Stop Aleksandra Valentina from brining Vogel's army from the Dark Aether (succeeded).
Bring "Kazimir Zykov" from the Dark Aether.
Capture and weaponize the Forsaken.
Kill the Requiem strike team (all failed).

Doctor William Peck is a major antagonist of the Zombies mode in the 2020 first person shooter, Call of Duty: Black Ops Cold War. He was the lead scientist of the Omega Group, serving under Colonel Lev Kravchenko in obtaining research from the Dark Aether.

He was voiced by Zeke Alton.

Peck was born in 1940, and graduated with a Doctorate in Theoretical Physics at the age of 20. Later he became the Program Manager in the US Department of Defense, and in charge of the Directed Energy Weapon laboratories. According to Peck under the truth serum in "Firebase Z", he was romantically involved with a woman named Martha, whom he remembered fondly.

He was deemed an excellent gain for Soviet Union by Aleksandra Valentina, which resulted with Peck defected to Omega Group, a organization which it's goal of harness the energies and resources of the Dark Aether to win the Cold War. Working under Soviet Colonel Lev Kravchenko, Dr. Peck would work with Dr. Valentina on trying to help the Soviet Union gain more power against the United States.

Peck appears as a spectral vision in "Die Maschine", as the Requiem strike team see the vision of him speaking with Valentina when going into the Dark Aether.

In 1984, Samantha Maxis was captured by Peck during her infiltration to Outpost 25, one of Omega's bases. Grigori Weaver, an associate of Maxis and the commanding officer of Requiem, led an operation to rescue Maxis and recover intel. Upon entering Outpost 25, the strike team was met by Captain Sergei Ravenov, a agent of Omega and the secret contact of Maxis, who told them to enter the teleporter to the base.

Upon entering the base, Peck requests strike team to restore the Aether reactors in exchange for Maxis. However, upon finishing the task, Weaver and the team were informed that Peck threw Maxis into the Dark Aether, and need to open it themselves. Ravenov told the team that when Omega sent one of the agents to Dark Aether, they all went insane and telling unreal things, so in order to extract the truth, Omega made a truth serum to change their sayings. Ravenov gave a keycard to the team to collect all the materials for the serum, and to make Peck says how to rescue Maxis.

Once Peck inhaled the fumes of the serum, he tells the team that they need the codes to restart the quantum mainframe, and to locate Maxis, they need her dimensional tracker ID tag. Peck then reveals that he tricked Requiem into stopping Maxis one way of getting out of the Aether, but Weaver and the team use the satellites to bring her back. One of the Elder Gods Orda managed to escape from the Aether, but is defeated by Requiem, who escapes before Omega can make it the outpost. Aleksandra Valentina leads the Omega team to rescue Peck, but Kravchenko reveals himself to the doctor, informing him that he is disappointed that he failed to stop Reqiuem. Peck is then asked by Kravchenko which of his eyes is better, implying that Lev is going to gouge out one of his eyes.

In Mauer der Toten, Peck is part of the communications team in helping Requiem stop Valentina, who had revealed herself to be serving the Forsaken and planning on brining her father's army from the Dark Aether. He would advise the team to create an inversion warhead, which would take Valentina's essence to destroy the portal to prevent the Forsaken from entering their world. Following Valentina's defeat, Peck attempted to convince Kravchenko that the Forsaken could be captured instead of being eliminated. He saw a possible advantage in capturing the Forsaken so it could be weaponized, but he was being manipulated by the entity itself under the name "Kazimir Zykov". Once Kravchenko was convinced to capture the Forsaken, Omega would start "Operatsiya Izbavitel" to rescue "Zykov" and capture the entity.

During Omega's attempt to free "Zykov" from the Dark Aether, the Requiem strike team arrived at the Omega test site to stop them from releasing the entity. When freeing "Zykov", he reveals himself to be the Forsaken, and that he deceived Peck into creating the machine to allow him to enter their world. Peck then tells Kravchenko that he didn't know that "Zykov" was the Forsaken, and the latter slaps him and calls him a fool for bringing the "wolf" through the door. The two are attacked by zombies, forcing them to hide as Requiem focuses on trying to stop the Forsaken. While holding off the horde, Peck assists Requiem in telling them they can use crystals to power the neutralizer, much to Kravchenko's chagrin.

When the zombies start breaching through, Peck accidently shoots a gas line that causes an explosion. Requiem would succeed in capturing the Forsaken as Maxis stops the entity by going into the Dark Aether, causing a massive loss of Omega. Despite the destruction of the base, Peck managed to survive but was left heavily scarred as Kravchenko's fate is left unknown. In 1990, Peck would arrive to Japan, asking a fisherman to rent him a boat so he could find his "old friends". 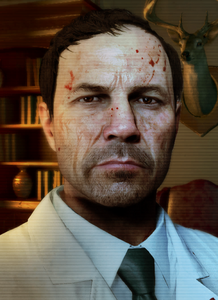 Peck being pushed into a corner by Kravchenko, who is preparing to take one of his eyes.