Having sex with Nicky.

William Rawlins is a major recurring antagonist in The Punisher MAX, appearing in the volumes "Mother Russia", "Up is Down and Black is White", and "Man of Stone".

He is an extremely greedy, traitorous, smug and cowardly ex-CIA operative and by far the worst of Kathryn O'Brien's ex-husbands, described as "a true child of the company". He's also Nicky Cavella's secret lover.

Rawlins' father was a field agent who worked in Cairo in the 1950s, keeping an eye on General Adbel Nasser after the Suez Crisis. His mother was a local girl, sadly unable to leave the country with her own son after the father was reassigned back to Texas. When Rawlins finally reached adulthood in order to inherit the family business, he began working within the heroin trade to support himself.

Ten years ago, shortly after marrying Kathryn O'Brien, Rawlins was sent by Washington D.C. to steal heroin from Afghanistan, tricking his wife into making her wanna "break the rules together" during their honeymoon. The escape helicopter took heavy ground fire as it flew off, forcing Rawlins to ditch some cargo in order for the pilot to keep flying. Rather than throw out the stolen drugs, however, Rawlins instead kicked out Kathryn and the gunner, resulting in the former being repeatedly raped by the Taliban, which Rawlins even cruelly mocks her about in the present day by calling her "the bukake queen of Kabul". At some point afterwards, Rawlins started a homosexual relationship with Nicky Cavella.

In his first appearance, Rawlins sets up a terrorist cell in Saudi Arabia and orchestrates the hijacking of an airplane full of innocent people, intending to crash it into Moscow (and frame it on the Arabs) as a distraction while the Punisher extracts the last remaining sample of the Barbarossa virus. The plane is shot down by missiles in order to protect the people below, killing everyone onboard. Later on, Rawlins was assigned by his generals into helping Nicky Cavella take down the Punisher. He failed in this endeavor and was then abducted by the Punisher and O'Brien, the former of whom took out one of his eyes and then forced him to reveal his involvement in the plane explosion in Moscow. However, Rawlins later escapes from custody while also killing William Roth.

In his third and last appearance, Rawlins works up an alliance with General Nikolai Zakharov in one last attempt to take down both the Punisher and his ex-wife O'Brien. During this, the two men force the Punisher into surrender by threatening to bomb just under 400 people in the mountain village of Hazar with a MOAB. As the Punisher hides a razorblade in his wrist to break free and shoot Zakharov's pilots in the back, O'Brien sneaks onto the outside of Zakharov's helicopter and uses her knife to cut the wires on the release mechanism, jamming it and thus making the bomb unable to drop. After the Punisher jumps out of the helicopter and lands safely onto the desert sand below, Rawlins uses the opportunity and tackles Zakharov out of the helicopter while his back is turned, using his body to cushion the fall and thus mortally wounding him. The helicopter lands and explodes in the middle of the desert with no casualties apart from the pilots, while Zakharov's lieutenant, Viktor "Dolly" Dolnovich, goes after Rawlins with a machete. Feigning surrender, Rawlins draws Dolly off his guard and uses his switchblade to slit his throat, mortally wounding him as well. Upon finding a photo of Dolly's family in his wallet, Rawlins sadistically threatens to find the man's young son and rape him to death in Moscow, before then leaving both him and Zakharov to die in the desert.

Meanwhile, from the Punisher's viewpoint, O'Brien accidentally steps on a claymore mine, mortally wounding her. Before she dies though, she asks the Punisher for just two things: stay by her side so she doesn't die alone, and kill Rawlins. He ultimately keeps his promise when he finds Rawlins in a Moscow airport bathroom, hacking him to death with Dolly's machete (which he found while mercy-killing him and Zakharov) as Rawlins feebly begs for mercy. 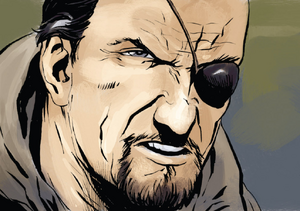 Rawlins kicking his own wife out of his escape helicopter. 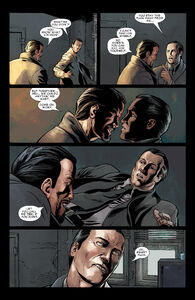 Rawlins about to copulate with Nicky Cavella. 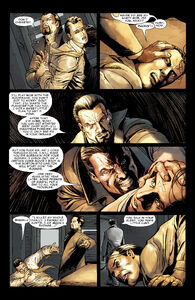 Rawlins blackmailing Nicky just after they had sex. 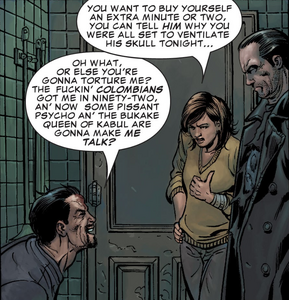 Rawlins cruelly and smugly mocks his ex-wife over her past experience with the Taliban. 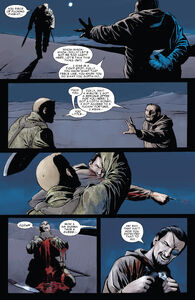 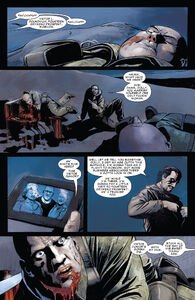 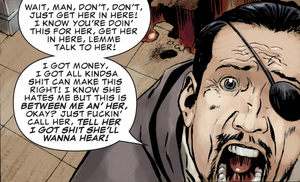 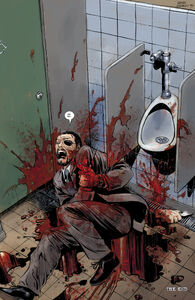