Spiral: From the Book of Saw

Place corrupt cops in traps and to “reform” them or kill them if they fail (ultimately succeeded).
Become a cop to be partnered with Zeke banks.
Test Bozwick for lying on the stand.
Test Fetch for being a dirty cop.
Test Angie for covering up criminal cop actions.
Test Pete in retribution for killing his father.
Kidnap Marcus Banks and use him as a symbol of being a corrupt “pig” before having him killed by the cops (all succeeded).
Persuade Zeke to join him.
Reform the police force (both ongoing).

William Emmerson, otherwise known as William Schenk or the Spiral Killer, is the deuteragonist and main antagonist of Spiral: From the Book of Saw, the ninth installment of the Saw franchise.

He is introduced as a rookie partner to Ezekiel "Zeke" Banks, the main protagonist of the film, aiding him on the search of the Spiral Killer, a Jigsaw copycat who targets crooked cops. It later turns out that Schenk is actually the Spiral Killer, wanting to clean up the corrupt system as his father was murdered by a corrupt police officer in the past.

He was hiding in the closet when his father was shot to death by ex-officer Pete after he promised that he would testify against a dirty cop. Seeing the effect of police brutality at full force, Schenk would spend years formulating a plan to free the city of its corrupt police force. To do so, he would use some of the original Jigsaw Killer's ideologies such as the pig motif.

Spiral: From the Book of Saw

During a Fourth of July celebration, Detective Marv Boswick chases a thief into the subway station where he is ambushed by a man in a pig mask. Boswick is placed in a trap where he is forced to rip out his tongue in two minutes unless the train arrives and kills him (poetically, Boswick had lied under oath numerously). Unfortunately he is unable to save himself, and he is hit with the full brunt of the train.

The next day, Det. Ezekiel "Zeke" Banks is appointed by the police chief Angie Garza to break in the new rookie William Schenk.

Sometime after the death of Detective Boswick, Fitch, an officer who had ignored a backup call, is the Spiral Killer's next victim. He finds his fingers restrained in a trap and is told that in order to survive, he would have to rip his fingers off before the water basin he was trapped in fills with water and reaches the wires around the basin. He too fails and is electrocuted to death. Due to his history with Fitch, Zeke is gradually implicated as being the murderer. The police department is delivered a box containing a pig puppet and what appeared to be Schenk's tattooed skin. They take a vial from the box and are led to a butcher shop where they find a skinned corpse and a tape recorder. Marcus, a retired chief and Zeke's father, decides to investigate himself but is also abducted.

Realizing that the killer was now going for the head of the police department, Zeke tries to stop the killer. Trapped in the precinct's cold storage room, Angie is made to severe her own spine in order to avoid being smothered to death by hot wax. The door is broken down, but Angie nevertheless succumbs to her injuries.

The Spiral Killer then attacks and kidnaps Zeke chaining his arm to a pipe. After freeing himself with the help of a bobby pin, he discovers Pete suspended in the air. Zeke is given a choice by the Spiral Killer: either leave Pete to die by having shrapnel of shattered glass to bludgeon him, or he could rescue him. Despite choosing to save him, Pete dies of his injuries. Schenk is revealed to have faked his death by skinning the junkie he used to lure Boswick into the subway station. It is there that Schenk explains that his real motive was to use Jigsaw's vision to reform the police force and desires for Zeke to be an apprentice of his because he was the one who reported Pete for the murder of his father.

He takes Zeke to his father whom he explains knew that all the corruption was going on under his nose, but allowed for it. Marcus is suspended in the air with his blood being drained into tanks below. He gives Zeke an ultimatum: either he shoots the target on Marcus' trap and he makes a clean get away, or he could kill him with the one bullet he had in his gun, but his father would bleed out. Zeke chooses the latter before fighting Schenk. Prior to this, Schenk pretends to be a civilian and dials 9-1-1 to claim he was being harassed by an active shooter. The SWAT team arrives and start breaking down the door, but this unwittingly raises Marcus back in the air like a puppet on strings, and he is shot dead under the assumption that he was the shooter. Zeke screams in agony as Schenk escapes. 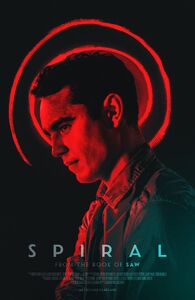 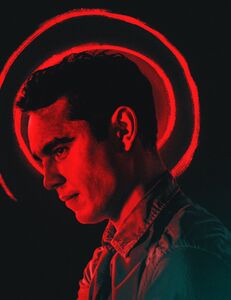 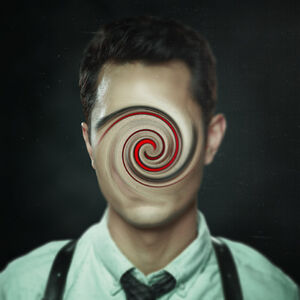 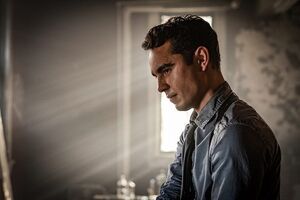 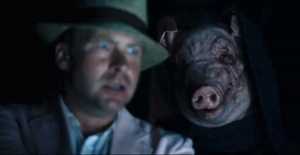 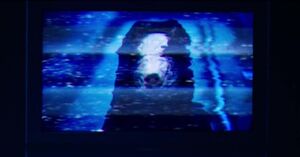 William on a tv, speaking to one of his victims.