Kill Casey Ryback once and for all.

Steal two Tomahawk missiles in order to sell them both to the Black Market even if it would later cause World War III.
Launch the Tomahawk missiles towards Honolulu, Hawaii (all failed).
Hijack and take over the USS Missouri ship (succeeded).

William "Bill" Strannix is the main antagonist of the 1992 political action thriller film Under Siege.

He is a terrorist leader and former CIA operative who intends to sell two Tomahawk missiles to the black market by hijacking the USS Missouri ship which would in the future would cause a World War III. He knew Casey Ryback back in another place.

Strannix is a former CIA operative who specializes in taking over enemy vessels. When it became clear that he was mentally unstable and had grown too independent and too powerful, CIA director Tom Breaker tried to assassinate him and failed. Strannix then disappeared for years; when he resurfaced, he took over the nuclear-capable USS Missouri.

Strannix is a cold, capable military leader with a dark sense of humor. As a CIA operative he is trained in military tactics, firearms, martial combat, disguise, and other dangerous skills. Whether angry or jovial, he appears to be under constant stress and on the verge of a psychotic breakdown (which Ryback's meddling eventually causes).

With the help of Krill, Strannix and the commandos board the USS Missouri disguised as entertainers and caterers for the Captain's surprise birthday party, with Strannix himself posing as the leader and vocalist of Mad Billy and the Fabulous Bail Jumpers. His seizure of the Missouri is swift and frighteningly efficient, especially when he demonstrates that anyone who resists will be shot along with the man next to him. When the ship is under his control, Strannix calls Admiral Bates and pretends to be a psychotic revolutionary. In reality, he only wants to smuggle the Missouri's nukes onto a stolen submarine, destroy the tracking stations in Pearl Harbor to mask his escape, then sell the nukes on the black market.

When Casey Ryback escapes and runs amok in the ship, everything falls apart: Strannix's forces struggle to get the nukes offloaded on schedule, but Ryback sabotages their every attempt, costing them valuable time as Admiral Bates comes closer and closer to ordering an airstrike. When the submarine is sunk and the nukes lost, Strannix snaps: he fires two more warheads at Pearl Harbor in retaliation and sits back to watch the fireworks. At this point, Ryback confronts Strannix in the control room and it is revealed that the two men knew each other. Ryback, after brief chitchat, breaks free from Strannix's gunpoint hold and engages the last remaining terrorist in a knife fight for control of the missile self-destruct key: after exchanging several cuts and gashes (Strannix getting most of them, of course), Ryback gouges out Strannix's eye, buries his knife in his skull and throws him headfirst through a radar screen. The Air Force only manages to shoot down one of the airborne nukes, but Ryback successfully disarms the other from the ship, thus saving Pearl Harbor. 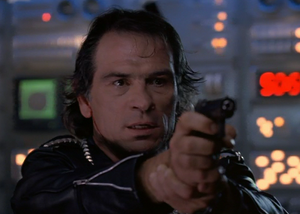 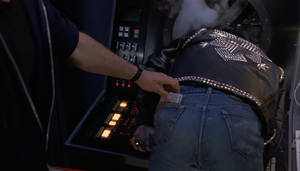