Founder and leader of Humanity Front

Convince the US Government to impose strict regulations on Human Augmentations

Advance the Goals and Agenda of the Illuminati

William Taggart is the main antagonist in Deus Ex: Icarus Effect and a major character Deus Ex: Human Revolution. He's the founder and leader of the pro-human organization known as Humanity Front and advocates for strict regulations on human augmentations and is a secret member of the Illuminati.

Not much is known about Taggart's early life but he was born in 1972 in the United States and rose to fame in 2021. Following a case involving a construction worker wanting to amputate himself and get human augmentations to compete with his augmented peers, he formed Humanity Front to limit augmentations.

Taggart appears in Deus Ex: Icarus Effect as the main antagonist. 55 years later in 2027, he appeared at the city of Geneva, Switzerland to get ready for a speech to the world when he gets attacked. he instantly becomes a target for The Tyrants as they plan to assassinate him. Ben Saxon fails to kill him but he is instead attacked by Scott Hardesty who misses and instead kills Taggart's Secretary. The failed assassination attempt soon ignites and fuels the fire for an even greater and bigger debate on the regulation of human augmentation to the US Government and he holds a gun at Saxon as says "Did they send you?".

Willian Taggart appears again in Deus Ex: Human Revolution as one of the major characters of the game. He is mentioned by David Sarif after he had made a speech at the United Nations about regulating human augmentations and continues to add pressure towards the UN as heard in many news reports in the game. He physically appears after Adam Jensen returns from Highland Park and escapes the FEMA Camp built there. Taggart then appears alongside his bodyguards and personal aid, Isaias Sandoval. He then talks to Jensen and wants to speek with him and condemns the violent actions commited by the anti-augmentation terrorist organization Purity First. The player then has the choice to either listen to Taggart's belief that human augmentations will endanger the human race or immediately confront him on the Purity First terrorist attack.

Though Taggart contains some heart, he is cold and calculus. He wants nothing more but to regulate human augmentation and does whatever is needed to add enough pressure to convince the US Government to do so. He is even willing to go towards the United Nations and have regulations imposed on human augmentations and doesn't seem to think about the effects it'll have on augmented individuals. 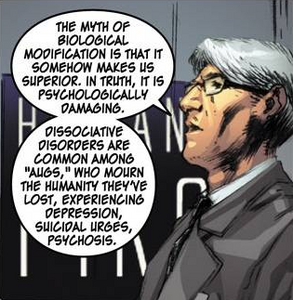 Taggart doing a lecture on augmentations 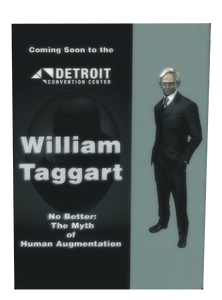 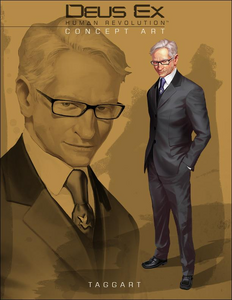 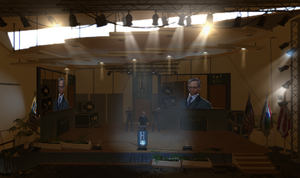 Retrieved from "https://villains.fandom.com/wiki/William_Taggart?oldid=3544966"
Community content is available under CC-BY-SA unless otherwise noted.