Colonel of the Green Dragoons

Win the Revolution for the British army and defeat the American army.

Kill Benjamin Martin and anyone who gets in his way (both failed).

He was portrayed by Jason Isaacs, who also played Colonel Mekum in Soldier, Lucius Malfoy and the Basilisk in the Harry Potter film franchise, Captain James Hook in the 2003 Peter Pan film, Zhao in Avatar: The Last Airbender, Ra's al Ghul in Batman: Under the Red Hood, Satan in Castlevania: Lords of Shadow, The Grand Inquisitor in Star Wars Rebels, Dr. Heinreich Volmer in A Cure for Wellness, Dracula in Monster Family, Gabriel Lorca in Star Trek: Discovery, SkekSo in The Dark Crystal: Age of Resistance and Dick Dastardly in Scoob!.

As the colonel (and therefore leader) of the Green Dragoons, Tavington is portrayed as a charismatic sociopath and a brutal commander. Long ago, his late father squandered the family fortune, along with Tavington's inheritance. He becomes interested in becoming a landowner in the Ohio territory after the war, and is nicknamed "The Butcher" by Brigadier General O'Hara. The character is loosely based on Banastre Tarleton.

Despite being an archnemisis to protagonist Benjamin Martin, Tavington has quite a lot in common with him. Like Benjamin, he's a experienced military leader who often engages in violent, unorthodox tactics in battles to achieve victory. Additionally, Tavington wishes to be a landowner so that he can live a normal life, like Benjamin did following the French and Indian War. However, the similarities stop there. Benjamin felt ashamed and horrified by the atrocities he had committed during the war, and had trouble forgiving himself for what he had done. Tavington, by contrast, shows absolutely no remorse whatsoever for the atrocities he commits, both past and present, and will stoop to whatever low he can to achieve his goals and cement his legacy. Furthermore, while Benjamin sought to avoid conflict whenever he could, Tavington sought to provoke it, like he tried to do when he taunted Benjamin for his murder of Thomas.

When a young man named Gabriel Martin signs up to join the Continental Army during the American Revolution in 1776, he is eventually forced to return home to his father, a French and Indian War veteran named Benjamin, and his six siblings following the Siege of Charleston. The wounded Gabriel is accompanied by many British and American soldiers who were also injured during the battle, but as Benjamin and his family take care of them, Tavington and his Dragoons appear in an attempt to arrest Gabriel. When Benjamin's son Thomas tries to free Gabriel from Tavington's men, Tavington shoots him dead. As Benjamin grieves for his son, Tavington has his house burned down and orders every wounded American soldier to be executed. Benjamin and his other two sons, Nathan and Samuel, track the redcoats holding Gabriel and brutally murder them. Tavington hears this news from a lone survivor, though he is unable to discover who is behind the massacre and labels the assailant as the "Ghost".

Benjamin is soon given the rank of colonel by his former commanding officer, Colonel Harry Burwell, and he and Gabriel then plan to fight the British forces. Lord Cornwallis, a general in the British army and who Tavington is serving under, discovers that the "Ghost" and his followers have been attacking his units, stealing his belongings (including his two Great Danes given to him by King George III) and destroying his ferries heading to Charleston. An irritated Cornwallis blames Tavington for provoking the attackers with his brutal mannerisms, yet Tavington manages to persuade Cornwallis to allow him to use these mannerisms to deal with them. Tavington goes out in search of the identities of some of the assailants and kills their families before burning their houses down. He discovers Benjamin's identity and travels to the house of Benjamin's sister-in-law, Charlotte, who is looking after his children. Tavington and his men search the house but Charlotte and the children manage to hide from them. Tavington later rides to the town that supplies Benjamin's forces and assembles its inhabitants within the church, claiming that they will be forgiven for their actions if they reveal to him where Benjamin's secret hideout is located. One man reveals the location to him but Tavington has the church burned down anyway, killing everyone inside, including Gabriel's new wife Anne.

Gabriel hears word of Tavington's slaughter and furiously attacks him and his men at their encampment. When only Tavington remains, Gabriel shoots him and he collapses to the ground. Unsure if he is dead or not, Gabriel approaches the body in an attempt to stab him, only to have Tavington rise up and stab Gabriel himself before fleeing. Benjamin arrives and cradles his dying son in his arms, but manages to gather enough strength to continue fighting after being reminded of Gabriel's dedication to the cause.

Benjamin, his followers, and a Continental Army regiment later attack Cornwallis' forces in a grueling battle, during which Tavington targets Benjamin personally. Benjamin manages to knock Tavington off his horse and prepares to shoot him, but ends up hitting him in the shoulder after an explosion distracts his aim. Tavington attacks Benjamin with a sword and despite Benjamin's attempts to block him, he is soon beaten and Tavington prepares to deliver the final blow. However, Benjamin ducks just in time and grabs a bayonet lying nearby before stabbing Tavington in the gut. Tavington stumbles and gasps, and Benjamin finally avenges his two sons by stabbing Tavington once more through the throat, killing him.

After Tavington's death, General Cornwallis and his men surrendered in 1781 in Yorktown Virginia and giving the USA their independence.

Tavington ordering Benjamin Martin's son Gabriel to be hanged as a spy.

Tavington trying to find out who slaughtered the redcoats holding Gabriel captive.

Tavington with his superior Lord Cornwallis.

Tavington being scolded by Cornwallis for provoking Benjamin and his followers.

Tavington making a hostile exchange with Benjamin, who promises to kill him in revenge for Thomas' death.

Tavington attempting to discover the whereabouts of Benjamin's family.

Tavington trying to find Benjamin's whereabouts from the townspeople who have been aiding him.

Tavington orders the townspeople, including Gabriel's new wife, to be burned alive in a church.

Tavington engaging in a gunfight with Gabriel, after Gabriel discovers his wife is dead.

Tavington killing Gabriel with a sword before making his escape.

Tavington duels Benjamin during the final battle against Cornwallis' forces. (Tavington: Kill me before the war is over, will you? It appears that you are not the better man.)

Tavington meeting his death by being stabbed through the throat with a bayonet knife by Benjamin. (Benjamin: You're right. My sons were better men.) 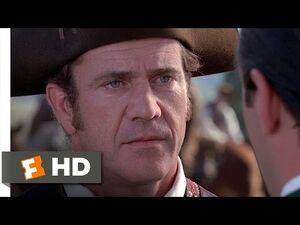 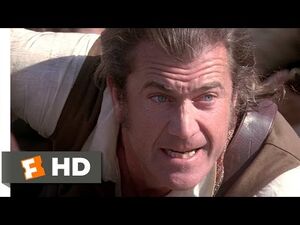 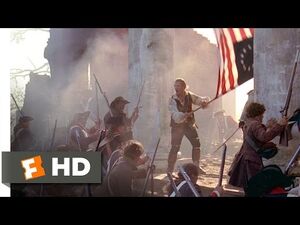 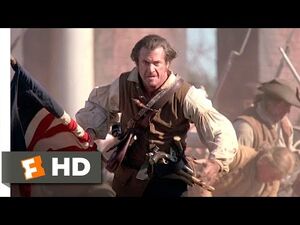 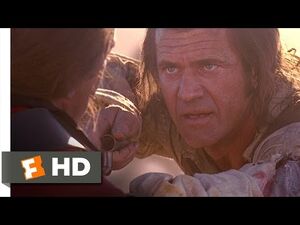