NOTE: This article is about the incarnation of Clock King from the Arrowverse. The mainstream version can be found here: Clock King.

Helping his sister with money from his heists (Arrow)

Escape from custody (The Flash)

William Tockman is a minor antagonist in the series Arrow. He uses henchmen to steal things of value. During heists he tracks his henchmen over security cameras and gives them orders to avoid getting caught. His operations rely on a strict time table.

Tockman is a bank robber and former employee of Kord Industries. He suffers from MacGregor's Syndrome, a terminal illness, but instead of using the stolen money to ameliorate his own condition, spends it to help his sister who has cystic fibrosis.

He sends two of his henchmen to obtain a device out of a heavily guarded building. He gives his men precise orders which they follow until one of them panics which leads to them getting seen by a security guard whom they shoot. Although they manage to escape, Tockman kills the one responsible for turning his operation into murder.

Two of his henchmen rob a bank. Tockman observes them and when he sees the Arrow approaching, warns them to get out immediately.

To avoid his men getting caught he hacks the public transport of Starling City which almost leads to a train colliding with a bus. However, this is foiled by Arrow last minute. He also hacks into Arrow's communication.

When Arrow finds out Tockman's identity, he arrives at Tockman's van only to find it empty except for a remote signal. When Felicity tries to encrypt the signal, Tockman hacks into her system and fries the entire computer systems inside Arrow's hideout. Arrow plans to give Tockman a target to rob so that he can stop him while he is doing so and leads Tockman into robbing Oliver Queen's vault at Starling Safety Deposit Service.

Taking the bait, Tockman sends two henchman inside and hacks Arrow again, also disabling the gas inside the building to have it explode. After Diggle stops the gas leak and Arrow takes out the men, Tockman appears and shoots at the Canary but misses. Before he can shoot again, Felicity knocks him out by exploding his cellphone.

Brought to Central City, Tockman is arriving at the CCPD just the moment Barry Allen, known as the Flash, is leaving it. Meeting Allen in the elevator he congratulates Barry on his clock, lamenting that all of his were taken. Barry tells him that it is his own fault for doing whatever he did.

Eventually, the meta-human Farooq Gibran siphons electricity at Star Labs, causing power outages in the entire city. Tockman uses the opportunity to free himself and take the gun from the policeman guarding him. After shooting him, Tockman forces policemen to drop their weapons, shooting another when he attempts to shoot Tockman.

After tying up the hostages, Tockman contacts the commissioner and demands a helicopter, a laptop with eight gigabyte RAM and a vegetarian takeout meal. While waiting for his conditions to be met, Joe West tries to talk Tockman into giving up. However, Tockman reveals that his sister has died and that the Central City DA refused to allow him visiting her on his death bed and that he is therefore ready to go as far as needed to not enter a prison cell ever again. Detective Eddie West, who had been hiding from Tockman then shoots Tockman in the back while the latter looks out of the window. However, Tockman is wearing a bullet proof west and returns fire, hitting Eddie in chest and shoulder. He then calls the commissioner outside, ordering him to pick up the pace in meeting his demands as a police officer has already been shot.

However, convinced by Joe and his daughter Iris Tockman stabilizes Eddie. While he does so, Iris tells him that he will go back to prison. Eventually, Tockman's escape helicopter lands on the roof of the precinct and Tockman takes Iris as a hostage to safely escape. Joe offers to go with Tockman instead of Iris but Tockman refuses that. But Joe manages to convince him to let Iris at least say goodbye to Eddie, as he most likely wouldn't survive the night. Tockman accepts, unaware that Iris is secretly taking Eddie's gun. While heading to the helicopter with Tockman, Iris draws the gun and shoots at him, wounding but not killing him. Tockman is then apprehended by the CCPD. 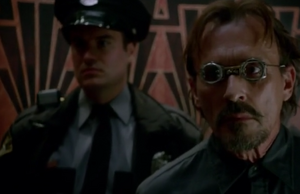 Tockman is brought to the Central City Precinct. 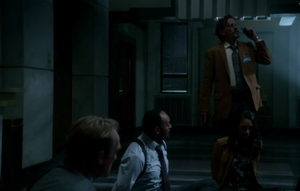