Steal as many things as possible.

Charismatic Thieves
William and Petunia are the main antagonists of the episode "Vigor the Visionary" in Tangled: The Series.

Petunia was Voiced by Kathy Najimy and William was voiced by Christian Borle.

At some point, William and Petunia meet each other and became The infamous Daylight Thieves, but other than that not much is known about there backstory

During the episode Vigor The Visionary attempts to lead Angry to her long lost parents but he is actually leading them to the daylight thieves. When they get to the cabin, William and Petunia pretend to be Angry's parents and pretend to take Angry and Red in so Rapunzel and Eugene leave.

But after they do, William and Petunia reveal their true nature and in order to prevent their hideout from being discovered they try to hold Angry and Red hostage and cut down the bridge to either kill Rapunzel and Eugene and prevent them from rescuing Angry and Red

Rapunzel and Eugene survive but when they go the rescue Angry and Red they find they have already taken care of William and Petunia on their own foiling their days of thieving. What happened to them after their defeat is unknown, but they were presumably arrested for their crimes. 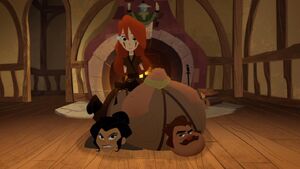 William and Petuina's Defeat
Add a photo to this gallery

Retrieved from "https://villains.fandom.com/wiki/William_and_Petuina?oldid=3648809"
Community content is available under CC-BY-SA unless otherwise noted.