Leading Paradeus.
Plotting and scheming.
Manipulating others.
Revelling the chaos that he created.
Antagonizing his enemies.
Torturing and experimentating on his victims.
Abusing his minions.

Take over the world.
Take revenge on Persica and Lycoris. (failed on Persica, but succeeded on Lycoris)
Obtain the Relics and use them to revive Lunasia.
Use the Collapse Fluid to turn all of the humans into ELID.
Destroy the Commander and the T-Dolls.
Capture and take control of the OGAS.
Eliminate Griffin & Kryuger, Team 404, DEFY and anyone who opposes him (all failed).
Destroy the Antartica Reunion.
Capture Jefuty (both ongoing).Remake the world into his own image to become a god (all ongoing, would most likely fail).

He is a researcher who was the former member of 90WISH and the current leader of Paradeus after he usurped and murdered William and stole his identity. He is also the creator of the Nytos. He is also responsible for masterminding the Butterfly Incident and the rest of the entire story that occurred in the game.

Later in Chapter 13, he was revealed to be the brother of Lunasia. He also serves as an archenemy of the Commander and the T-Dolls.

Following his revival, he became the member of the Union of Rossartrism Coalition as he aided them on capturing Jefuty and Noel and destroying the Antartica Union. However, it was later revealed that he was using them to further his ultimate goal and planning to use Jefuty and Noel as the weapons of mass destruction.

William von Oberstein was portrayed as a cruel, sadistic, dangerous, immoral and ruthless person who was responsible for all the bad events that took place in the story and took delight in the chaos and destruction that he caused while not caring for others' sufferings in order to further his goal with the lack of empathy and remorse.

He was also known to be very intelligent, cunning, charismatic and manipulative as he easily manipulated both enemies and allies, both directly and indirectly from behind the scenes and also willing to betray and dispose them like garbage once they have outlived their usefulness. He also pretended to be affable and polite towards the others, though this only served to hid his actual nature.

Even despite being the creator of the Nytos who addressed him as 'Father', William did not care for them or see them as his own children as he viewed them as tools for his ambition. He was also very abusive towards them and does not hesitate to callously sacrifice them when they are no longer useful to him. This also explained of why the Nytos were afraid of him.

Despite that, William started off as the good person in the past as he was a loving and caring brother of Lunasia as they always take care of each other and played together in the past. However, her death is the cause of William's current personality as his anger and grief caused him to believe that the humans had murdered her despite that she actually died of illness, making him completely delusional, bitter, hateful and paranoid. His obsession of reviving Lunasia also drove him to commit his heinous acts in an attempt to bring her back to his side while disregarding the others' lives.

He is also a fetishist who was always delighted when he saw the people's faces filled with fear, hatred and despair as he used their negative emotions to his advantage.

His fatal flaws were his arrogant ego, god-complex grandeur and his lack of love and friendship as his heart had already blackened as he became a monster he was today. His obsession of obtaining the Relics and capturing the OGAS to take control of them, which indicated that he was also power-hungry. He was also known of being a psychopath as he was prone to fits of maniacal laughter, especially when the plan worked as he planned and also became angry when his plan failed or any of his minions failed him as he severely punished them and sometimes burst out in a psychotic tantrum.

In the end, his final flaw was that he lacked of the understanding of humans' actions and even the bond of love and friendship of the others. This also explained of why he was different from the Commander and his allies as the former have the pure of heart as he risked his lives in countless times to save the others while William was a coward all along as he was willing to use the dirty tricks and even sacrifices his own minions and allies for his selfish goal.

Born as Tessier Winter, William hails from Germany during the time of the World War III and was presumably an orphan who lost his family in the war before he was found and adopted by Rudolf von Oberstein, the head of the Max Planck Computational Science Institute. Once he was brought into the family, he became the brother of Lunasia von Oberstein, the only daughter of the family as the two of them always played together and took care with each other.

Despite that, he was also gifted as the intellectual genius as he passed all the subjects, which also earned him his peers' ridicule and subject of bullying. Because of that, he doesn't have any friends and he believed that his sister was the only companion to him.

However, when Lunasia died of the sudden illness, Tessier's behavior changed as he believed that the other people have killed her as his mind was consumed with grief and anger. Unable to cope with the loss of his sister, he vowed to have his revenge on the humans who he believed to ruin his life.

Upon reaching adulthood, he left his homeland and began his study in the university. Following his graduation, he joined the army and became a companion of Griffin Lyons, Berezovich Kryuger, Harvey Welkin and General Carter. However, he left the army and joined 90WISH where he became the colleague of the other two researchers; Persica and Lycoris, though he became a rival to the latter and have a passionate hatred for him.

When he approached Persica and Lycoris with a plan of creating the digital replica of Lunasia's mind so that she can be resurrected, they refused as William became disappointed and decide to plan his revenge on them. Later, he sent his assassins to kill Persica and Lycoris, though the two managed to escape from the attempt

Following the end of the war, he allied himself with the KCCO in the year 2061 and orchestrating the Butterfly Incident in order to eliminate Lycoris and accelerate the maturation of Elisa's OGAS. Later, he once again assisted the KCCO in their assault on Sangvis Ferri as the another method of accelerating Elisa's OGAS.

He later joined Paradeus and became the member as he assisted them on helping the downtrodden people in the small areas as they began to recruit them into their rank in order to remake the world a better place. However, Tessier grew disillusioned as he usurped and murdered William, the leader of the organization and stole his identity and began his campaign of destruction and genocide. He also associated with Powell who supplied him by kidnapping the children from the orphanage and bringing them to him. He then used the children to clone the Nytos to build up his army.

It was later revealed that William have contacted his old comrade, Carter and collaborated with him into helping with his plans and ordered the KCCO to keep an eye on the Griffin & Kryuger's activities.

When William learnt that the Collapse Fluid had used on the KCCO soldiers who were turned into the ELID, he became delighted with the scene and planned to obtain the Collapse Fluid and use it to turn all the humans into ELID in order to fulfil his goal.

William sent Nyto Obelisk and Nyto Polarday to eliminate the survivors who were not affected by the Collapse Fluid.

In the end of the story, he sent the Nytos to recover Polarday's remains after she was defeated by the T-Dolls.

William sent the two new Nytos; Nimogen and Mercurrows to attack the peace summit held by the UN and Soviet Republic.

When Wiliiam learnt of Nimogen's failure, he became disgruntled and sent her to Talinn to left her to rot.

Soon after that, he secretly betrayed the KCCO after he found them to be outlived of their usefulness to his plan and make his next move.

William later sent Morridow to infiltrate to the city of Bremen and contacted Powell to instigate the riot in the refugee settlement area. He also tasked Morridow of capturing Angelia who he believed to be the threat to his plans. He also sent his army units to break into the abandoned Sangvis Ferri base and took all the components for him to create the Gebbennu.

Later, William planned to use Gebbenu by fitting it with the bomb and using Angelia as the core to destroy Berlin before planning to destroy the rest of the world. He also sent his minions to capture Dandelion and take control of her power. He also secretly contacted RPK-16 who gave him an information about Angelia and her activities and had her assisted Lady Grey on capturing her.

During the conversation between the Commander, Dandelion and Machlian, it was also revealed that William once experimented and tortured the latter in order to use her blood for his plan before abandoning her in the past as he viewed her as useless to his plan.

Although William did not appears in the story due to his supposed death, he was mentioned by the characters in the story. However, his actions also led an impact on everyone else as the world was ravaged by the ELIDs and new enemies who were led by their leader in the not far future.

He also appears in Angelia's nightmare as she suffered from PSTD due to the trauma that she endured in the previous game and even have hallucinations of him.

William is the most intelligent person in the world as he possessed the genius-level intelligence and was capable of making his plans before executing them.

As the head of the Paradeus, William have an absolute control on the entire organization as he gave orders to his subordinates and demanded of their complete loyalty and would not accept the failures of the missions.

William was an excellent master manipulator as he manipulated both allies and enemies alike against one another and also have an aura of charisma as he easily swayed his allies into helping his plans in order to fulfil his goal.

Being the most talented scientist, William was skilful at biology and genetic cloning as he was capable of creating the army units and cloning the Nytos. He also learnt the scientific method to cheat death by transferring his mind into the another body as it was shown that he transferred his mind into William's body which he preserved in the story.

William was also known to be the skilful torturer as he tortures his enemies and victims alike, physically, emotionally and psychologically, even before outright killing them and brainwashing them.

As the leader of Paradeus, he was also a brilliant leader who was skilful of making strategists and giving orders to his minions.

Despite his intelligence and a great master manipulator, William have several severe weaknesses:

William appears to be a frail old man as he was not a fighter and can get vulnerable easily as he relied on his minions to protect him.

William appears to have a megalomaniacal and god-complex personality as he despises oppositions and failures as he believed himself to be superior towards the other people, making him having a narcissistic and delusional grandeur. 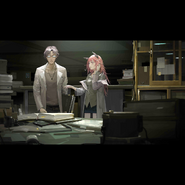 William talking to Lycoris and Persica.