The Man in White
The Spy
Hunter


Manipulating Ajay to rid of the CIA's presence in Kyrat by blindly killing their assets with his knowledge (Far Cry 4).

Keep tabs on/and eventually kill Hoyt Volker with the help of Sam Becker and his CIA Team (failed).
Have Jason meet with Sam Becker and using his and Becker's connections make Jason embedded with Hoyt's troops.
Use Jason Brody to kill Hoyt Volker due to Jason's vendetta for Hoyt for imprisoning his brother.
Leave the Rook Islands.
Help Ajay find out about his parents past.
Manipulate Ajay to into cleaning house for him by eliminating CIA assets in Kyrat formerly following Pagan Min's drug trafficking operations and erasing the CIAs footprint in Kyrat.
Hand Ajay over to the Royal Guard (all succeeded).

He was voiced by Alain Goulem, who also voiced one of the Twins in Outlast, and Charles Gabriel Sivert in Assassin's Creed: Unity.

Back in the late 80's, Willis Huntley was noted in his psychological array as a "focused" recruit. He's since participated in a series of CIA operations intended to steer the governments of Iran, Iraq, and Somalia. Willis is confident, fearless, calculating and loyal to the agency and to his country.

Fresh in from Task Force 141 in Russia, Willis is back in Kyrat for the first time in decades. Previously he was there to install operatives deep into Pagan Min's organization, a joint op between Langley and the DEA. Pagan was pumping way too much heroin into the streets of the US to go unnoticed. Now Willis is back in Kyrat and he needs someone who is willing to get their hands dirty, someone he can control via the knowledge he has of Kyrat's recent past and a man named Mohan Ghale.

At some point, a few years before 2012, Willis, Sam Becker and a team of CIA operatives were ordered by the CIA to go to the Rook Islands in order to keep tabs on and eventually terminate notorious slave and drug trafficker Hoyt Volker.

In the North Island, Willis took up residence in a house in Badtown where he would gather intelligence about Volker and his psychotic right-hand man Vaas Montenegro. Through unknown circumstances, however Willis lost contact with his crew when they were sent on a reconnaissance mission in the Southern Island which was "owned" by Volker.

Driven by a hallucination, Jason seeks out the "man in white" (Wilis) to lead him to his kidnapped friends. Jason's search leads him to Badtown, where he discovers Willis at a bar, and tails the agent back to his home, seemingly undetected. Upon entering, however Jason finds the door locked behind him and Huntley demanding to know who he is before he kills Jason with concealed C4. Jason introduces himself much to Willis's interest and is sent through a concealed door down to Willis's lair to "trade favors".

Jason learns that Willis is from the CIA and that for some time he has been gathering information on Hoyt and his drug and slave trade operation. Willis gives Brody some information about Hoyt and reveals that Hoyt is Vaas' boss. Willis gives a Flamethrower to Jason and tells him to set fire to Hoyt's drug field and boat to bring the kingpin to the island.

The plan succeeds and Hoyt Volker is drawn to Beras Town where he begins executing its inhabitants. A man associated with Willis avoids imminent death and is rescued by Jason. The man then gives Jason a transportation manifest that Hoyt was searching for; information on where Oliver Carswell is being held. Later, Willis points Jason to Buck, a hitman of Hoyt's who bought Brody's kidnapped Keith from Hoyt and has him in his possession.

Some time passes before Willis is heard from again. Jason contacts Willis to help him kill Hoyt. Willis says it cannot be done and adds that he plans to leave the Rook Islands and join Task Force 141 in Russia. As he departs Jason is offered a ride to Hoyt's Southern Island, if he reaches the plane in time. Jason arrives just in time to help Willis fend off some Pirates and give him time to repair the airplane.

As promised, Willis inserts Jason into his destination via high altitude and gives him a Wingsuit before leaving the Rook Islands, apparently for good.

Willis appears again in Far Cry 4, with missions that must be played in order to advance the main campaign, this time he has a short antagonistic role.

The first consists of raiding the only airport in the country so that Willis can safely land, before taking out the commander and staving off a retaliation attack from Royal Army.

The rest consist of flying to the Himalayas and killing various lieutenants of Yuma's Royal Guard. It is later revealed that these lieutenants were actually CIA informants and that Willis tricked Ajay into cleaning up evidence of the CIA's involvement in Kyrat. After this, Willis, claiming "Every patriot I know is a son of a bitch.", throws Ajay out of the plane just as Ajay was asking information on Yuma, to which Willis responds, "What I told you about Yuma... you can ask her yourself.". and leaves him hurt in the snow as Yuma's guards approach and take him to prison.

Willis is a traditionalist patriot with right-wing nationalist views, telling Jason that there were two kinds of patriots: "The people who hold their hand on their heart in a ball game, and those who fight for their country." He also displayed paranoia, believing that the United States is always threatened by foreign, non-western countries. He is also shown to be incredibly racist and xenophobic, often making racist remarks and using derogatory slurs on several occasions, and has a clear dislike of anything non-American, even hating Canadians as can be inferred by several entries made in the handbook. For example, when he was preparing his airplane to leave Rook Island, he said to Jason that he would upgrade in Singapore on his way to Russia, as well as commenting that chewing gum was banned there, and that since chewing gum was an all-American product, "the ricepickers" in Singapore were declaring indirect war with the US by banning it. When talking about the Kyrati people with Ajay, he referred to the Kyratis as "you people".

He also described Ajay as an "American on the inside, but useful on the outside", referring to Ajay having grown up in America but being an ethnic South Asian, much to Ajay's annoyance. In addition to that, he lamented on Ajay's manners, commenting during one of the cutscenes that "Americans knock". His racism is further backed up by the fact that he was willing to provide Jason with actual help and information, but used Ajay for his own means and abandoned him in the Himalayas by shoving him off the plane. Regardless, Willis was quite unphased even when in dangerous situations, indifferent to danger, calculating, and somewhat loyal or at least respecting his deals/agreements such as when he helped Jason in his search for his friends, fighting off a large group of pirates until Jason came to assist him, and helping him to get to the Southern Island to kill Hoyt Volker. 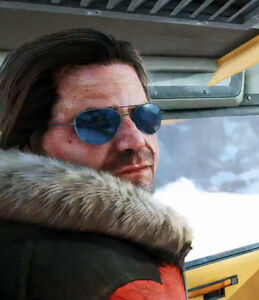 Retrieved from "https://villains.fandom.com/wiki/Willis_Huntley?oldid=4137074"
Community content is available under CC-BY-SA unless otherwise noted.