Kill the four main protagonists and use their body parts for his candy and chocolates as he did with countless others.

Willy Wonka is an antagonist in the infamous Epic Movie. He sends out four gold tickets and whoever gets them will be able to visit his factory.

He was portrayed by Crispin Glover, who also played George McFly in the Back to the Future franchise, Willard Stiles in Willard, Ilosovic Stayne the Knave of Hearts in Tim Buton's Alice in Wonderland and the disgruntled Silver Peaks Lodge bellhop Phil Wedmaier in Hot Tub Time Machine.

Eventually the four main protagonists (named Peter, Susan, Edward, and Lucy) get the Golden Tickets and they go to the factory. After Edward consumes the chocolate river (which is actually a sewage line), Willy greets them, only to reveal that the secret ingredient of his candy is real human parts, and intends on using the orphans in his next batch.

They try to escape but are captured. Willy proceeds to put them through agonizing experiments and took part in some of them, most notably kicking off Susan's head, though it is reattached while dancing to Fergie's "Fergalicious". He then puts his symbol on them all and locks them in a room, though they later escape. In the end credits of the theatrical version of the film, he is seen dancing as the Oompa-Loompas sing "He's Willy".

In the last scene, Willy, instead of Borat, comes in and says: "How was your epic adventure?". Willy then goes in the wardrobe and puts out a "do not disturb" sign that refers to the beautiful bikini lady in the wardrobe. The Oompa-Loompas come in and start singing the Willy theme song. The four are then crushed by the wheel. Also, during the scene where Lucy is crushed under the junk that falls out of the "Gnarnia" closet, the girl who runs out is nude, as opposed to wearing a bikini. 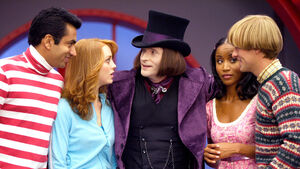 Willy about to reveal his ingredient and plans to the protagonists 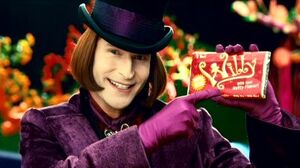 Willy's evil grin as he holds a chocolate bar.
Add a photo to this gallery 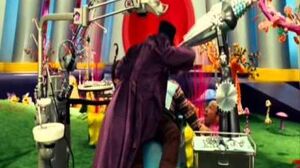 Epic Movie - Fergalicious scene
Add a photo to this gallery

Retrieved from "https://villains.fandom.com/wiki/Willy_Wonka_(Epic_Movie)?oldid=3775173"
Community content is available under CC-BY-SA unless otherwise noted.