Elemental Robot
Wind Man is one of the eight Robot Masters and a minor antagonist in Mega Man 6.

Wind Man is a orange and white robot with two propellers on his shoulders. His chest is green with two gray balls, his arms and legs are black, and his limbs white. One of his arms also wields a blue propeller.

Prior to Dr. Wily kidnapping and brainwashing him, Wind Man was a simple robot made to assist harvesting food. However, he was eventually reprogrammed by the mad doctor to have him lend his powers to assist Dr. Wily's evil schemes.

Wind Man appears in Super Smash Bros. Ultimate as a novice support spirit who grants the ability to do a quick-drop attack by tilting down while in the air. His spirit battle is a stamina battle on the Skyworld stage with high wind being in effect against a orange Mega Man who often jumping.

In this version, Wind Man is a Chinese robot that entered the first World Robot Championship in the story "The Strongest Enemy to Date".

Wind Man appears in the Worlds Collide crossover with most other Robot Masters. He joins Tornado Man and Gyro Man in attacking Tails.

Wind Man makes a cameo in the Rockman and Forte manga. 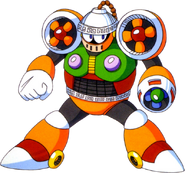