Manipulating people to obtain his own goals.

Find the Black Lodge through whatever means necessary.

Windom Earle is a meticulous and proficient serial killer, who lefts little to no clues, including a full absence of fingerprints and poses victims in rather eccentric ways, making tableaus, signifying some meaning. While his killing spree was originally stylized as a chess game with Dale Cooper with each victim being a lost figure of Cooper's in a play, it was later revealed to mostly being a facade for his real actions regarding The Black Lodge.

Windom Earle usually stabs his victims in aorta but could kill people in variety of ways, including crossbows and complicated traps.

He is a former FBI agent, and the former partner and best friend of Agent Dale Cooper. He features in the second season. He is an evil genius and a master of disguise, well-versed in esoterica from all parts of the world. He has extensive knowledge of the "dugpas", ancient Tibetan sorcerers dedicated to pure evil.

Cooper says of Windom Earle "his mind is like a diamond: cold, hard and brilliant." Interestingly, Tibetan Buddhism is sometimes referred to as the 'vajrayana', which can be translated either as the "lightning way", or the "diamond way". Agent Cooper is also interested in Tibetan mysticism, but of the good variety, so in this sense, Windom Earle is his evil opposite.

Earle claims to have killed his wife Caroline, the love of Cooper’s life. He also has a fascination with the Black Lodge, whose secrets he is trying to unlock, as well as black magic. Major Garland Briggs states that Earle was involved in Project Blue Book, as was Briggs; however, their investigation in which Earle was involved was directly related to Twin Peaks and not the usual UFO investigations.

He is obsessed with chess and this also plays a role in some of the episodes, when he decides to use real people as the pieces. When he had worked with Cooper, they played a game every day. Cooper enlists the help of Pete Martell, a genius chess player, to stalemate the game with as few pieces lost as possible.

At one point, Earle leaves a plaster mask of Caroline on Cooper’s bed, with a tape recorder underneath. At another, he shuts down the town’s power station causing chaos. He also hides a bug within a bonsai in Twin Peaks’ Sheriff’s Department, which Sheriff Truman thinks is from Josie Packard.

Towards the end of the second season, Leo Johnson is forced into enslavement by Windom Earle using an electric shock collar to control him. They capture Major Garland Briggs who Earle interrogates, fairly unsuccessfully, using Haloperidol. Major Briggs does, however, end up revealing that fear opens the gate to the Black Lodge.

Earle chooses “three Queens” (Audrey, Donna and Shelly) for a “gathering of the Angels,” by giving them each a third of a poem ('"Love's Philosophy" by Percy Shelley) and arranging for them to meet in the Roadhouse. However, in the end he uses Annie Blackburn for “queen” after she wins Miss Twin Peaks, and takes her into the Black Lodge.

Earle appears to be killed by BOB in the Black Lodge, when he attempts to take Cooper’s soul. BOB says that Earle cannot ask for souls, but he will take Earle’s. 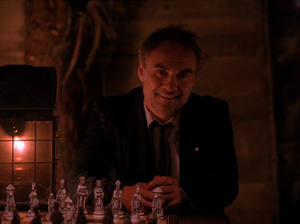 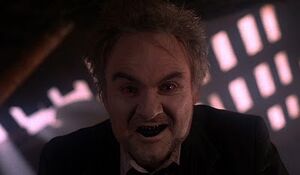 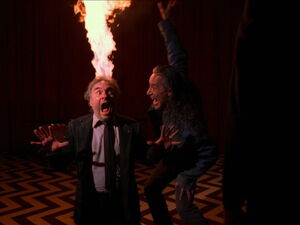 Windom's soul being taken by BOB.
Add a photo to this gallery
Retrieved from "https://villains.fandom.com/wiki/Windom_Earle?oldid=3707793"
Community content is available under CC-BY-SA unless otherwise noted.