Villains Wiki
Register
Don't have an account?
Sign In
Advertisement
in: Kids, Kids Next Door Villains, Cartoon Villains,
and 20 more

Windsor pretending to be a "tie hunter" in order to make Moosk an accountant again. He tried waiting for Moosk to slip up. But found out that Windsor made a deal with the Queen Tie who lived at Tieland Shopping Mall, to lure Moosk to Tieland, where she would use her breath to turn him into an obedient employee again.

Windsor reveals his true agenda and ordering the Queen Tie to attack Moosk and Numbuh 1, intent on bringing Moosk back to work, and even making Numbuh 1 another one of his father's "yes-men", the latter being rather illegal due to child labor laws. Preparing for the ultimate battle, the boys defeat every boy in the Earth. Numbuh 4 dismissed her immediately, but he accepted her after she gave them a Girlifying Rifle to reverse its effects. Numbuh 4 dismissed but he accepted to reverse its effects and make it to discover the headquarters.

However, they managed to made him to fall to the ground. Subsequently, Numbuh 4 was unable to call for help as Sector which reawakens his rebellious tie-hunting personality. Windsor on the other hand eventually becomes a Teen Ninjas member. 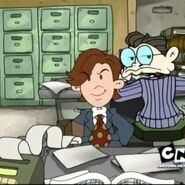