Razor-sharp beak to peck and slash
Flight and swoop
Talons

Can alternate between makeshift engines and wings.

Hunting and capturing the Stitchpunks.

Hunt down the souls of all the Stitchpunks for the B.R.A.I.N. (failed).

The Winged Beast is a secondary antagonist in the 2009 computer-animated film 9. It is one of the three machines specifically designed by the Fabrication Machine to hunt down and kill 9 and the other stitchpunks, the others were the Cat Beast and the Seamstress.

The Winged Beast resembles a pterosaur, using a tarp or a flag for its wings, and has a mouth that consists of knives, razors, and other similar sharp objects. It also has a harpoon launcher on its tail to snag its victims and a fan that helps it fly like an actual bird by gliding on air currents and flapping its wings, though it only uses its wings when its fan 'engine' is busted.

The Winged Beast was created by the B.R.A.I.N. shortly after it revives from its slumber to find the stitchpunks so it can absorb their souls. It eventually finds the stichpunks hiding in a cathedral and crashes into it as 1 was giving a severe lecture to 9 and 5 for failing to save 2. It knocked over a brazier of live coals into 6's wall of drawings, which started a fire inside the cathedral.

After a chase with the fleeing stichpunks, the Winged Beast is tricked into getting its harpoon cut off and the cable to get stuck into a plane propeller activated by 5 and 6. The Winged Beast grabs on to 1's cape in support, which forced 1 to let go of his cape, causing the Winged Beast to fall and be shredded by the propeller. After the stitchpunks escape the burning cathedral, a Seeker Drone retrieves the deactivated Beast's severed head, and brings it back to the Fabrication Machine, who then crushed it in anger, realizing that the stitchpunks outsmarted it.

Even though it failed to capture any of the stitchpunks, the Winged Beast's attack did some damages: now left without sanctuary, the stitchpunks are forced to risk the wasteland until they could find a new home. 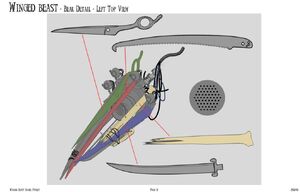 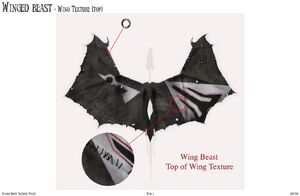 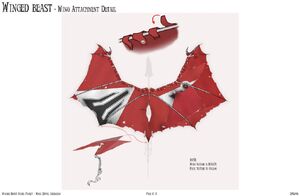 Retrieved from "https://villains.fandom.com/wiki/Winged_Beast?oldid=3892747"
Community content is available under CC-BY-SA unless otherwise noted.