Wings, alternately named Dorodabo, is a demon minion of Lord Slug and one of the three secondary antagonists (the others being Angila and Medamatcha) from Dragon Ball Z: Lord Slug.

He was voiced by the late Daisuke Gōri and Katsuhisa Hōki in Dragon Ball Heroes in the Japanese version and Chris Rager in the English version.

Wings accompanied Lord Slug to Earth and set out to find the Dragon Balls with help from Medamatcha and Angila. After the planet was terra-frozen by Slug, Goku and the other Z-Fighters came to stop the Namekian and Wings took on Piccolo. He asked Piccolo to fight for Slug, but Piccolo completely outclasses Wings and breaks his arm. And after a lengthy struggle with the Namekian, he is finally killed with a Ki Blast disintegrating his head.

Wings appears along with an army of deceased villains led by Frieza after Janemba ripped open a portal to Hell in Fusion Reborn. He charges at Gohan when Frieza sends the army at him. And later flees in terror with the other villains when Gohan effortlessly killed Frieza. He was most likely defeated and killed at some later point.

Wings can fly with his wings, has Superhuman stats, and can fire Ki Blasts. He also has an Energy punch attack named Evil Gravity in Dragonball Heroes. He is also stated to be weaker than Medamatcha and Angila.

His power level is listed at 39,500 in Dragon Ball Cardass.

Wings is revived and transformed into a Majin by Babidi in Dragon Ball Heroes. He appears again under the service of King of Destruction Slug. The Majin revival could have possibly increased his power. 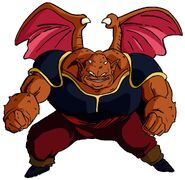