They are a secretive group of magical girls lead by the Magius, a trio consisting of Alina Gray , Touka Satomi, and Nemu Hiiragi. Members who executes the goals of the Magius are the "wings" of the organization and has at least two ranks; Black feathers the lowest ranking goons and the White feathers who are higher in rank than the Black feathers but beneath the Magius trio.

The intentions of the Wings of Magius are benevolent; that is to free the magical girls from their fate of becoming witches. However they don't hesitate to rely of questionable methods, such as protecting uwasa to victimize normal non-magical people. Some lower ranking members, who deparately cling on hope promised by the Magius, are kept in the dark regarding the true nature of their goals or the full extent of their methods. 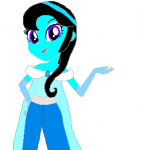