Practicing dark magic from her spellbook

Suck the life force from children, along with her sisters to stay young forever (briefly succeeded).

Get revenge on Max's sister Dani for calling her ugly.
Kill Max and his friends (both failed).

She is the eldest and most intelligent witch among her sisters Mary and Sarah. For their evil activities, Winifred and her sisters were sentenced to death by the Salem townsfolk in 1693, and later resurrected by Max Dennison in 1993. Upon her return, she and her sisters aspired to consume the life forces from children in order to achieve eternal youth and immortality. She is also the archenemy of Max Dennison.

She was portrayed by Bette Midler, who also played Kitty Galore in Cats and Dogs: The Revenge of Kitty Galore.

Winifred and her two younger sisters live in a cottage on the outskirts of Salem in the late 1600's. When she was a young woman, Winifred had a relationship with William "Billy" Butcherson. But when she discovered him cheating on her with her youngest sister Sarah, Winifred flew into a jealous rage and poisoned him, sewing his mouth shut with a dull needle so that he couldn't reveal her secrets even in death, as a punishment for being unfaithful to her. That also proved that Winifred was always the most jealous type among her own sisters.

At some point in her life, Winifred sold her soul, and possibly the souls of her sisters, to Satan in exchange for a spellbook of dark magic, which contained a recipe for a potion that would enable them to suck the youth from children and maintain their own.

In the 17th century, Sarah lures Emily Binx into the forest to the house where she and her sisters live. However, what she does not know is that Emily's older brother, Thackery Binx, saw them enter the forest and followed them. Inside the house she helps her two sisters, Winifred and Mary, concoct a potion which will allow them to take the life force of children in order to remain young. Thackery interrupts this, however, before they can give it to Emily and pours most of the potion onto the floor, but he is soon overcome by Winifred and they proceed to inhale Emily's life force, killing Emily. They then proceed to turn Thackery into a black cat with immortality so he can 'live forever with his guilt'. But once they perform this spell, the villagers arrive at their house and as Winifred and Mary barricade the door, Sarah stupidly says what the witches were doing.

The villagers capture the witches, but Winifred prophesies their return via the Black Flame Candle lit on All Hallows Eve by a virgin. She and her sisters are subsequently hanged and left within the forest.

300 years later, a Californian boy named Max takes his sister trick-or-treating and gets together with Allison, whose mother used to run the museum that was the Sanderson house. They break into the house and Max foolishly lights the candle, thinking that it's just a bunch of hocus pocus, and ends up resurrecting the Sandersons. Max steals Winifred's Spellbook at the behest of Thackery so that Sarah and her sisters cannot create the potion needed to steal the life force of children and they run.

The children all ran to the cemetery as Thackery led them. However, the witches all followed them on their broomsticks and nearly got the book back. However, before they can escape, Winifred raises Billy Butcherson, her former lover, back from the dead and instructs him to get the book back before flying away to the outside of the cemetery as they cannot set foot on hollowed ground. There they employ the help of a bus driver, ask him to find them children and eventually come across a house owned by a man dressed as the devil, who they mistake for their master. They subsequently get into a fight with the man's wife as Sarah was dancing with him, but are scared away by the dog. Outside they find that their broomsticks have been stolen.

The witches then follow the children to the party where Max's parents are and after being exposed to the room by Max, Winifred takes charge and ridicules him before singing "I Put A Spell On You", therefore enchanting all the adults, causing them to dance forever. After this, the children lead the witches to the school after Allison gets an idea from a restaurant, and after unwittingly walking into the furnace, they are locked in and the children burn them alive.

However, they did not die due to the curse protecting them from death until sunrise, and they end up capturing and locking up the two bullies that make fun of Max after they incidentally refer to them as ugly, as well as call them "chicks", which they find insulting. Winifred, desperate for her eternal youth, decides to try and make the potion from memory. Sarah, surprisingly, shouts out the correct ingredient, but is hushed by Mary who thinks Winifred has all the right answers. At Max's house though, Max and Allison open the book, therefore allowing it to send out a signal to the witches, who fly to the house using a modern cleaning broom, mop and vacuum cleaner as improvisations for their stolen broomsticks, take the book and kidnap Dani and Thackery. Sarah is instructed to sing her siren song to all the children of Salem so they will go to the Sanderson house.

After brewing the potion again, they try to get Dani to drink it ,but are stop by Max who tricks them into thinking the sun has risen by using the headlights of a car. They soon realize they have been tricked, follow the children back to the cemetery and attempt to get Dani to drink the potion again, though Winifred drops the potion whilst Sarah tries to help Mary escape the children. Max catches the potion and threatens to smash it, but drinks it instead after Winifred says she'll kill Dani if he did that. After a struggle with Max, Winifred and the boy both fall to the ground and Winifred starts to take his life force, but the sun comes up. Winifred turns to stone and explodes in green light whilst Sarah and Mary implode in purple and red light.

Winifred will appear in Hocus Pocus 2.[1]

Winifred's most striking feature is her fiery red hair, which she wears in a distinctive, curled bouffant style that resembles the shape of a heart. She wears shades of green that contrast nicely with her hair in the form of a richly-embroidered velvet robe over a green and deep purple dress. Eyebrow-less, buck-toothed, and with claw-like fingernails, Winifred cuts a memorable figure enhanced by her strongly rouged cheeks and uniquely lipsticked mouth. She had striped green stockings and shoes with curved points. When she went outside, she wore a dark green hooded cloak.

Winifred is the most powerful and most intelligent witch, with a particular gift for dark magic. Winifred's signature power is her electrokinesis, which manifests itself as green lightning bolts from her finger tips, which is most useful when used in combat. Winifred is also shown to be a skilled necromancer, as shown when she magically awoke and commanded the zombie of Billy Butcherson from his grave. Winifred is very adept in the casting of spells and the brewing of potions which she often performs with the help of her sisters, with such dark incantations and recipes originating from her spell-book. According to Thackery, she has the ability to sew people's mouths shut, just like she did to Billy. Like her sister Sarah, Winifred can bewitch people through her singing voice, only limited to adults. Winifred is also very capable at broomstick flight, in which she can also fly with a standard sweeping broom as an alternative to her normal broomstick.

Winifred is highly intelligent, dramatic, sadistic, cruel, smart, temperamental, clever, logical, competent, wise, witty, and evil, which makes her all the more deadly if one isn't careful. Extremely vain, she is deeply offended whenever she is called ugly and swiftly punishes anyone who dares do so. According to Thackery Binx, when she caught her lover, Billy Butcherson, cheating on her with her beautiful sister Sarah, she flew into a jealous rage and poisoned him, sewing his lips shut with a dull needle for good measure, and for being unfaithful to her, and due to this, Winifred is described to be always the most jealous type among her sisters.

As the eldest of her sisters, Winifred is their leader, though she probably would be anyway due to her cunning and competence, traits which her sisters lack. She is also shown to be much more smarter, clever, ruthless and observant than her younger sisters. Mary is her right-hand witch and compliments Winifred constantly, but Sarah's air-headed idiocy in particular frequently exasperates her to no good end. However, Winifred tolerates them either because her beloved mother asked her to, or because they each have invaluable, unique powers necessary for her plans. Her own unique power is electrokinesis, which can easily and painfully subdue pesky older siblings who get in her way.

But if there is one thing she truly loves in the world, it is her beloved spellbook. Given to her by the Devil himself and able to magically change its contents to fit the situation, it is a priceless treasure that she absolutely adores. When she speaks to her book, she mostly cares for, and mostly kind to it, just like the book is her own child.

Her spellbook helps her find the perfect spells and potions to cause misfortune to others, be it painfully transforming her victims into other creatures or brewing a potion to suck away their life-force. Winifred enjoys harming others with wicked glee and even when facing execution, her sarcastic, cruel sense of humor remains unfazed. 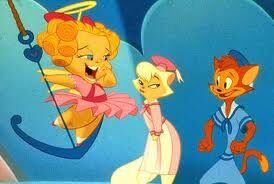 "Oh, look. Another glorious morning. It makes me SICK!" 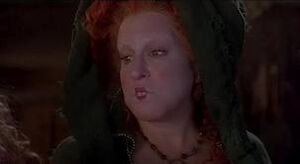 Winifred after she regained her youth. 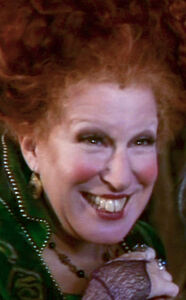 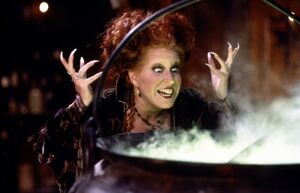 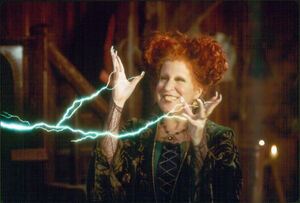 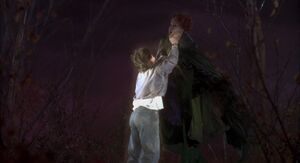 Winifred and Max in one last battle, as Max fights back against Winifred as she tries to suck his life source. 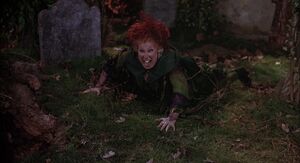 Winifred's breakdown, as she gets desperate to get Max's life source. 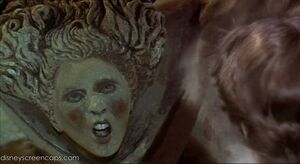