Winnie Harper is a Pacific Vista cheerleader captain and the main antagonist of Bring It On: All Or Nothing. She is at first Britney Allen's "best friend" but eventually, her worst enemy. When Britney moves to Crenshaw Heights, Winnie took control of the place as captain of the Pacific Vista Pirates. She is a cruel captain and works hard for the squad. After Winnie embarrasses herself at the homecoming dance by admitting she had sex with Brad Warner and had finally beaten Britney at "something she couldn't do", Britney chastises her being too much of a backstabber and walks away, leaving Winnie humiliated and defeated.

She was portrayed by Marcy Ryan.

Winnie is a good leader but she makes her team suffer a lot. The team would prefer Britney than Winnie. She held her practices outside the gym which is a bad choice. She also forced Amber to do the illegal helicopter stunt in the competition when the judges are gone. She also wants Brianna, the fattest cheerleader, to lose weight and she forced her to run and skip meals before competitions.

After Britney transferred to Crenshaw Heights, Winnie takes advantage of Brad's lust for sex and begins to entice him. She starts by dancing seductively via twerking her buttocks at him in her short shorts, spreads her legs wide open for a quick five seconds, and then takes off her jacket and gyrates, grinds and crawls like a cat on the floor while eyeing him to the music. This dance session gives Brad an erection and is won over by Winnie. He immediately asks her if she can help him study that weekend and Winnie, knowing he never studies and that he desires sex for than ever, agrees and they begins an illicit affair together behind Britney's back, much to the horror of the Pacific Vista Pirate cheerleaders.

Winnie is a very attractive woman with blonde hair and beautiful eyes. She is naturally thin and maintains a good posture. She is also racist and anti-Semitic, as she's judges Britney's friends at Crenshaw Heights by their race and color of their skin, and insults Amber by calling her "Crouching Tiger" as a racial slur. She skips school on purpose for "emergencies", example one being because of a singular zit on her forehead. 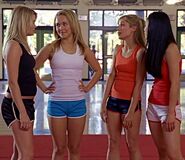 Winnie and Brad exposed of their affair and deceit.

Add a photo to this gallery
Retrieved from "https://villains.fandom.com/wiki/Winnie_Harper?oldid=3370957"
Community content is available under CC-BY-SA unless otherwise noted.