Lord of the Manor of Beldingford

Lord and owner of Beldingford Manor

Corrupt Aristocrat
Lord Winston Beldingford is a minor antagonist in Hitman: Contracts and the main antagonist in Beddingford Manor mission. He was a wealthy British man, suggested to be a nobleman.

Lord Winston was the hedonistic owner of Beddingford Mansion and secretly partook in human hunting at his manor, with his son Alistair Beldingford and their select group of friends.

He was also a pervert and even built a secret passage and two-way mirror near his bedroom that allows him to spy on his maids showering. It was stated that he even seemed to have sexual success with them, as he shared his bed with one maid during the level, but it was implied that they otherwise dislike him. It is implied in the briefing that he regularly fires and rehires new staff.

On a night of another hunting party, Lord Beldingford abducted Giles Northcott, the son of a wealthy British entrepreneur, as another prey. The said entrepreneur hired 47 and ICA to rescue his son and assassinate Lord Beldingford and his son, Alistair, to put an end of this killing party.

In HITMAN (2016), a picture of Lord Beldingford and his son was seen in the tornado shelter on the Shadow Client's private militia training site in Colorado in the mission Freedom Fighters, so the militia seems to know about his assassination in 2004. 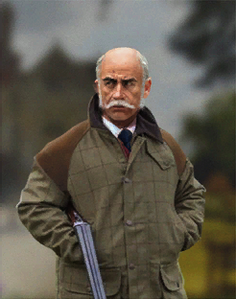 Lord Beldingford's photo in Lucas Grey's collection.
Add a photo to this gallery

Retrieved from "https://villains.fandom.com/wiki/Winston_Beldingford?oldid=4207944"
Community content is available under CC-BY-SA unless otherwise noted.