Leader of the Weasels

Winston The White Weasel, or just Winston (also known as Noroi in the Japanese version) is the main antagonist of the 2015 Japanese computer-animated film Gamba: Gamba to Nakama-tachi (or Air Bound in the English version), which is based on the 1972 novel The Adventurers: Gamba and his Fifteen Companions by Atsuo Saitō. He is the evil and manipulative leader of an army of weasels whose goal is to oppress the mice and worse yet.

He was voiced by Mansai Nomura in the Japanese version, and Jon Lovitz in the English version.

Winston is described as both a demon and a monster. He is humble, polite, charismatic and enigmatic at first, but that hides his true personality: a cruel, lying, vile, and sadistic creature. He is a great manipulator capable of sowing doubt, fear and loss of hope at the same time. He never shows fear or worry, proving a high opinion of himself, which drives him to underestimate his adversaries, sometimes even with contempt. This is mostly shown when he is almost defeated the first time, he becomes completely more enraged, wilder, more brutal, and crazier, whereas having almost been defeated by rodents is an insult.

For a long time, Winston has been known to have sown fear in the hearts of all those who had the misfortune of crossing the path of the white weasel, whose name alone frightened many people.

One day, a mouse named Rusty met Winston and survived but received many scars and left her traumatized by this encounter.

At one point, Winston and his weasels arrived on Dream Island and began to terrorize the mice that live on the island, forcing them to hide to the rocky shores; the weasels also attacked native birds, destroying many of their eggs in the process.

On Dream Island, Winston feels the loss of a weasel near the cliffs and concludes that the mice hide there.

At night, the weasels darken the hiding place of the mouse with Winston smiling viciously. The white weasel admits to being delighted to have found their hiding place and asks who was able to defeat one of his weasels, although he quickly guessed that it was Gavin, before laughing again. Slightly impressed by the young mouse's courage, Winston says the mice will not win against them and suggest they surrender. Winston then notices Rusty among the mice and asks if they have met before Rusty confirms but this time he would beat him. Amused by the mice, Winston announces that it will be glorious then his henchmen begin to gather fruits for his diabolical plan. All of a sudden, Winston announces a peace ceremony and the weasels begin to dance and Winston invite his enemies to dance with them all by launching a wave hypnotic eyes that mesmerize the majority of mice.

As the hypnotized begins to almost reach the water's edge, Clarence the leader of the Dream Island mice, reaches the shore and bites a weasel who in turn attacks him until Winston tells him to stop before order the other weasels to stop the dance, which stops hypnotism. A wounded and overpowered Clarence warns his comrades not to be fooled by the weasels before facing Winston to tell him that he will never cheat them again and that even after he's gone, Winston loses. The white weasel smiles sadistically, while psychically ordering a weasel to hit Clarence at sea, drowning him. With Clarence's death, Winston sends his troops to attack the mice. The weasels are slowly taking over and his on the verge of killing them all, much to Winston's delight but when he sees the sun rising, he calls his troops to come back and promises the mice that they will come back the next night.

The following night, the weasels approach again from the hiding place of the mice. That's when Gavin goes out to fight the weasels all alone, which Winston calls brave and foolish at the same time. The young mouse manages to dodge the attacks of the weasels and is faced with Winston. Winston admits to being impressed and Gavin tells him that he has not seen anything yet before jumping on the weasel who is trying to scratch him but he manages to dodge and finds himself trapping him, calling the white weasel too slow to catch a mouse before running again. Realizing that Gavin is just diverting, Winston recalls the majority of his troops while others chase Gavin. The weasels start climbing the hiding place with Winston at the top only to find that the mice have run away but he notices a release leading to the sea. He finds the mice trying to escape by the ocean and after telling them that they were wrong to believe that they could escape him, weasels enter the ocean.

The few mice still in the water are quickly damaged by their assailant and find themselves surrounded on a piece of wood. Winston joins his troops and sadistically expresses his intention to play with his food like a child, while declaring that he only wished that Gavin be there to see what will happen. Before the weasels can slaughter them, Gavin arrives in the air on the back of a bird, Clarissa accompanied by other birds that once were attacked by weasels. The birds take over the weasels by driving them over from the sky but Winston managed to beat several effortlessly until Gavin jumps on his head and then two bird rushes at the same time and drives him underwater. Winston struggles and manages to get rid of the two birds then Clarissa tries to hit him but the white weasel catches him and starts strangling him but Gavin, still clinging to his head, makes him let go by biting his nose, allowing to Clarissa to attack him with four other birds that push him at high speed deep within the abyss.

At dawn, with the disappearance of their leader, the remaining weasels return to the shore of Dream Island while being slightly hunted by the birds. Unfortunately, Winston manages to come back to the surface and becomes completely enraged. He yells that they are going to regret having dared to try to beat him before unleashing violently on mice and birds until Gavin provokes him once again. Exasperated, Winston mocks the temerity of the young mouse with a evil laughs, before swimming at high speed and trying to dive on him to kill him, but Gavin manages to grab him and bite him on his neck as he jumps on him. Winston tries to get rid of Gavin until the rest of the mice attack, biting him everywhere. As he struggles, a huge wave arrives on the mice and the weasel and then begins to attack them. Winston refuses to believe that this is the end while the wave engulfs them. One by one, the mice lose hold with the exception of Gavin who is flowing more with Winston. Deep in the ocean, knowing that its end is near, Winston tries one last time to finish with Gavin. He tries to catch him but Gavin is pulled by a another mouse, Shelly. Winston looks one last time as Gavin and Shelly raised to the surface before finally drowning, ending the tyranny of the white weasel forever. 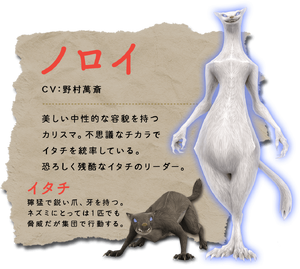 Winston sending telepathic order to his weasels to finish Clarence.

Winston sending his army against the lair of mice.

Winston attacked and bitten by the mices, as huge wave rushes on them.

The end of the White Weasel.
Add a photo to this gallery

Retrieved from "https://villains.fandom.com/wiki/Winston_the_White_Weasel?oldid=3837288"
Community content is available under CC-BY-SA unless otherwise noted.