Leader of the Deader cult

Killing his followers and resurrecting them.

Winter LeMarchand is the main antagonist of Hellraiser: Deader. He is the leader of the Deader cult.

He was portrayed by Paul Rhys.

Winter is the leader of a cult known as the Deaders. Being the descendant of Philip LeMarchand, the toymaker, Winter believes himself to be the rightful owner of the Lament Configuration. Due to the fact that he is not able to open the box himself, he believes that only mentally unstable people may be able to do so-thus forming the Deaders-in which he kills his own followers (by making them kill themselves) and resurrects them later. Any Deaders who lose faith in him are punished by having their body rot while they are conscious. He is ultimately tracked down by reporter Amy Klein.

When Amy reaches the underground home of the Deader cult, she witnesses Winter resurrecting one of the cult members. Winter tries to influence Amy, and sets her up to be killed and resurrected as a Deader. Instead of stabbing herself, Amy throws the Lament Configuration away, and summons Pinhead and his Cenobites. He accuses Winter of invading his domain, and tears him apart with his hooked chains. 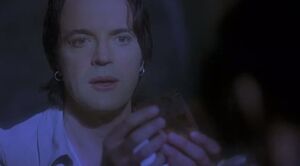 Retrieved from "https://villains.fandom.com/wiki/Winter_LeMarchand?oldid=3946723"
Community content is available under CC-BY-SA unless otherwise noted.