The Winter Soldier is a Marvel supervillain and an enemy to Captain America. He was originally known as Bucky who was both a close friend and sidekick to Steve Rogers/Captain America during World War II, but during their last mission together, Bucky was declared dead; he was later revealed to be reprogramed as a Soviet assassin. 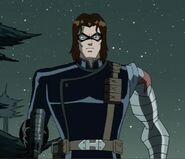 Winter Soldier in The Avengers: Earth's Mightiest Heroes
Add a photo to this gallery

Retrieved from "https://villains.fandom.com/wiki/Winter_Soldier?oldid=3234695"
Community content is available under CC-BY-SA unless otherwise noted.