Winter
The Warlock
Mr. Warlock
Hermit of the North

Cryokinesis
Control over his minions
Teleportation

Watching over the Mountain of the Whispering Winds.

Killing anyone who comes near his mountain.
Creating snowstorms.

Destroy anyone who trespass on the Mountain of the Whispering Winds (formerly).

The Winter Warlock, later simply known as Winter, is a major antagonist-turned-supporting protagonist of the 1970 animated Christmas special Santa Claus is Comin' to Town. He is an immortal hermit with vast magic that lives on the Mountain of the Whispering Winds, and attacks any who dare come near his territory. Later in the special, his icy heart is melted by Kris Kringle/Santa Claus' kindness and warmth, leading him to become an ally and friend of Father Christmas.

He was voiced by the late Keenan Wynn, who also played Vince Heber in Disney's Smith!, Alonzo Hawk the evil business man that tries to demolish good valuable buildings (which is a crime) in Disney's Herbie Rides Again,and Celaeno in The Last Unicorn.

The Winter Warlock's past is unknown, but it is known that he was an outcast and hermit, who made his home on the freezing slopes of the Mountain of the Whispering Winds, where he practiced his magic and destroyed any who dare disturb him.

Many years later, after Kris had grown, he decided to take the Kringle family's toys to Sombertown across the Mountain, as none of his elderly family dared to face the Warlock. When he approached the Mountain with his penguin friend Topper, the Warlock threatened him and warned him to turn away or die. Kris fled to Sombertown, but the Warlock planned to trap him on the return trip.

Kris eventually made it to Sombertown and began giving toys to children, only to be chased away by the Bugermiester and his soldiers, who had outlawed toys. He managed to escape to the Mountain, and was then captured by the two evil and sentient tree monsters serving the Warlock. The Warlock then appears to Kris, planning to destroy him.

However, Kris offers the Warlock a gift, and the Warlock decides to indulge him, though he suspects a trick. In spite of this, Kris actually gives the Warlock a present in the form of a toy train. The Warlock is so touched by Kris' kindness that his icy heart melts and his frightening appearance fades. He then insists Kris call him Winter, but wonders how long he can stay reformed. Kris teaches him that changing from evil to good is as easy as taking one's first step, and Winter reforms.

Winter then agrees to help Kris in his mission to bring toys and gifts to children with his magic, and introduces Kris to the magic crystal snowball, which allows him to see other people, Kris would later use these to find out if children have been naughty or nice. Later, Winter lets the Kringles move onto his mountain. Though he admits he feels crowded, he does not mind as he is now loved.

Later, the Burgermeister sets a trap for Kris. Kris' lover Jessica goes to the Kringles to stop him from visiting the town, but is too late. She meets Winter and pleads with him to use magic to help Kris, but Winter reveals that, with the melting of his heart, his powers have vanished and he is no longer magical. To make matters worse, Brimsley and soldiers followed Jessica and capture the Kringles and Winter, throwing them all in the dungeon.

Jessica sneaks to the dungeon and finds Winter, and begins to work with him on how to free them and a captured Kris and Topper. He shows her some of his old, powerless trinkets and leftover items, one of which being magic feed corn, a corn that can make reindeer fly when eaten by them. Jessica takes the corn and gives it to eight of Kris' deer friends, who then fly into the dungeon and free everyone, including an uplifted Winter.

Much time passed, with Kris, Jessica, the Kringles, Topper, and Winter still living on the run. Kris would later ask Jessica to marry him, and a grand wedding took place with the Kringles and the animals decorating the trees of the forest in celebration. Winter summons a small amount of magic to light the trees with many colors, creating the first Christmas trees.

The group eventually made their way to the North Pole, where they settled down and built a castle and workshop. Kris (now Santa Claus) decides he must limit his gift giving to one night a year, and chooses Christmas Eve.

Over the many years in the North Pole, Winter gradually manages to figure out magic again, and eventually gets all of his magic powers back, this time using them for good to provide white Christmases and aid his friend Santa for all time.

During the credits, he sees the postman S.D. Kluger delivering letters to Santa and hitches a ride on his buggy to visit his old friend.

The Winter Warlock starts off as malicious, manipulative, sadistic and cold. He despises everyone and (judging by how the animals hide baby Kris) is even willing to hurt a baby. He enjoys hurting people and keeping up his monstrous and frightening reputation.

However, after Kris manages to warm his heart, he is shown to mostly be lonely and insecure, having never received a present or even love before. As his bitter and cruel personality fades, he becomes helpful, kind and soft-spoken. He remains uncertain, especially after losing his powers, and doubts himself, but remains a friendly ally. He later would get back his powers and confidence, resulting in him being dutiful and powerful, while still heroic and pleasant. 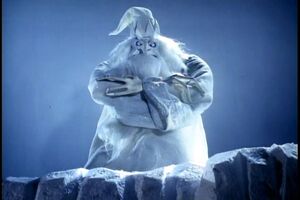 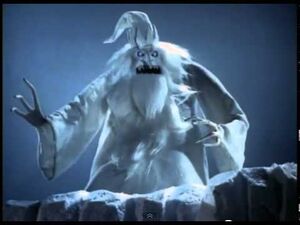 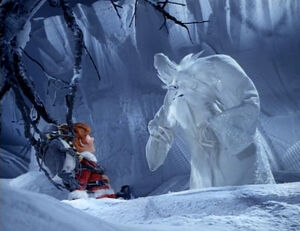 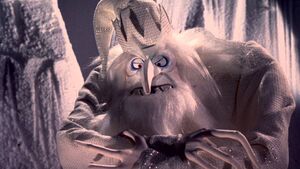 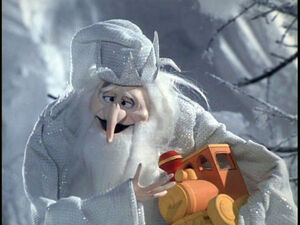 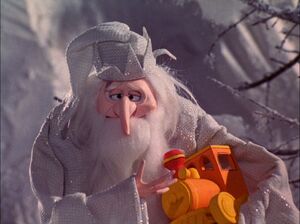 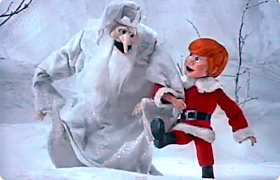 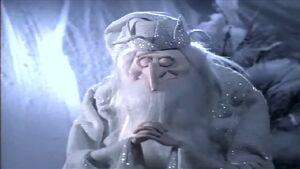 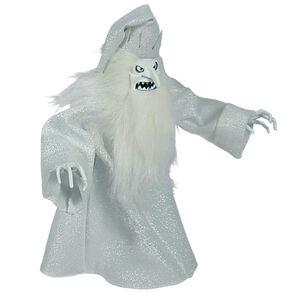 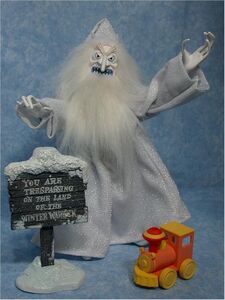 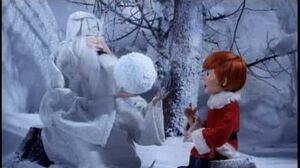 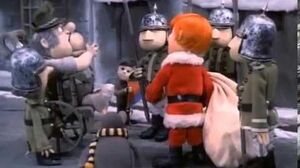 Retrieved from "https://villains.fandom.com/wiki/Winter_Warlock?oldid=4208131"
Community content is available under CC-BY-SA unless otherwise noted.