Ruler of the North Pole (formerly)

Rule North Pole again.
Get rid of Rudolph the Red-Nosed Reindeer. (all failed)

Winterbolt is the main antagonist in the 1979 Christmas television special Rudolph and Frosty's Christmas in July. He’s an evil snow sorcerer who creates blizzards and snowstorms.

He was voiced by the late Paul Frees, who also played Evil Star in The Superman/Aquaman Hour of Adventure, Aeon the Terrible in Rudolph's Shiny New Year, Burgermeister Meisterburger and Grimsley in Santa Claus is Comin' to Town, Jack Frost in Frosty's Winter Wonderland, Quizzler in Mouse on the Mayflower and Boris Badenov in the Rocky and Bullwinkle series.

With Rudolph saving Christmas, Winterbolt had to get rid of the reindeer first, but because Lady Boreal spread her magic everywhere in the North Pole, his powers had no effect on Rudolph. He had to get Rudolph away from the North Pole and make him do something evil to make his nose stop glowing. When Rudolph's friend Milton arrived to pick up ice cream for a circus, Winterbolt used this as an advantage. He also has the power to control one's thoughts and he "hypnotized" Milton to convince Rudolph to perform in the circus, which he agrees. Winterbolt then appears to Rudolph and Frosty, telling them he’s a gentle snow wizard and he gives Frosty and his family snow amulets which will prevent them from melting in the summer heat. However, the amulets would only work until the end of the circus finale, so he also convinces Santa to pick up the snow family.

Winterbolt's plan was working; while Rudolph was working in the circus, Winterbolt recruits a reindeer reject named Scratcher to get Rudolph to do something evil. He then traps Santa and Mrs. Claus in a storm which would severly delay them of getting Frosty. Scratcher tricks Rudolph into giving Sam Spangles, disguised as a cop, the circus money behind everyone's backs. Winterbolt then went down to the circus on his own sleigh, mushed by snakes, and double-crosses Rudolph. He tells Rudolph his diabolical plan and how it worked as Rudolph could no longer make his nose glow. He then forbade Rudolph from telling everyone the truth because by doing so, Frosty and his family would melt.

As Frosty was the only one who witnessed what happened, he tries to negotiate with Winterbolt. Winterbolt learns, through the genie, of Frosty's origin and how his hat keeps him alive. Winterbolt now wants the hat, so he can make an army of evil snowmen. He tricks Frosty into giving his hat in exchange of Winterbolt curing Rudolph's nose. Rudolph discovered what had happened and chased Winterbolt to get the hat back. Winterbolt unleashes his snakes but Rudolph outmaneuvers them. He then charges at the wizard, making him drop the hat. Rudolph grabbed the hat and his courageous act brought his nose back to life and he ran off to fix everything. With Frosty saved and the circus money given back, everyone forgives Rudolph but Winterbolt appears for one final standoff. The circus ringmaster named Lady Lorraine throws her iron-made guns at his scepter, breaking it. After all, the scepter was the source of Winterbolt's power and without it, he was powerless. His final words were: "No! My- My powers are gone! When the scepter dies, I go too! I turn- I turn- I turn... into... a tree...". With his being reduced to a lifeless tree forever, Lilly concludes, "What an exit," indicating that Winterbolt was too dangerous to be left alive. His storm cleared up for Santa and his wife to get to the circus. 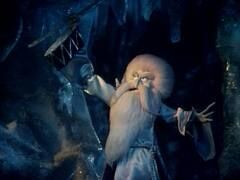 Winterbolt about to face off with Lady Boreal. 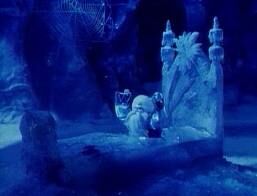 Winterbolt awakening from his long slumber. 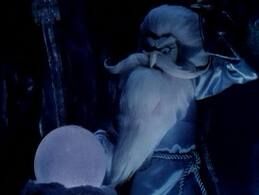 Winterbolt learning about Santa Claus through his crystal ball. 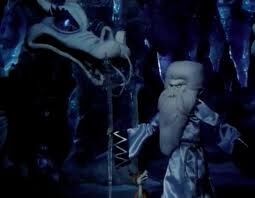 Winterbolt commanding his dragons to brew up the blizzard of the century. 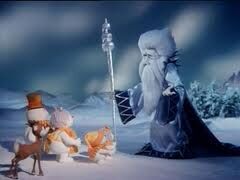 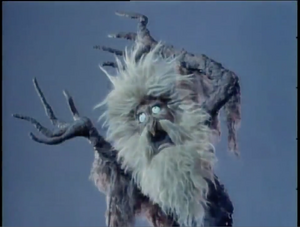 Winterbolt meeting his demise as he is turned into a lifeless tree after his scepter is destroyed. 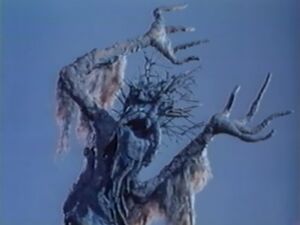 Winterbolt's final fate.
Add a photo to this gallery

Retrieved from "https://villains.fandom.com/wiki/Winterbolt?oldid=4118043"
Community content is available under CC-BY-SA unless otherwise noted.