Right Hand Man
William Wintergreen is the usual butler of Deathstroke who was originally in the SAS (Special Air Services). Wintergreen was the one who saved Deathstroke's life, where Deathstroke returned the favour afterwards which was one of the reasons he was dishonorably discharged and became the mercenary we know today.

Wintergreen is considered to be the evil counterpart of Alfred Pennyworth, Batman's loyal butler.

He was later killed by Deathstroke while possessed by Jericho. Wintergreen claimed that he knew that one day Slade would kill him. He was later reanimated as one of the Black Lantern Corps where he attacked his former master.

Bill Wintergreen appears in the television show Arrow. This version is the show's first incarnation of Deathstroke, and he is as adept at hand-to-hand combat as Slade is.

He was portrayed by Demore Barnes. 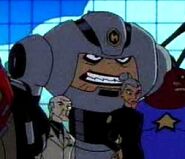