Get back at Nos-4-A2 for biting him (succeeded).

The Wirewolf is a minor antagonist of the Buzz Lightyear of Star Command series. He was known as Space Ranger Ty Parsec, who was bitten by the space vampire Nos-4-A2 that led to his transformation.

He was voiced by Steve Hytner.

Ty first appeared in the episode "The Wirewolf", where he patrolled the planet Canis Lunis until an attack from Nos-4-A2. While Ty was in combat with the energy vampire, Nos-4-A2 flew himself and Ty up into the beam, which gives power to the planet from the moon's radioactive energy, and bit into Ty's skin. After NOS-4-A2 fled, Ty started to mutate into some sort of electronical canine, later given the title of "Wirewolf". When having discovered that this transformation only happens in the light of the Canis Lunis moon, Buzz told Booster to destroy the moon. Once the moon was destroyed, Team Lightyear believed that the Wirewolf was finished for good, but Ty was put into suspension until further notice.

However, it wasn't until in the episode "Revenge of the Monsters", Nos-4-A2 kidnaps Ty and fits him with a Canis Lunis moonrock, which turns him back into the Wirewolf. As it turns, Nos-4-A2 plans to use the Wirewolf to turn everyone into the galaxy into Wirewolves for him to feed on. To do so, Nos-4-A2 betrays his master Emperor Zurg by taking control of Planet Z and turning his army of Hornets into Vampire Hornets. Nos-4-A2 then create a giant laser beam using the Wirewolf's DNA to turn everyone in the galaxy into Wirewolves. However, Team Lightyear (with the help from XL) arrives to the rescue, freeing the Wirewolf and letting him fight against Nos-4-A2, who ends up being impaled before exploding to his death. With NOS-4-A2 destroyed, Ty was turned back to normal along with everyone else in the galaxy, ending the curse of the Wirewolf for good.

The Wirewolf is extremely hostile, dangerous, aggressive, and vicious. It shows nothing more than typical animal behavior. It snaps at robots, rips them to shreds, and otherwise acts like a very ferocious and nasty canine. It can show bits of Ty's personality, however, such as the instance where Buzz Lightyear tried to reach out to the former Space Ranger in a heartfelt plea for Lightyear's life.

The Werewolf has complete domination over the following attributes: superhuman strength and durability, as well as incredible strength and the most array of senses to match its cunning primal adaptability. The Wirewolf is constructed of a strong metallic material - possibly a steel alloy or titanium. The creature by itself seems to possess the intelligence of a living wolf and acts primarily on predatory instinct. With the later influences from the host, it appears to have the capability to show more human-like thought and emotion.

The Wirewolf communicates more commonly in growls, howls, and other primal methods. It has the ability to walk on two legs, but can run faster on all fours. It can also break down the thickest of metal doors, and its claws can puncture straight through materials of the highest density with minimal effort. Retractable wings also at its disposal grant the Wirewolf the gift of flight. It may also shoot out wires from its hands; these wires can grab onto people or objects and can be used to capture or drain its targets of electrical energy. The creature can also use its claws to climb even the slickest of surfaces. Other abilities may be present, but have not been fully explored. 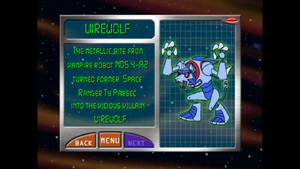 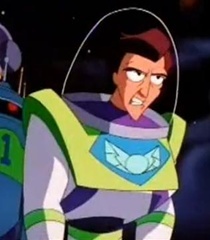 Ty Parsec
Add a photo to this gallery

Retrieved from "https://villains.fandom.com/wiki/Wirewolf?oldid=3460884"
Community content is available under CC-BY-SA unless otherwise noted.