Leader of the Black Moon Clan

Obliterate the Legendary Silver Crystal and gain total domination over time and space.

Wiseman, also known as the Death Phantom and the Doom Phantom, is the true master of the Black Moon Clan/Negamoon Family and the main antagonist of Sailor Moon R. He is also Chibiusa's arch-nemesis.

In Japanese, he was voiced by the late Eiji Maruyama in the original series and Hiroshi Iwasaki in Sailor Moon Crystal. In English, he was voiced by Tony Daniels in the DiC dub and Steve Kramer in the Viz dub.

Later revealed to be an incarnation of Chaos, Wiseman was originally named Death Phantom and he was a human being who lived in Crystal Tokyo before he was exiled from Earth by Neo Queen Serenity for using his powers to stage an uprising. Death Phantom ended up on the barren planet of Nemesis, gradually losing his humanity as he became the planet's sole inhabitant. But upon death, Phantom's consciousness became one with the planet itself while producing the Malefic Black Crystal. Cloaking his decayed human body in robes, Death Phantom took on the alias of Wiseman and enlisted the Black Moon Clan to aid him in wiping out the Legendary Silver Crystal.

As it was shown, he cares little of his pawns and even kills Rubeus When faced with a new conduit for power, in the form of Chibiusa, Wiseman makes her his Black Lady. When Demande destroys Wiseman's original body, the figure reveals his true identity as Nemesis. With all of his followers gone forever, and Black Lady reverted to Sailor Chibi Moon, he creates a dark energy swirl to kill the Sailor Guardians. Sailor Moon and Sailor Chibi Moon destroy Wiseman by obliterating Nemesis with a Double Moon Princess Halation attack.

At first, Wiseman appears as the advisor of Rubeus during his attempts to take over Crystal Tokyo, and also the advisor to Prince Diamond, but is soon revealed to be manipulating them so he can destroy the world with dark energy. He gave Emerald a crown which transforms her into a dragon, resulting in her being destroyed by Sailor Moon. Wiseman then tricked Rini into believing that no one loved her, and he transformed her into Wicked Lady.

Sapphire suspected Wiseman, and soon overheard his plan to kill him and Diamond, and that he was working for an entity called the Doom Phantom. Sapphire attempted to warn his brother, but Wiseman killed Sapphire with an energy wave. Diamond planned to execute him after taking over Tokyo, but did not initially believe Sapphire until Sailor Moon made him realize the truth. Diamond fought Wiseman, and eventually sacrificed himself to save Sailor Moon from an attack by Wiseman, but was able to injure him so that his arms were destroyed, but he came back together.

Wiseman attempted to use the Dark Crystal and Wicked Lady to open the Dark Gate and send dark energy through the planet Earth to destroy it and Wicked Lady, but Sailor Moon and Darien got through to her and she became Rini again. Wiseman revealed himself to be the Doom Phantom and attacked Sailor Moon, who transformed into Princess Serena, or Neo Queen Serenity, and entered a beam struggle with Wiseman. Rini used the Silver Crystal of the future to transform into Princess Rini, and together Serena and Rini unleashed an energy explosion that completely destroyed Wiseman and his true form which he proclaimed it to be his "master", Doom Phantom. The Dark Crystal was decimated along with him.

Wiseman normally has the appearance of a levitating old man in a hooded cloak carrying around a crystal ball. It was during his fight with Demand that Wiseman's body is revealed to have reduced to a skeletal corpse.

In life, Death Phantom was exceptional and dangerous sorcerer who possessed Evil Sight and Beast Arms abilities. After his transition into Wiseman, he gains additional abilities like using a crystal ball to shoot dark energy waves and dark energy spears. As Nemesis, Death Phantom produces the Malefic Black Crystal and cast an illusion of himself to appear in Earth's orbit that that can inflict damage. 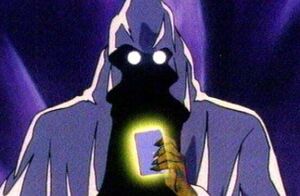 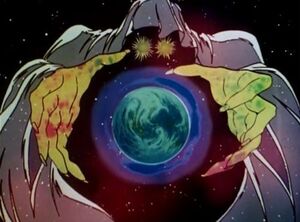 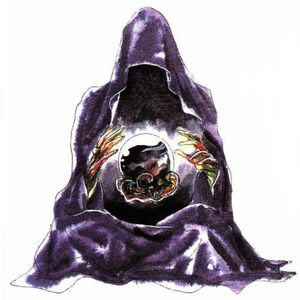 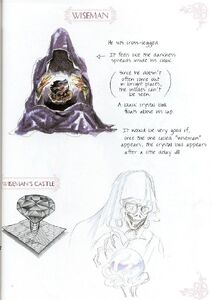 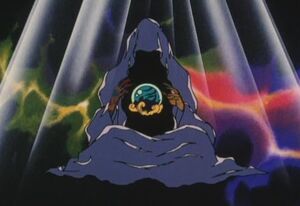 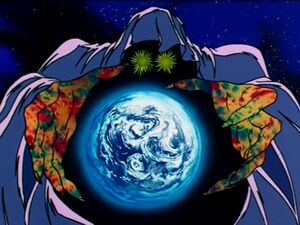 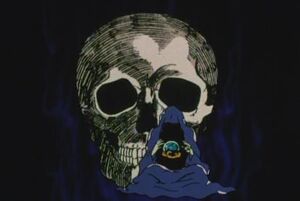 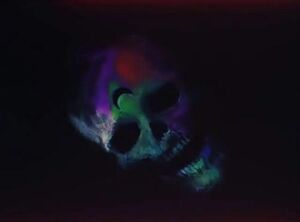 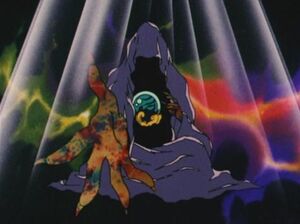 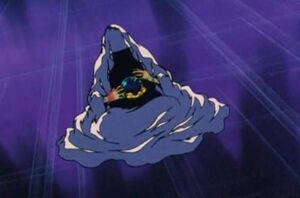 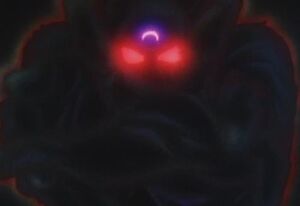 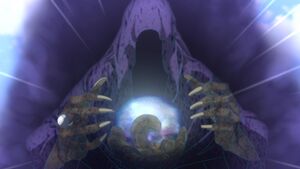