Witch (Babes in the Woods)

Babes in the Woods

The Witch is the main antagonist of the 1932 Silly Symphony cartoon "Babes in The Woods", which is based on the fairytale of Hansel and Gretel but mixes the story with elements of other fairytales such as Snow White - the Witch herself is designed on the classical "wicked witch" of folklore and fairytale, which were often envisioned as ugly old women prone to child abuse and dark magic.

She was voiced by the late Lucille La Verne, who later voiced Queen Grimhilde in Disney's 1937 film Snow White and The Seven Dwarfs as her last film role before her death on March 4, 1945.

The Witch was introduced shortly after the two "Babes" arrived at a gnome village, flying on a broomstick her arrival prompted the gnomes into hiding but the two "Babes" were not so lucky and were discovered by the Witch.

The Witch offered the pair a ride on her broomstick and took them to a house made of candy, allowing them to eat their fill before luring them inside - once inside she quickly revealed her true nature and captured the pair, showing them many cages filled with animals which were once children, she then transformed the young boy into a spider and chained him up next to a cat, the cat scratched at the Witch and she flew into a rage, going to her cauldron she threw some of its contents onto the cat and turned it to stone.

The Witch then grabs the young girl and gets ready to turn her into a rat only to have her potion smashed out of her hand by a small arrow, once again enraged she tosses the young girl into the cellar and gives chase to a gnome who came to rescue the children.

As the Witch angrily chases after the gnome more gnomes arrive and soon a battle is waged between the Witch and the gnomes - meanwhile the young girl manages to get free and uses potions to set the other children free and remove the Witch's curse.

The children then run-out only to find the witch falling from the sky (having been struck down by the gnomes in an aerial assault) - they think fast and run back into the Witch's home and pull out her cauldron, positioning it so the Witch falls right into the cauldron.

The Witch is thus covered in the stone potion, which quickly turns her into stone, making her die. Then, everyone rejoices as the Witch is gone forever and her evil ways can no longer harm anyone. 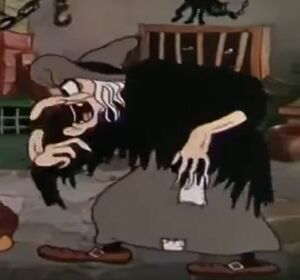 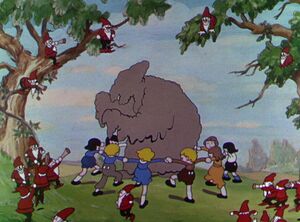 The Witch's fate; turning into a statue as the children dance around her petrified body. 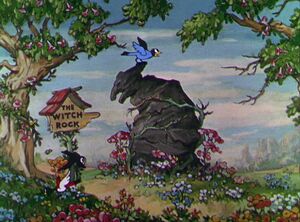 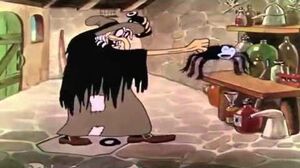 Silly Symphony Babes In The Woods